Joy to the Wolves Excerpt 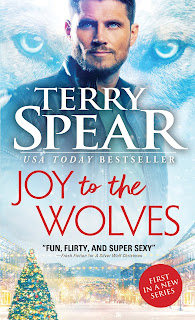 Brooke called the first reindeer ranch she could find the number for while she hurried to leave the boxes outside for the recyclable trash. When she returned to the shop, someone from the ranch picked up the call.

“Hi, I’m Brooke Cerise, and a reindeer calf showed up—­” She quit speaking when she saw a tall, dark, and handsome man walk into her shop wearing a suit, a parka, and a badge. He’d better not be the bozo at the police bureau who had hung up on her!

The man glanced at the reindeer calf and then moved through the customers taking pictures of him. He reached Brooke, his posture saying he was in charge and going to get to the bottom of this. “This deer belongs to Wilding Reindeer Ranch. Do you care to explain why he’s in your shop?” He raised a dark brow. He had an Indiana Jones-­type build—­muscled enough to swing across caverns and climb tall peaks, nice broad shoulders, physically fit, not like he sat around in an office eating too many doughnuts. “This is your shop, correct?”

That was when she smelled the officer’s scent and realized he was a red wolf like her. Wild, wolfish, and an Ivory fragrance. A red-­wolf pack was located outside Portland, but on her visits to see her great-­aunt, she hadn’t had time to meet anyone. She hoped it wouldn’t be a problem for her to move into the area without contacting the pack leaders first. Did he belong to the pack? Not that she could ask him in front of her human customers.

She said to the man on the phone, “Uh, sorry, it looks like I just found where the calf belongs.”

“No problem. Thanks for calling and checking with us.”

“You’re welcome. Have a great day.” She ended the call. “I called it in, but the officer I spoke to thought it was a crank call. The reindeer just walked into my courtyard.”

“I’m Detective Wilding, an investigator with the Portland Police Bureau. I’ve called the ranch, and someone’s coming to pick him up.” He had a nice, manly voice, warm and sexy like one of her favorite narrators of the romance audiobooks that she enjoyed listening to. He took a deep breath of her scent too. She wondered if he’d known her great-­aunt.

Brooke realized she was getting so much publicity that the police must have seen the news that the reindeer was at her open house and sent an investigator to investigate.

“I need to get your statement,” he said, all official-­like.

As if she were at fault for the reindeer calf being here! Hopefully, the other local wolves were a lot more welcoming than he was. That was all she needed though. To be considered a rogue wolf who committed crimes!

“By the way, you don’t leave anything important in your trash, do you? Like credit-­card or bank-­account information without shredding it?”

“Someone was looking at your boxes.”

“Maybe to use for packing boxes?”

More people crowded into her shop. Brooke sure hoped people were going to purchase something and not just come to see the reindeer. Though she had to admit the little fellow made for a great marketing tool with all the social network shares that were going on. It was putting her shop on the map. He was adorable, and he seemed to be enjoying all the company.

Several of the customers were still texting about the reindeer and posting about her shop, and a few people had migrated to the drinks and food and begun to enjoy them. Then a couple of customers brought items over to her checkout counter. Yes!

“Sorry, why don’t you do your police-­officer duty and take care of the reindeer? I’ll give you a statement when things slow down, Officer,” she told Detective Wilding. She didn’t expect him to do anything with the reindeer, but she hoped he’d leave her alone while she was checking out her customers.

“Detective,” he corrected her. He situated himself right next to the checkout counter, waiting for her to finish ringing up her sales.

The ladies thanked her and smiled at the detective, who smiled back at them with a little lift to one corner of his mouth, giving him a charmingly handsome appearance. The ladies took their packages and left. Brooke glanced in the direction of the other people in her shop, wishing a whole bunch of customers would inundate her with merchandise to ring up so she could ignore the detective further, but nope. That meant she was at the detective’s mercy. Again. Darn it.

“Okay, give me your statement now.” He stood there tall and imposing, his dark hair windswept, his dark-­brown eyes capturing her gaze, powerful, demanding. There was no smile for her.

“He was eating holly berries off my shrub. Someone had left the gate open.”

“Usually, I do.” She let out her breath. “I must have forgotten.”

“But you didn’t forget to close the gate.”

He might be gorgeous to look at, but he was annoying her to pieces. She was a law-­abiding citizen, and she wasn’t in the market for a reindeer calf. How could he make her feel like she was guilty of a crime just because she must not have locked her gate last night?

“The latch needs to be replaced.” She hated having to concede that to the detective.

“Faulty latch, hmm,” he said, writing it down.

Oh, for heaven’s sake. You’d think she’d committed the crime of the century!

Joy to the Wolves

Meet the shifters of the Red Wolf pack…

As Christmas approaches, red wolf shifter Brooke Cerise unexpectedly inherits an antique shop in Portland, Oregon. But when a missing reindeer calf turns up on her property, she becomes embroiled in a kidnapping case and the primary suspect of far-too-intriguing shifter Detective Josh Wilding.

Josh doesn’t intend to fall for the mysterious new woman in town, but Brooke gets under his skin from the moment they meet, and he can’t help his instinct to protect her. These red wolves are both on the hunt for love, but there’s a mystery to solve before they can enjoy their holiday happy-ever-after.

USA Today bestselling author Terry Spear has written over forty paranormal romances. Heart of the Wolf was named a Publishers Weekly Best Book of the Year and Billionaire in Wolf’s Clothing was a Romantic Times Top Pick. A retired officer of the U.S. Army Reserves, Terry also creates award-winning teddy bears. She lives in Spring, Texas.