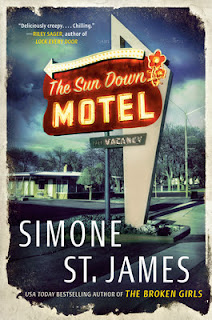 The secrets lurking in a rundown roadside motel ensnare a young woman, just as they did her aunt thirty-five years before, in this new atmospheric suspense novel from the national bestselling and award-winning author of The Broken Girls.
Upstate NY, 1982. Every small town like Fell, New York, has a place like the Sun Down Motel. Some customers are from out of town, passing through on their way to someplace better. Some are locals, trying to hide their secrets. Viv Delaney works as the night clerk to pay for her move to New York City. But something isn't right at the Sun Down, and before long she's determined to uncover all of the secrets hidden…
My Thoughts…
It is only January of 2020 but this will certainly be in my list of top books of the year.    I could not get enough of The Sun Down Motel.    With each page, each character I met, each story that came together, I was pulled more and more into the story.   The ghosts and the visitors to The Sun Down Motel were all intriguing and kept me turning page after page.   I couldn’t wait to see how Simone St. James would pull the storylines together at the end of the book.
The dual timelines were written perfectly.   They told their own stories while overlapping just enough to not lose the reader's attention.    I enjoyed how the characters were portrayed in 1982 and those that were still around in the present were kept similar.   They kept their quirks, kept their attitudes, but showed how they grew up in the time that was between.   The storylines were easy to follow, quick to read, and had twists and turns that kept me guessing at what would happen next.
The Sun Down Motel is a psychological thriller with a tad of paranormal sprinkled throughout the story.    The spooky setting, the creepy customers, and the interesting people of Fells all made this book a must-read. 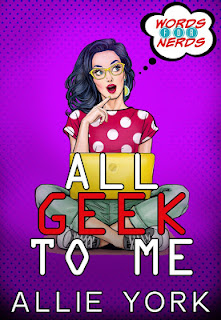 Synopsis:
I, Noralee Reynolds, lead the ultimate nerd life. I own a comic shop, have a great group of geeky friends to work with and wear a different cosplay every day. Since inheriting the family business I’ve had no time for a personal life of my own. Even if hosting a speed dating event makes me wish otherwise.
I, Wyatt Collins, lead a hectic life. As a single dad, I've only got time for two things - raising my son and being a cop. I wasn't looking to cuff myself to anyone. Then I crossed paths with a nerdy comic shop owner who made me think twice.
Things are great until a little self-doubt has Noralee wanting to run away.
Can Wyatt convince her that he can be her real-life superhero?
My Thoughts…
I am so far away from being a nerd like Noralee that when I read what this book was about I wasn’t really sure it was the book for me but because I have read Allie York in the past and loved her books I decided I should give it a try.   I am so glad that I did.   While Noralee speaks comic books and geek, it was geek that I was familiar with.   The references made in the book were characters and movies I was familiar with so I understood her references.  It was fun to let the geek side I didn’t know I had come out and enjoyed this book.
Wyatt, the hot cop, was a fun character.   He was not a geek and did not speak geek.  Yet, he didn’t let this stop him from getting to know Noralee.    I love how he planned their date to include special places and things that would interest Noralee.   He kept her safe from herself, laughed when things didn’t go quite as planned, and accepted her exactly as she is.    The fact that he was a father was never far from my mind, although I am curious at the rest of his story.   There were hints  (like how long ago it was since he had sex and the age of his little boy that were never finished)  there was more to his story and I’d love to know it.
All Geek to Me is a fun book, a quick read.
Thank you to Forever Write PR for a copy of All Geek to Me in exchange for an honest review. 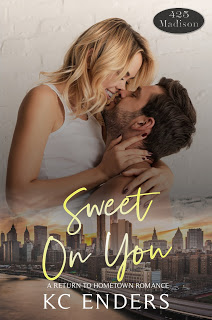 Lyla Dupree
She’s a bubbly, sugary sweet pastry chef. Living her best life in the Big Apple. Luxury
apartment. Successful patisserie. Everything is great–better than great. It's absolutely perfect.
Raleigh Jacobs
He’s grumbly and growly–and so very out of his element–working on a temporary assignment
in NYC. He wants to do his job and get out. Back to the clean air in the mountains near Denver.
Throw them together.
Mix things up.
Turn up the heat and what you get is, quite simply, alarming.
After all, 425 Madison is the perfect place to fall in love.
My Thoughts…
Raleigh Jacobs comes to NY with a huge chip on his shoulders.   He doesn’t want to be there, doesn’t like where his life has left him, and isn’t going to be happy with anything.   As he gets to the apartment, he is sub-leasing the smoke alarm in the apartment next door is going off and it just annoys him more, then he meets Lyla.   He is doesn’t want to make friends with anyone, but she just won’t give up.   She shows up with treats, dinner, and owns the coffee shop that is on his way to work each morning.   Of course, sparks fly between them.
The ties between Lyla and Raleigh are wonderful.   Both are from Colorado, both have histories of relationships that didn’t go so well, and both are attracted to each other.   I enjoyed seeing how Lyla would break down Raleigh’s tough and grumbly exterior to get to his heart.    When Raleigh’s son shows up for a visit the true Raleigh shines through and Lyla can’t help but fall for it.   Love isn’t easy but these two show that with trust, hard work, and an open heart it is worth fighting for.
I love the 425 Madison series for so many reasons.   The stories feature real people who just happen to live in the same location.    Each book is it’s own story and is not contingent on the other books in the series.    The books in this series are quick and easy to read and I often find myself reading them in one sitting because I cannot put them down.
I definitely recommend picking up Sweet on You and finding love at 425 Madison.
Posted by A Soccer Mom's Book Blog at 6:00 AM