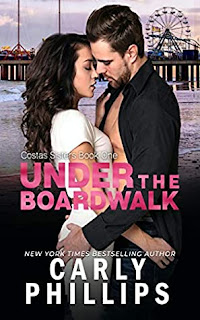 Ariana Costas may be a college professor in Vermont, but she's still a Jersey girl at heart-at least according to her lovable, eccentric Greek family. Then her twin sister, Zoe disappears and her Jersey roots tug hard. Soon Ari is back home, ducking bullets and, to her chagrin, getting rescued by a hunk in a black leather jacket. Detective Quinn Donovan takes one look at the windblown beauty-and then looks again. If this lady isn't Zoe Costas, it's someone who looks exactly like her. Suddenly, Ari's in trouble deeper than the Atlantic at high tide, and Quinn is trying to protect her without spilling his well-guarded secrets ... as déja vu just might become the love affair of a lifetime.My Thoughts...
Ariana is a woman running from her own family, a family that she loves but is not always proud to be part of.    She has moved to Vermont to escape them until her twin is missing and assumed dead.    I enjoyed seeing her come home and see her family in a new light.  Sure, they are crazy with their monkey as a pet, crazy con jobs, but there is no doubt that they love each other.    As the story continues, Ariana realizes that she has missed her family but cannot make any life changing decisions until she finds out the truth about her sister.

As Ariana is trying to figure out what happened to Zoe, she meets Quinn and the sparks fly.   Their relationship was fun and complex.  Quinn was keeping secrets from Ariana all while trying to keep Zoe safe.   Ariana and Quinn circled each other, kept their feelings close to themselves, and were trying to not fall for each other.   I genuinely enjoyed seeing these two get to know each other and fall for each other. 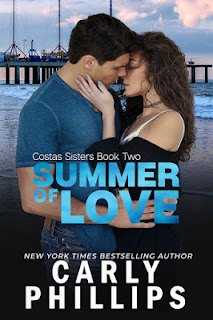 Zoe Costas is a security specialist and a Costas through and through. Her eccentric, rather dubious family runs an Atlantic City spa that's just this side of legit. So Zoe isn't inclined to trust handsome, charming Ryan Baldwin when he shows up claiming to be related to Sam, the girl the Costas family is about to adopt. But Ryan is Sam's uncle and one of the famously rich and snooty Boston Baldwins.Ryan's search for his sister has led him to news of her death, and to a niece he's never met. But someone else has also tracked Sam down — someone who never wanted the child to be found. Ryan is determined to protect Sam and find out what really happened to his sister. And Zoe is just the woman to help him do it. Neither expects to lose their heart in the process.

I read Under the Boardwalk, the first Costas Sisters book, and wondered about what Zoe’s story would be.    Would she be tough?  Would she be open to love?   Had I already met the man that would win her heart?    I had so many questions that I needed answers to.   Summer of Love gave me all the answers plus it let me get to know Sam, the foster sister, and learn more about her story.

Zoe is tough as nails; she loves her family and will do anything to protect them including her foster sister Sam.    When Sam’s uncle shows up at their house she steps in and keeps his true identity a secret.    They play the game of him being a social worker and checking on Sam’s well being all while he starts to get to know the niece he never knew.   I liked how Ryan played along with Zoe, he realized that Sam was safe and loved and that coming into her life would only disrupt it so he had to be careful.   Ryan won me over with the care and respect that he showed the Costa’s family.

During Ryan and Zoe’s care of Sam they developed feelings, circled around each other, and learned to open their hearts.   Zoe was careful and held back from giving her heart easily and Ryan knew that he had to be careful.   The relationship between the two of them was sweet, fun, and steamy.    It was fun. 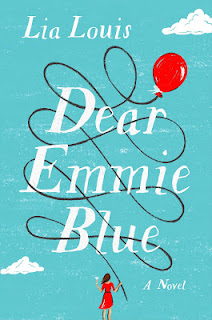 Emmie Blue is about to learn everything she thinks she knows about life (and love) is just that: what she thinks she knows. Is there such thing as meant to be? Or is it true when they say that life is what happens when you are busy making other plans? A story filled with heart and humor, Dear Emmie Blue is perfect for fans of Eleanor Oliphant Is Completely Fine and Evvie Drake Starts Over.
My Thoughts... 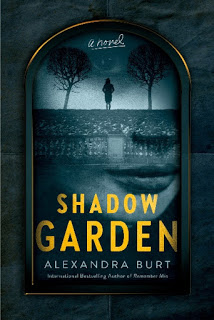 A wealthy woman suspects something is off about the luxurious complex she lives in . . . and she is right, in this riveting domestic-suspense novel from international bestselling author Alexandra Burt.

Donna Pryor lives in the lap of luxury. She spends her days in a beautifully appointed condo. Her every whim is catered to by a dedicated staff, and she does not want for anything.

Except for news of her adult daughter.

Or an ex-husband who takes her calls.

Donna knows something is wrong, but she can't quite put her finger on it. As her life of privilege starts to feel more and more like a prison, the facade she has depended on begins to crumble. Somewhere in the ruins is the truth, and the closer Donna Pryor gets to it, the more likely it is to destroy her.

Umm... hello!   What a ride I just went on.   There were times I had no idea where I was heading or where I would end up but I loved every minute of the ride.     There was no doubt that there was something going on with Donna but I couldn’t be sure what that was.    She seemed to know what was going on, she seemed to understand life, and she seemed to want to find new happiness but she first had to figure out what got her to where she is right now.

Shadow Garden is an amazing story.    Alexandra Burt did a wonderful job of making her characters realistic and not always likable.   The story itself was intriguing and kept me guessing at what would happen next.   This is the first book I have read by Alexandra but I will be looking for much more in the future from her.

Add Shadow Garden to your MUST-READ list on Goodreads