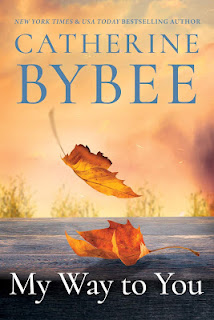 When a wildfire nearly destroys Parker Sinclair’s family home, it’s just one more disaster to add to her mountain of stress. For the past two years, she has shouldered the responsibility of raising her younger brother and sister after their parents’ untimely deaths. Forced to leave college for a crappy job that barely pays the bills, Parker manages her family property, which consumes every aspect of her life. Now winter is coming and the forecast isn’t spreading sunshine on the dark cloud over her head. The last thing Parker needs is a mudslide destroying everything she has worked so hard to maintain.
Colin Hudson’s job as a public works supervisor is to protect Parker’s property and neighborhood from further damage. But it’s a little hard when the owner of the land is a control freak who tries to do everything herself. The hardworking, attractive young woman is far from the “hot mess” she claims to be. In fact, her tight grip of control is one of the things that attract him the most. It’s also the hardest to crack. Now Colin’s working overtime to help Parker open up her heart, trust him and let him in.

As Parker and Colin work together to keep her home and neighborhood safe, they may be in for another disaster. Or they may just realize that sometimes it takes destruction to create something new.
My Thoughts…
My Way to You is the story of a young woman, Parker, who went away to college and then got the horrific call to come home, her parents were in an accident.   She puts her life on hold, moves back home to raise her younger sister and brother, and figure out how to keep their lives afloat.    A fire ravaged the area around her house and other environmental issues come to light.  Enter the man, Collin, who is going to keep her house safe and help to keep her community from being washed out.    Of course, the man is hot, single, and interested in Parker.
I love the romance and the family values within the story.    The attraction of Parker and Collin was fun to watch develop.  I was thrilled that Parker stayed true to herself while Collin pushed her just enough to step outside of her comfort zone.    Both Parker and Collin’s families played a large roll in their relationship.    Of course, Parker is the primary caretaker of her brother and sister made her have responsibilities that most women her age do not have yet.   Collin’s family embraced Parker and also kept Collin from moving too fast.
The environmental stuff was not so much fun for me.   I tended to skip over some of the parts where it talked about what the workers were doing to Parker’s yard and how the weather was affecting her community.   Some of that part of the story had to be included so that Collin would keep showing up but some of it was beyond what I needed to know to enjoy the romance.
Catherine Bybee is an author that I read often and I always find myself lost her in books not wanted to put them down.   My Way to You is the first book in the Canyon Creek Series and I am excited to read more. 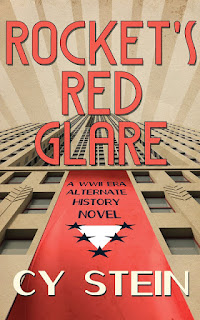 Rocket’s Red Glare is an alternative history novel set in New York City, 1941. FDR is dead and the US is fascist. Charles Lindbergh is president and Joseph P. Kennedy is Treasury Secretary. Fred Trump is Mayor of New York.
Oligarchs and plutocrats have the presidential ear. German American Bundists are rioting while police look away. As WW II officially begins, the British are defeated.

FBI agent Jack Kennedy begins to suspect the Holocaust about the same time he discovers that Lindbergh has a second family in Germany.

Work on the bomb begins as a romance deepens between a mobster’s daughter and a scientist at Los Alamos. The mob and America’s top scientists form The Resistance, working under a mysterious leader whose identity is revealed in the last chapter.
My Thoughts…
I’ve never read an alternate history book before so I was not sure what I was going to read when I picked up Rocket’s Red Glare.    WWII is an era that I am extremely familiar with.   The books set during that era are a must-read for me and I love getting new perspectives.    Rocket’s Red Glare is a what-if story.   What if the US didn’t fight against Hitler?   What if Hitler grew strong and wasn’t defeated?    I liked that there was some history, most of it was twisted up or not quite how I expected.
I enjoyed the storyline, the characters, and twists and turns.   I was lost on some of the political talk but enjoyed seeing how the world could have been different if Lindberg was president and Hitler didn’t get defeated. 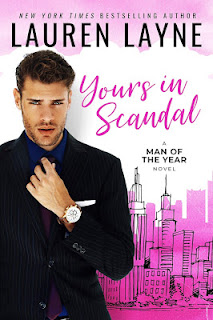 Fresh off being named Citizen magazine’s Man of the Year, New York City’s youngest mayor, Robert Davenport, decides it’s time to strategize. Next move: a bid for the governor’s seat. In his way: an incumbent with a flawless reputation. He also has an Achilles’ heel: an estranged wild-child daughter with a past so scandalous it could be Robert’s ticket to victory. And a charm so irresistible it could be Robert’s downfall.
Rebellion is a thing of the past for Adeline Blake. As New York’s premier event planner, she’s all about reform and respectability. Then she’s approached by Robert to organize the party of the season. Curious, considering he’s her father’s most formidable opponent. And alarming, too. Because Addie can’t help but fall for the righteously popular candidate with the movie-star smile.
Now it’s Robert’s choice. Does he pursue a future that holds his legacy? Or the woman who holds his heart?
My Thoughts…
Man of the Year just happens to be the Mayor of New York who’s term is ending and he is looking to continue in the political world as Governor of the State of New York.   In order to do that he needs to find a way to unseat the current governor and the current governor’s daughter maybe just the way to do that.    A plan is set but little did the Mayor know how enchanting the Governor’s daughter would be.
I loved how Robert went with the plan, but he kept his integrity.   He didn’t go so far as to feel like he was taking advantage of Adeline.   He hired her as a party planner when his usual planner wasn’t available, felt something between them from the very beginning, and then carefully kept inserting himself into her life.    You could tell he wasn’t sure what to do, he wasn’t sure how much or when to tell her that he knew who she was, and he was falling for her.     I liked how careful, how respectful, and how unsure he was of what was going to happen.
Adeline, I understood that she was trying to reinvent herself but her “old” self wasn’t a bad person.   The old self was someone looking for their father’s attention, looking for their father’s love, and was going about getting it in the wrong way.   I loved how she had the support of her friends and didn’t back down when things got tough.   She tried to do the right thing for Robert and herself but the feelings she had for him just wouldn’t let her entirely walk away.
Pick up your own copy of Yours in Scandal.  The book is easy and fun to read. 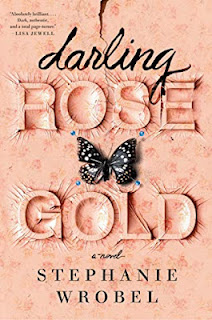 Sharp Objects meets My Lovely Wife in this tightly drawn debut that peels back the layers of the most complicated of mother-daughter relationships...

For the first eighteen years of her life, Rose Gold Watts believed she was seriously ill. She was allergic to everything, used a wheelchair and practically lived at the hospital. Neighbors did all they could, holding fundraisers and offering shoulders to cry on, but no matter how many doctors, tests, or surgeries, no one could figure out what was wrong with Rose Gold.

Turns out her mom, Patty Watts, was just a really good liar.

After serving five years in prison, Patty gets out with nowhere to go and begs her daughter to take her in. The entire community is shocked when Rose Gold says yes.

Patty insists all she wants is to reconcile their differences. She says she's forgiven Rose Gold for turning her in and testifying against her. But Rose Gold knows her mother. Patty Watts always settles a score.

Unfortunately for Patty, Rose Gold is no longer her weak little darling...

And she's waited such a long time for her mother to come home.
My Thoughts…
I’ve heard of people who did this to their children and have always been disgusted by their stories.   Stephanie Wrobel did a lot of research while writing this story about a mother who fakes her child’s illnesses.   The story had a heartbreaking affect on me, while opening my eyes to the strength a child can gain when a mother is held accountable for the things done to the child.
Rose Gold did not know her mother was a bad person when she was growing up, she thought her mother had her best interests at heart because that is what mothers do.  Until the truth comes out and she realizes that all the things she thought was wrong with her were all part of her mother’s sick life.   I hated that a child went through this but enjoyed learning how Rose Gold would continue her life without the one person who has always been there for her.   She got a job, struggled with life, and needed retribution for all that had been done to her.
The retribution was interesting.  I could see that Rose Gold and Patty were both playing games with each other, I was guessing at who the ultimate winner would be and had no clue how it would end.   The twists and turns kept me wondering and turning pages while I prayed that Rose Gold would come out on top.
If you are looking for a book full of twists and turns that will tug at your heart Darling Rose Gold is the book for you.
Posted by A Soccer Mom's Book Blog at 6:00 AM