COVER REVEAL of The Awakening: Book 1 of Valkyrie’s Curse Series by Ellie Mack 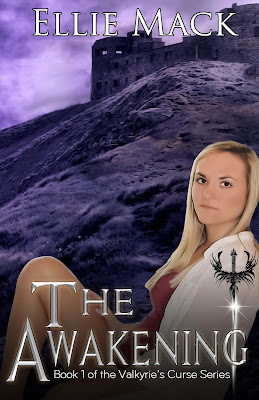 BLURB:
Helena Eskildson is obsessed with Vikings and Norse Mythology. Neither Helena nor her sister knows they are Freya's daughters - Valkyries, the shield maidens to Odin.
When her obsession leads her to a remote site at Roskilde and it's two monolithic rune stones, her destiny is awakened.
While the team wages a battle between a cursed site and a sociopathic killer, time is ticking closer to Ragnarok.
Will her friends be able to save her before the gjallerhorn sounds?

EXCERPT:
He felt he had the favor of the Norns, the three goddesses associated with destiny, that were akin to the Greek gods of fate.
Having the favor of the gods meant success in his goals. He was destined to be Lif, the last man standing, the lone man that would repopulate the earth after Ragnarok. In essence, he would become the new Adam.
The rituals were necessary, an integral part of the process before using the key. Unfolding the linen handkerchief carefully, the ancient bronze key looked nothing like what most would think of as a key. A circular piece, about six inches in diameter spanned from his thumb to the tip of his middle finger. Runic writings along the outside edge written within the form of the great serpent Jormungand, the great dragon conquering the gripping animal grouping in a circular band about two inches wide, the design in the eternal triskell pattern. Inside of that, written in runes was the location of the gjallerhorn. At the center were nine swords pointing to an amber stone, nine strands over an open area, the stone center raised with a square notch in the back. It had to be positioned precisely at the solstice.

Author Bio:
Since leaving the corporate world for the title of MOM, Ellie Mack has pursued her writing dreams. This former columnist is using her sassy opinions to shape her writing in novels. She lives near St. Louis, MO with her husband and two daughters. Ellie is a breast cancer survivor and wants to encourage others who are going through this battle.
When she’s not writing she can be found bullet journaling, crocheting, or cooking. You can find her musings on her blog: https://quotidiandose.wordpress.com

Follow me on BookBub It’s fun and easy, and you’ll never miss out on meeting new authors or having a chance to win great prizes. Here’s the link – https://www.bookbub.com/authors/ellie-mack 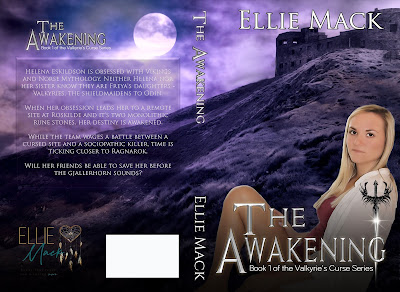