REVIEW & GIVEAWAY of Caught Up in a Cowboy by Jennie Marts 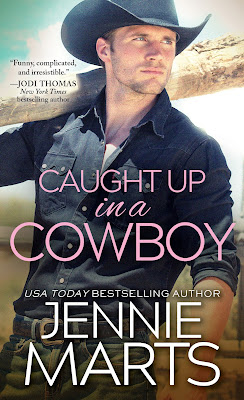 This cowboy plays to win 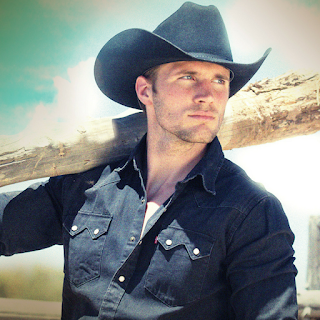 Rockford James was raised as a tried-and-true cowboy in a town crazy about ice hockey. Rock is as hot on the ice as he is on a horse, and the NHL snapped him up. Now, injuries have permanently benched him. Body and pride wounded, he returns to his hometown ranch to find that a lot has changed. The one thing that hasn't? His feelings for high school sweetheart and girl-next-door Quinn Rivers.

Quinn had no choice but to get over Rock after he left. Teenaged and heartbroken, she had a rebound one night stand that ended in single motherhood. Now that Rock's back—and clamoring for a second chance—Quinn will do anything to avoid getting caught up in this oh-so-tempting cowboy…

A mix of a sports story with a cowboy country setting.     Rockford James is a cowboy at heart, having grown up in a little town, on a farm, with a steady girl until his dream of playing professional hockey comes true.     He leaves the little town, the farm, and his steady girl to follow that dream.     Young Rock plans to live the high life and never look back.  What he doesn't plan is to leave his heart back home.

Quinn is that small town girl that loved Rock with all she had until he left her behind.    Wanting to prove she can move on without him she meets a bad boy and has a son.  But she has never let her heart heal from Rock breaking it.   Then he comes back to the little town to heal from an injury.  She steels her heart against him but first loves have a way of breaking through that steel.

This book was so much fun.   It has romance, family drama, and amazing characters.   I love Rock's mom and how she steps in to be Quinn's mom when she needs an ear or advice.    Quinn's dad is a grizzly bear with a tender heart.   The brother's of both Rock and Quinn are so true to how brothers should be.  Rock's egging him on, Quinn's being extra protective.

Caught Up in a Cowboy is the perfect book to fall into.   I definitely recommend picking up your own copy.

Jennie Marts is the USA Today bestselling author of award-winning books filled with love, laughter, and always a happily ever after. She is living her own happily ever after in the mountains of Colorado with her husband, two dogs, and a parakeet that loves to tweet to the oldies. She’s addicted to Diet Coke, adores Cheetos, and believes you can’t have too many books, shoes, or friends. Find her online at jenniemarts.com.


EXCERPT...   He snuck a glance at her as he drove past the barn. Her wavy hair was pulled back in a ponytail, but wisps of it had come loose and fell across her neck in little curls. She looked good—really good. A thick chunk of regret settled in his gut, and he knew letting her go had been the biggest mistake of his life.
It wasn’t the first time he’d thought it. Images of Quinn haunted his dreams, and he often wondered what it would be like now if only he’d brought her with him instead of leaving her behind. If he had her to wave to in the stands at his games or to come home to at night instead of an empty house. But he’d screwed that up, and he felt the remorse every time he returned to Rivers Gulch.
He’d been young and arrogant—thought he had the world by the tail. Scouts had come sniffing around when he was in high school, inflating his head and his own self-importance. And once he started playing in the big leagues, everything about this small town—including Quinn—had just seemed…well…small. Too small for a big shot like him.
He was just a kid—and an idiot. But by the time he’d realized his mistake and come back for her, it was too late.
Hindsight was a mother.
And so was Quinn.
Easing the car up in front of the house, he took in the festive balloons and streamers tied to the railings along the porch. So much of the house looked the same, the long porch that ran the length of the house, the wooden rocking chairs, and the swing hanging from the end.
They’d spent a lot of time on that swing, his arm around her, talking and laughing, as his foot slowly pushed them back and forth.
She opened the car door, but he put a hand on her arm and offered her one of his most charming smiles. “It’s good to see you, Quinn. You look great. Even in a pirate outfit.”
Her eyes widened and she blinked at him, for once not having a sarcastic reply. He watched her throat shift as she swallowed, and he yearned to reach out and run his fingers along her slender neck.
“Well, thanks for the lift.” She turned away and stepped out of the car.
Pushing open his door, he got out and reached for the bicycle, lifting it out of the back seat before she had a chance. He carried it around and set it on the ground in front of her. “I’d like to meet him. You know, Max. If that’s okay.”
“You would?” Her voice was soft, almost hopeful, but still held a note of suspicion. “Why?”
He ran a hand through his hair and let out a sigh. He’d been rehearsing what he was going to say as they drove up to the ranch, but now his mouth had gone dry. The collar of his cotton T-shirt clung to his neck, and he didn’t know what to do with his hands.
Dang—he hadn’t had sweaty palms since he was in high school. He wiped them on his jeans. He was known for his charm and usually had a way with women, but not this woman. This one had him tongue-tied and nervous as a teenager.
He shoved his hands in his pockets. “Listen Quinn, I know I screwed up. I was young and stupid and a damn fool. And I’m sorrier than I could ever say. But I can’t go back and fix it. All I can do is move forward. I miss this place. I miss having you in my life. I’d like to at least be your friend.”
She opened her mouth, and he steeled himself for her to tell him to go jump in the lake. Or worse. But she didn’t. She looked up at him, her eyes searching his face, as if trying to decide if he was serious or not. “Why now? After all these years?”
He shrugged, his gaze drifting as he stared off at the distant green pastures. He’d let this go on too long, let the hurt fester. It was time to make amends—to at least try. He looked back at her, trying to express his sincerity. “Why not? Isn’t it about time?”
She swallowed again and gave a small nod of her head. A tiny flicker of hope lit in his gut as he waited for her response.
He could practically see her thinking—watch the emotions cross her face in the furrow of her brow and the way she chewed on her bottom lip. Oh man, he loved it when she did that—the way she sucked her bottom lip under her front teeth always did crazy things to his insides.
“Okay. We can try being friends.” She gave him a sidelong glance, the hint of a smile tugging at the corner of her mouth. “On one condition.”
Uh oh. Conditions were never good.