REVIEW & GIVEAWAY of Burning Up by Jennifer Blackwood 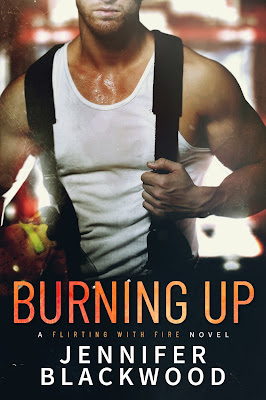 Unemployed schoolteacher Erin Jenkins is back in Portland, the town she hasn’t called home for more than a decade. It’s not the way she wants to spend her last days of summer: in between jobs and avoiding her mother’s snooping by escaping to the ice-cream aisle. But when the opportunity arises for her to accompany her brother’s best friend—her lifetime crush—to a wedding, summer gets a whole lot more interesting.

Firefighter and single dad Jake Bennett has built a nice, safe wall around his heart—no romance, no getting burned. That doesn’t mean he’s ruling out a fling. Considering Erin’s visit is temporary, they’re the perfect fit for a scorching no-strings one-night stand. Or two. Or five. Until the worst thing happens: Erin and Jake are feeling more. Damn that four-letter word.

Now their hearts are on the line, and when their smoldering summer comes to a close, it’s going to be harder than ever to put out the fire.

A new, steamy hot romance series that the first book features a firefighter who is a single dad is just my kind of series.    Of course, there is history, there is family meddling, but the steamy hot romance is what won me over.   While Jake’s heart is guarded due to his daughter’s mother running out on him when she was just a baby.    Then he runs into his best friends little sister, who is so off limits but his heart has other plans.

The instant chemistry between Jake and Erin was perfect.    The hints at the flirting that may have happen during high school was fun.   I love that there was a history between them and they didn’t hide from it.   If anything they embraced it, respected it, and pulled the good from it to make their current relationship ever better.

The secondary characters give the reader a glimpse of potential future storylines and there were a few hints of who may hook-up with whom.   I am excited to read more of Jennifer Blackwood’s book and hopefully catch up with Erin and Jake while learning more about the rest of the Flirting with Fire Family.

Message from Jake Bennett, Hero from Burning Up

Hey, everyone. I’m Jake Bennett. I’m thirty-two and live in Portland, Oregon (Jesus, this sounds like I’m creating a dating profile, which I am definitely not). I’m a firefighter and single parent. Firefighting just came naturally as a career choice. My grandfather was a firefighter. Loved to take me to the station when I was a kid, and I haven’t wanted to do anything else ever since my four-year-old self held a hose. And why would I? I get to help people in need and my day is never boring when I get to spend it with my best buddies. Besides my job, my twelve-year-old daughter Bailey keeps me on my toes. I’ve Googled and YouTubed more than I’d care to admit to keep current on her latest obsessions (seriously, I know way too much about winged eyeliner and HTML coding).

It’s been me and Bailey for over a decade and we’re not looking to add to the family. See, after her mom skipped town on us when she was a baby, I’ve had a tough time trusting people. There are a few people I do trust, which include my firefighter brothers and my best friend’s little sister, Erin Jenkins. She’s back in town for the summer, and after ten years of not seeing her, she’s not the girl next door I remember. She has curves for days, blonde hair I want to sink my fingers into, and a mouth that drives me absolutely mad. She’s off limits and yet somehow, I decided it’d be a good idea to ask her as my date to my sister’s wedding (I claim sleep deprivation and a temporary loss of sanity).

And once we get to the wedding, we’re stuck in the same hotel room together.

Someone upstairs must be tempting me, because Erin is everything that I could ever want in a woman. Smart, sexy, and irresistible. But right now, I need to focus on being a parent. I made a promise to myself and Bailey that she’d be my number one until she went off to college. There’s also the fact that Erin is leaving at the end of the summer. It’d be stupid to contemplate something that already has an expiration date. Right?

Burning Up Excerpt
“Jake, honey, can you get more ice?” Jake’s mom called from down the table.

Without as much as a glance, his chair scratched against the hardwood floor as he backed away from the table. “Sure.”

Erin caught his hand before he could make it past. “Mind if I come, too?” The thought of sitting at the table and making small talk was enough to give her hives. Plus, she’d get this weirdness all out in the open because she wasn’t going to spend all weekend with him if he was going to act like a spooked horse.

Jake looked from the hallway back to the table, clearly debating his strategy. After a few moments, he nodded.

“I think it’s in the storage room over here,” he said. It was to the point where he wasn’t even looking at her now. What the hell had she done?

Before he could disappear into the room, she grabbed his arm again.

He swiveled to face her, his eyes nearly melting her into a puddle of goo. Girl. Get ahold of yourself. It’s just a freaking man. Her body and mind were obviously on different terms. “Yeah?”

“Listen, this is just getting weird. Right? It’s not just me?”

He quirked a brow. “Weird how?”

“Don’t you play it off like it’s all me.” Erin did have a knack for making situations awkward, but there was no way she was the only one experiencing this level of discomfort. She put her hands on her hips. He had to feel this, too. One minute they were laughing like old times, the next, she was subject zero of an infectious disease. “It’s like I have the plague or something.”

“Do you have the plague?” he asked, clearly amused.

“No.” Copious amounts of hand sanitizer ensured that. “But you’re treating me like I do.”

“I’m not treating you like you have the plague.”

He moved closer to her, his scent, a mix of cologne, beer, and mint encasing her. She’d like to say she didn’t inhale it creepily, but she was still Erin Jenkins.

“None of the above.” He swallowed hard, his Adam’s apple climbing his throat.

“Then what is it?” She was at the point she almost wished she hadn’t come. At least then, she could live in her delusional bubble of reminiscing about the way things used to be, when he actually hung out with her.

Perfectly straight teeth raked across his bottom lip. “Being around you just brings back a lot of memories.”

“Hopefully not embarrassing ones.”

“Those are the best kind.”

“I see.” That was not an answer she’d been expecting. Play it cool. Yeah, she was never good at listening to her inner chi.

“Erin, as gorgeous as you are in that unfairly tight dress, you are my best friend’s sister. I work with Reece. I don’t want to lose my kneecaps because of something stupid I’d do.”

“You want to do something stupid?”

He grinned, his eyes lighting up into the dangerous glint he used to have when he was younger and about to do something that he’d absolutely regret. The one that always made Erin’s knees wobble like jelly. “Yes. Insanely stupid.”

His fingers brushed against her cheek, scorching a trail down her jawline.

“Tell me, Erin. Do people still use the word ravish?”

Damn it. So he had heard her earlier. When she thought she’d kept her thoughts in her head—where they belonged. She fought back a cringe and squared her shoulders. She was a grown woman and would own up to it.

“Those who read material other than Firefighters Monthly, yes.”

“A lesser man might be offended.” He took a step forward, and she parroted the move, taking a step back, her back hitting the wall. His arms bracketed her head, caging her in. “Feel free to peruse my science fiction selection anytime you want.”

She rolled her eyes. “If I didn’t know you better, I’d call that for what it is—the worst pickup line in existence.”

“Trust me, Erin, even if I dropped my best pickup line on you, it wouldn’t work.” He closed his eyes and took a steadying breath.

“Is that so?” Little did he know that he could use single-word commands, and she’d be playing her own version of “What Would You Do for a Klondike Bar?” Except instead of ice cream, her prize would be in the form of licking other things.
*** 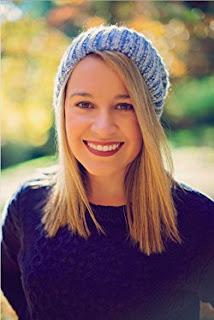 Jennifer Blackwood is the USA Today bestselling author of the Rule Breakers, Drexler University, and Snowpocalypse series. Aside from writing contemporary romance, Blackwood teaches English in Oregon, where she lives with her husband, son, and unruly black Lab puppy. When she isn't writing or teaching, you can find her binge-watching some of her favorite TV shows, such as Supernatural and Gilmore Girls.