REVIEW & GIVEAWAY of HER LAST WORD by Mary Burton 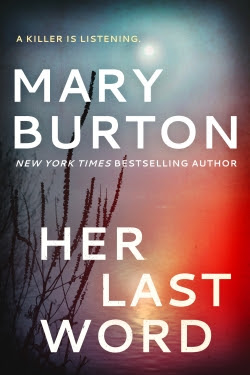 About Her Last Word

Fourteen years ago, Kaitlin Roe was the lone witness to the abduction of her cousin Gina. She still remembers that lonely Virginia road. She can still see the masked stranger and hear Gina’s screams. And she still suffers the guilt of running away in fear and resents being interrogated as a suspect in the immediate aftermath. Now Kaitlin has only one way to assuage the pain and nightmares—by interviewing everyone associated with the unsolved crime for a podcast that could finally bring closure to a case gone cold.

But when a woman Kaitlin questions is later found stabbed to death, she fears that she’s drawn a killer out of hiding. It’s Detective John Adler’s fear that the murders have only just begun. Now his job is to keep Kaitlin safe.

As a bond between Kaitlin and Adler builds, the past closes in just as fast—and it’s darker than Kaitlin remembers. Soon, her wish will come true. She’s going to find out exactly what happened to Gina. Someone has been dying to tell her.

Her Last Word is a book that has a face paced, intense storyline.   The police procedural part tells the story of a cold case that has the potential to tie into a current case.    It was interesting to me to see how Detective John Adler was able to take a case that had been all but forgotten for so many years and use the clues from that story to bring back to life, working to solve it, and working to use the clues to solve past and present murders.

This is a romantic suspense book with twists and turns that I never saw coming.    I loved the different timelines between the present story and Kaitlin's interviews.   Sometimes the storylines didn't come together when going between the two of them as smoothly as I thought they should but that was part of what happen.   The fact that the notes that Kaitlin got did not always match what the police were finding out.   The romance part of the story was minimal and I liked that it was not at the front of the storyline.  That allowed me to focus on the murders and try to figure out who dun-it.    I will say I never guessed correctly. 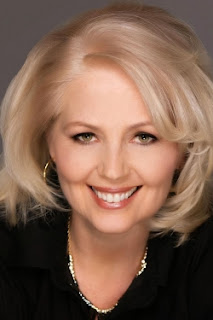 New York Times and USA Today bestselling novelist Mary Burton is the popular author of thirty-three romance and suspense novels, as well as five novellas. She currently lives in Virginia with her husband and three miniature dachshunds. Visit her at www.maryburton.com.

My latest Romantic Suspense, HER LAST WORD is set in my hometown of Richmond, Virginia and features homicide detective John Adler, university teacher Kaitlin Roe and, not to be forgotten, a vengeful killer. HER LAST WORD has its roots in Kaitlin Roe’s obsession to solve the cold case of her missing cousin, Gina Mason, who vanished fourteen years ago. They were walking along the deserted road that snakes along the James River. Both were drunk. When a man attacked them, Kaitlin got away. By the time she found help, Gina was gone.

I’ve done quite bit of research over the years on police procedure and have attended events such as Sisters in Crime’s Forensic University, Writers Police Academy and my local citizen police academies. I’ve interviewed detectives and I have a library of books that cover everything from true crime stories, courtroom procedures to forensic evidence collection. Having a basic understanding of police procedure was a great jumping off point for this novel.

But with this story, I wanted to dig a little deeper, so I started listening to crime podcasts. Initially, I was searching for new police procedural twists and turns. I especially liked listening to podcasts featuring cops describing investigative techniques and their take on the criminals they hunted. As I listened, I found myself writing backstory scenes as if they were for a podcast. I found the style crisp and fun, and I was enamored with the idea of building the plot around a podcast.

As much as I enjoy this storytelling technique, I knew I couldn’t ignore my main protagonists. Let’s face it. We keep turning the pages to learn what’s happening to characters we care about. In this case, I knew the focus had to stay on Kaitlin and John. Plus, I love pairing opposites and those two fit that bill immediately. Both come from very different backgrounds, and it would be easy to assume they’d never be right for each other. But if you dig past John’s affluent background and Kaitlin’s less stable upbringing, you find two people who each carry a deep sense of guilt. It’s the losses they suffered that have changed them both, making them far more similar than anyone would imagine. The two are drawn to each other at the first spark of sexual tension. Both soon discover the other is honorable and values friends and family above everything, including personal safety.

And of course, I can’t forget the villain, the character I consider the most important in any suspense novel. Without the villain, there’d be no story. To me, one of the most entertaining bad guys I’ve ever written is in HER LAST WORD. He’s got a quirky sense of humor that under normal circumstances might be charming. His quips and jokes about cold blooded murder are hard to forget. Though I balanced several points of view in the book, slipping into the skin of one of my most chilling villains yet was fascinating and fun.

HER LAST WORD is not only told in a podcast style of writing, but it weaves together suspense with romance with a cast of characters that are truly some of my favorite.

Kaitlin had not revisited the spot by the river since she left Richmond fourteen years ago. Returning now was harder than she’d imagined. Her chest tightened and her hands trembled as she stood on the narrow road hugging the river just under Mrs. Hayward’s house.

The afternoon sun cast a warm glow on the rippling water lazily drifting past large rocks. The warmth of the sun took the edge off the cold and blustery air as she walked toward the outcropping of boulders that would be packed with sunbathers in only a few months. It looked so peaceful. So innocent.

She closed her eyes. The soothing sounds of nature grew silent in the wake of Gina’s screams. Her cries. And when she opened her eyes, for a brief second, she saw the menacing clown mask.

Every fiber in her demanded she run now.

Her fingers curled into fists.

Breathless, she retraced the same path she had walked with Gina. She hugged the shoulder of the narrow road, remembering as an occasional car came flying by full of kids not paying attention. With each step, she felt the pull of the past.

Kaitlin was now a half mile from Pony Pasture and standing at the spot. Her heart pounded as fragmented memories rushed her from all sides.

The knife to Gina’s throat and then her ear. Gina’s screams. The blood. The seconds when she didn’t remember but must have stood in shock and utter denial that this could be happening. A memory of those missing moments reached out and teased her, but it quickly drifted away. Why couldn’t she remember?

A car drove by, and she sidestepped into a line of trees separating the river from the road. To steady herself on the sloping bank, she placed her hand on one of the trees. Its broken branch scratched her palm, and in an instant a memory emerged.

It was Gina’s abductor. “I told you I’d come for you, Gina.”

She closed her eyes and replayed the words that until now had remained locked in her subconscious. She focused, trying to trigger more memories. She waited. Listened. But instead, the sounds of the river and wind in the trees came back.

Praise for Mary Burton
“This romantic thriller is tense, sexy, and pleasingly complex." —Publishers Weekly on The Shark
“With a solid plot, heightened tension, steady pacing and a cleverly written villain, Burton’s expertise at crafting suspense shines bright in this novel." —RT Book Reviews on The Hangman
"[Burton] balances the romance and the suspense perfectly, making her books just what I’m looking for when I’m in the mood for something both romantic and suspenseful." —All About Romance on The Dollmaker