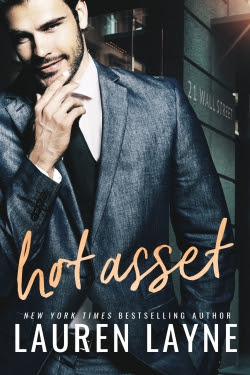 Ian Bradley is the definition of a Wall Street hotshot: seven-figure salary, designer suits, and a corner office. His drive of the floor is just as potent. Every woman who knows him has felt the rush. But now he’s met his match in Lara McKenzie—a woman with the power to bring Ian to his knees.

An ambitious, whip-smart daughter of FBI agents, Lara is a rising star in fighting white-collar crime. Her latest case—the investigation of Ian Bradley for insider trading—could make her career. She knows a scoundrel when she sees one. Ian fits the bill: a cocky, ridiculously handsome bad boy with a slick swagger. 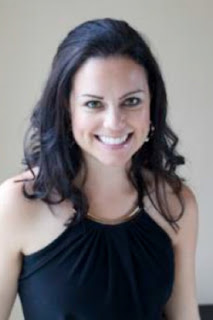 Lauren Layne, a former e-commerce and web marketing manager, moved from Seattle to New York City in 2011 to pursue a full-time writing career. Her first book was published in the summer of 2013, and since then, she’s written more than two dozen romantic comedies, hitting the New York Times, USA Today, iBooks, and Amazon bestseller lists. She currently lives in New York City with her husband.

Whip smart with the looks of a Greek god and lots of money thanks to his hard work -- what’s not to love? Ian, the hero of my newest release HOT ASSET, has been a bachelor for a long time in the NYC dating scene, but he’s met his match with Lara McKenzie. But even though she is in his life to scrutinize his career, that doesn’t stop him from taking his best shot at seducing the buttoned-up investigator for the SEC.

So what are Ian’s top ways to woo a woman and how well do they work on Lara? Let us see:

(1) Never underestimate the power of the pickup line … until it bombs.

Ian’s the master of the pickup line; so smooth, that women don’t even know it is a pick-up line. Until Lara. He crashes and burns with everything he says in their first meeting.

(2) Flattery will get you everywhere. Usually.

Ian’s the type of guy who always knows exactly what to say to even the most skeptical of women to make her blush a little. Not so much with Lara McKenzie! She literally has no use for pretty compliments. She already knows she’s got it going on where it counts—her brains.

(3) An unexpected gesture will get you everywhere … until it doesn’t.

Ian knows the power in the element of surprise, a gift or gesture when the woman’s least expecting it. Except Lara is always expecting it. And thus, decidedly less than impressed.

(4) Keep her far away from your baggage. Unless, of course, her job is to bust your baggage wide open.

Ian knows his best chance to score is keeping a woman’s attention on the here-and-now, since his past is more than a little messy. Unfortunately for him, Lara has zero interest in his present, and every interest in his past … which holds the key to destroying his future!

(5) A little Black Am-Ex card never hurts … unless she thinks you made your money illegally.

Ian Bradley knows that being filthy rich works in his favor when it comes to women. He can afford the best restaurants, the fanciest champagne. Meanwhile, Lara would like nothing more than to prove he made every last hard-earned penny illegally ...

I’m pulling my stapler out of my box of office crap when there’s a knock at the conference room door.


I glance up, lifting my eyebrows in surprise when I see the last person I’d expect leaning against the doorway.

I click my stapler twice and study him, trying to figure out his game. His expression’s friendly, but his blue eyes are calculating.

He grins. “Would you like to put that stapler down?”

The moment I do, he steps forward and, setting one of the drinks on the table, slides it toward me with a flick of the wrist. If anyone else did this, the drink would tip and fall, but Ian simply makes the cup slide perfectly across the table and into my waiting hand.

I lift the Starbucks cup and study it. “Really. Bribery?”

“Ah yes, your assistant,” I say, leaping on the opening. I’d met Kate Henley yesterday, and my initial impression of the tiny brunette was that she has one of the best poker faces I’ve ever seen.

Verdict after trying to coax her into conversation today?

The best poker face I’ve ever seen. “She said she’s worked for you for five years,” I say.

“Mm.” He walks toward the window, looks down. “They gave you the bad conference room. The other ones have a better view.”

“No, you’re here because of J-Conn,” he says, turning back around.

It’s a predictable play, fishing for information. Granted, he’s right. I’m here for J-Conn, and I’m not all that surprised Wolfe’s already put that at the top of their guesses.

But this isn’t my first rodeo.

I say nothing, instead watching him carefully for any signs of nervousness, finding none.

“Why now?” he asks quietly. “Why are you guys after me for a company that crashed ten months ago?”

“Didn’t say that we were.” He’ll find out he’s right the second I start asking questions, but that’s not today. And I have no intention of playing this game on his terms.

Not that this is a game.

But the way he’s watching me, and the Starbucks drinks . . . I can tell he thinks it’s one.

“Okay, well let’s say hypothetically you’re here because of J-Conn,” Ian says smoothly. “What would have to happen to put me on your radar?”

I set the cup aside without taking a drink. “Hypothetically, we’d have a source,” I say, telling him nothing he doesn’t already know. “Who’s alleged you had insider knowledge of the company’s future.”

I snort. “Really. You bring me an overpriced coffee and think I’ll just tell all?”

“Or you could swoon,” he says with a wink.

This time I roll my eyes. “I’d heard you were a womanizer, but I confess, it’s really hard to picture.”

“Yeah?” He crosses his arms and sits on the edge of the conference room table. “What have you heard? Maybe that I’m good with my hands? That when I’m with a woman, I always make sure she gets her—”

Good Lord, is it hot in here? I resist the urge to undo a button on my shirt.

He smirks, then glances down at my ignored beverage. “Try the drink, Ms. McKenzie.”

“No thanks,” I say briskly, trying to remind myself that I’m Lara McKenzie with the SEC, not Lara McKenzie, Ian Bradley groupie.

He gives an exasperated sigh as though I’m an uncooperative child and stands and walks toward me. He stops a couple of feet away and, without breaking eye contact, picks up the drink I’ve set aside and holds it out. “Try it.”

“This caveman approach might work on other women, but—”

“Oh, I get it,” he interrupts, starting to set aside the drink. “You’re scared. You like your lines straight, your colors black and white, your coffee boring. God forbid you try something new, live a little—”

Before I can stop myself, I reach out and snatch the drink. My fingers brush his, and the contact is so unexpectedly electric I nearly drop the damn thing.

He shifts slightly closer. Not to crowd, or to intimidate, or to kiss, but for a whisper-quiet seduction that’s about a million times more effective than his pickup lines so far.

Well, hell, I realize with a jolt. The man really may be as good as his reputation after all.

I stay put, giving a little lean of my own, letting my eyes lock on his as I part my lips and put the green straw in my mouth. I take a sip of the cold, wonderfully sweet beverage, and I let out an mmm noise unlike anything I’ve ever made in my life.

His eyes flare with surprise, then desire, and for a long moment I have no idea who’s seducing whom, who’s one-upping the other . . .

Ian gives a slow smile that crinkles his eyes.

“Back at you, Mr. Bradley.” I take a victory sip—it really is delicious. “You want to play sexy cat and mouse, I can play right back, and I’ll win.”

''Layne can always be counted on to create an engaging, steamy and thoroughly rewarding reading experience.'' —RT Book Reviews on Cuff Me

“This bold contemporary serves up quick-witted banter, [and] a hint of suspense…” —Publishers Weekly on Steal Me

“[I Knew You Were Trouble] has the office drama, the incredibly real and vibrant characters, and enough snark and fun to keep you up late into the night finishing the story.” —Hypable