Review for A Special Place for Women by Laura Hankin

A Special Place for Women by Laura Hankin

It's a club like no other. Only the most important women receive an invitation. But one daring young reporter is about to infiltrate this female-run secret society, whose beguiling members are caught up in a dark and treacherous business.

For years, rumors have swirled about an exclusive, women-only social club where the elite tastemakers of NYC meet. People in the know whisper all sorts of claims: Membership dues cost $1,000 a month. Last time Rihanna was in town, she stopped by and got her aura read. The women even handpicked the city's first female mayor. But no one knows for sure.

That is, until journalist Jillian Beckley decides she's going to break into the club. With her career in freefall, Jillian needs a juicy scoop, and she has a personal interest in bringing these women down. But the deeper she gets into this new world--where billionaire "girlbosses" mingle with the astrology-obsessed--the more Jillian learns that bad things happen to those who dare to question the club's motives or giggle at its outlandish rituals.

The select group of women who populate the club may be far more powerful than she ever imagined.

And far more dangerous too.

My Thoughts… READ THIS BOOK!   I loved everything about this story.   The fun New York setting, the crazy women who think they could rule the world, and the amazing writer who was just looking for a story to get her back on track.

Jillian has had a rough go lately and is looking for a way back into the writing world.   Her in is joining a private club of women who think they are in charge.   These women have money and power, and Jillian has neither of those but somehow, she does what she sets out to do.  She joins this club to write a tell all and learns so much more than what she expected.

The relationship of Jillian and her best friend had me hoping for what was to come.  I loved how much they had each other’s backs and did what they had to help them succeed in their dreams.  A friendship that stands through the years is one that is special and Jillian is lucky to have that person.

Just over halfway into the book a twist was thrown, and it was perfect.   I stopped for just a second to think about what was happening and then dug right back into the story and never put it back down.   As I finish the book, I am still thinking about it. 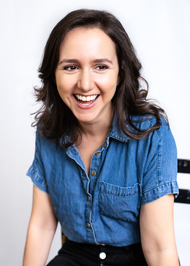 Meet Laura Hankin…Laura Hankin is the author of HAPPY & YOU KNOW IT and the upcoming A SPECIAL PLACE FOR WOMEN. She's written for outlets like McSweeney's and HuffPost, while her musical comedy has been featured in The New York Times, The Washington Post, and more. She splits her time between New York, where she has performed off-Broadway and on onscreen, and Washington, DC, where she once fell off a treadmill twice in one day.