Review of THE AUDACITY OF SARA GRAYSON By Joani Elliott

THE AUDACITY OF SARA GRAYSON By Joani Elliott

Joani Elliott’s humorous contemporary fiction debut, THE AUDACITY OF SARA GRAYSON (Post Hill Press, May 25, 2021), brilliantly follows an insecure writer’s journey of self-discovery as she struggles to fill the void left behind by her mother—a best-selling literary icon. 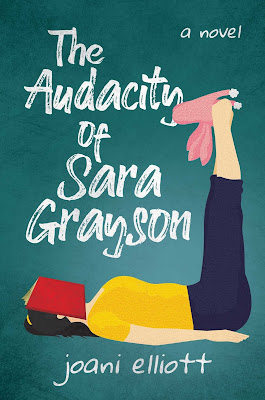 What happens when the world’s greatest literary icon dies before she finishes the final book in her best-selling series?

And what happens when she leaves that book in the hands of her unstable, neurotic daughter, who swears she’s not a writer?

Sara Grayson is a 32-year-old, part-time greeting card writer about to land the toughest writing assignment of her life. Three weeks after the death of her mother, a world-famous suspense novelist, Sara learns that her mother’s dying wish is for her to write the final book in her wildly popular Ellery Dawson series.

Sara has lived alone with her dog, Gatsby, ever since her husband walked out with their Pro Double Waffle Maker and her last shred of confidence. She can’t fathom writing a book for 30 million fans—not when last week’s big win was resetting the microwave clock.

But in a bold move that surprises even herself, Sara takes it on. Against an impossible deadline and a publisher intent on sabotaging her every move, Sara discovers that stepping into her mother’s shoes means stumbling on family secrets she was never meant to find—secrets that threaten her mother’s legacy—and the very book she’s trying to create.

My Thoughts… I was looking for a fun book.  I thought how cool that a mother would not finish a book and leave it to her non-published daughter to finish. To me that says I have faith in you.    I did not expect Sara to be so full of self-pity.  Everything was against her, she was sure everyone was out to see her fail, and she had no faith in herself.   The people around her for the most part did what they could to build her up and push her to succeed but ultimately it was Sara’s responsibility to buckle down and write the book.

The Audacity of Sara Grayson is a nice and quick book.   I wanted to read it and found myself not wanting to put it down.  I did not really love any characters and the story was predictable and cheesy at times.   But as a usual more historical fiction reader it was a fun rom-com to break up the heavier reading.    I would give it 3.5 stars and would recommend it to someone looking for a fun book.

Add to your MUST-READ book on Goodreads

JOANI ELLIOTT believes in the magic of stories, a good cup of tea, and the power of living a creative life. She has taught writing at the University of Maryland and Brigham Young University. For more on Joani Elliott visit joanielliott.com.