Review for The Invisible Husband of Frick Island by Colleen Oakley

The Invisible Husband of Frick Island by  Colleen Oakley 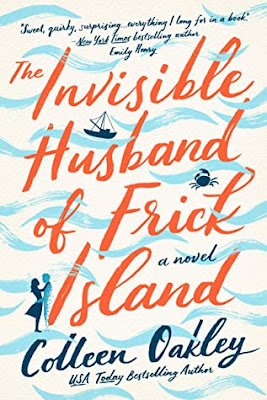 Sometimes all you need is one person to really see you.

Piper Parrish's life on Frick Island—a tiny, remote town smack in the middle of the Chesapeake Bay—is nearly perfect. Well, aside from one pesky detail: Her darling husband, Tom, is dead. When Tom's crab boat capsized and his body wasn't recovered, Piper, rocked to the core, did a most peculiar thing: carried on as if her husband was not only still alive, but right there beside her, cooking him breakfast, walking him to the docks each morning, meeting him for their standard Friday night dinner date at the One-Eyed Crab. And what were the townspeople to do but go along with their beloved widowed Piper?

Anders Caldwell’s career is not going well. A young ambitious journalist, he’d rather hoped he’d be a national award-winning podcaster by now, rather than writing fluff pieces for a small town newspaper. But when he gets an assignment to travel to the remote Frick Island and cover their boring annual Cake Walk fundraiser, he stumbles upon a much more fascinating tale: an entire town pretending to see and interact with a man who does not actually exist. Determined it’s the career-making story he’s been needing for his podcast, Anders returns to the island to begin covert research and spend more time with the enigmatic Piper—but he has no idea out of all the lives he’s about to upend, it’s his that will change the most.

My Thoughts… As I read this book, I thought of a real island in the Midwest that has no cars and a slower way of life, but it depends almost entirely on the vacationers to keep their island going.   I was picturing the quaint stores, the wonderful restaurants, and the citizens that do not always love having people intrude on their lives.

Ander’s starts podcasting about Frick Island and their resident widow, Piper.   I liked how he started telling her story and then realized that her story may not be what he thinks it is.   He wants to get to know her and know why she still thinks her husband is alive.   I loved how the other citizens put him through the paces to protect Piper.   They realized that outsiders would find her odd and did what they could to protect her.

Piper… what a wonderful character.   I cannot give it away but the end of her story WOW!  I loved how she lived her life, she was a caretaker for others, she allowed others to caretake her, and she lived a life that helped her be happy.   Her quirks, her spunk, and her amazing will to keep living show her strength.

Meet Colleen Oakley…Colleen Oakley is the USA Today bestselling author of You Were There Too, Close Enough to Touch, Before I Go, and the forthcoming The Invisible Husband of Frick Island (May 2021). Colleen’s novels have been longlisted for the Southern Book Prize twice and Close Enough to Touch won the French Reader’s Prize. Her books have been translated into 21 languages, optioned for film and have received numerous accolades including:

*Us Weekly “Must” Pick

*In Touch Weekly: Grade A