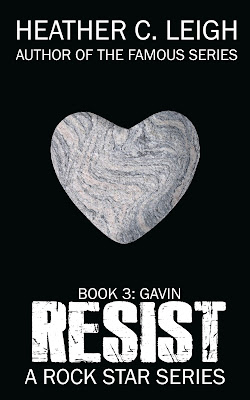 All Gavin Walker, bass player for the multi-platinum selling band, Sphere of Irony, wants to do is surf, play music, and occasionally get laid. The problem is that Gavin has a stalker. A potentially deadly one. The threats he receives always mention something about Gavin being gay, which isn't public knowledge since the record label wants to keep it quiet.

Mitch Hale used to track serial killers for the FBI. A live-changing incident led him to quit the bureau and start his own company providing computerized security for Los Angeles' wealthiest people. Mitch doesn't know anyone when he moves across the country from D.C. to California, and all he has for companionship is a pathetic string of failed relationships with women.

When Gavin's manager hires Mitch to find the stalker, the men instantly hate each other. Despite the constant fighting, attraction between the two blazes hot, confusing the former FBI agent. Spending time with Gavin forces Mitch reflect on what he's denied about himself for the last ten years. Listening to Mitch's plan to catch a madman thrusts Gavin's personal life out in the open for the entire world to see.

Can Gavin and Mitch stop fighting long enough to stop a stalker before someone gets hurt? Or will they stubbornly resist the feelings that develop when they're forced to work together?

There is not much I love more than hot, sexy alpha males.    The entire Sphere of Irony series is full of such men.    So it is no surprise to me that I love this series so far.

Gavin, the bass player in the band, has been hiding his true self from the public and when he finally comes out I was amazed at how smoothly it went.   I mean people criticized, people asked questions, but Gavin is able to finally just be.     Even with all the drama around him, the band, and his stalker he could be himself.  No more pretending, faking, or hiding behind closed doors.    I realize that this is not the main storyline, but it is what hit me.

The sparks flew instantly when Mitch walked in the door.    After that first meeting the reader has to know that things are going to get interesting between the two of them.   The fact that Gavin knows who he is but Mitch is still in denial just adds to the story.   The day dreaming the two of them do about each other was just as hot as their actual relationship.  My favorite part of their relationship was the fighting and then the respect that follows their fights.   They both showed their tempers, but when they settled down to think they realized where the other was coming from.

Heather C. Leigh is amazing.   She handles tough situations, both the gay aspect and the stalker aspect, with respect and writes a perfect story.    If you are looking for hot, steamy love along with a mystery of who is stalking Gavin this is the book for you.    I recommend this entire series but this can be read as a standalone.

** Thanks Heather C. Leigh for providing me with a copy of Resist.***

Check out my other posts about Heather C. Leigh and her amazing book.


As of December 1, 2009, According to The Federal Trade Commission (FTC),  product reviewers on blogs must disclose whether they received products for free or received payment for their review.
The books I review on this site ( A Soccer Mom's Book Blog) are sent to us by publishers, authors or downloaded from Netgalley. This is a very common practice.  I never take payments for these reviews and all the reviews on this site are our own thoughts and feelings and are not influenced.
Posted by A Soccer Mom's Book Blog at 5:00 AM