A Colorful Life: Drawn in Broken Crayon by Melissa Storm 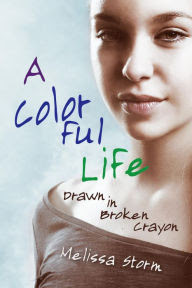 A handsome stranger.
A whirlwind trip to India.
A life forever changed.

For Daly English, life is a series of one disappointment after another. Rather than dealing with the fall-out, she locks herself in her studio and works tirelessly toward completing her art school portfolio. Unfortunately, fate isn't done with Daly quite yet.

Time and time again, a handsome stranger refuses to be ignored, forcing her to come to grips with the loss she's been harboring for years and to trust herself to love again. Their whirlwind romance transports her from the drab Midwest straight to the bold and colorful capitol city of India where a slew of quirky characters cast a stark contrast to her world at home. Will Daly continue to fade into the background of her own life, or will her journey transform her into exactly who she needs to be?

A Colorful Life Drawn in Broken Crayon weaves a tale of friendship, ambition, and adventure while illustrating that sometimes what we want the least is what we need the most.

I started A Colorful Life and wondered what I was getting into.   Would I be able to connect with the characters?    I felt like it started out with a little disconnect but within the first few chapters the dots started connecting for me.    I could see where this book was heading, or at least where I hoped it was heading.

There are quite a few tough subjects covered within the pages.    The death of a father to a daughter at a young age was the first and then the mother/wife leaves the daughter to figure out how to deal with the loss on her own.     Next comes the trouble relationship between the mother and daughter due to the lack of communication.    Just to keep things interesting add in a pregnant teenager whose parents are not supporting her and the father of the baby refuses to take responsibility.    And if you think that is enough, you are not quite right.    There is also the loss of a husband.    I know it sounds like a lot and it is, but it all ties together.   The story lines weave together perfectly, the characters support each other as needed, and everything ends up as it should.     I enjoyed that the story lines were not just here is what is happening and here is the ending.   It took to the end of the book for these characters to settle into their lives.

Melissa Storm wrote a book that had me unable to stop reading.   I was invested in what happen to the characters.   I knew what I wanted to happen and was excited to see if they would follow the path that I wanted.

I recommend checking out A Colorful Life.

**Thank  you Melissa Storm for providing a copy for me to review.**
Posted by A Soccer Mom's Book Blog at 5:00 AM