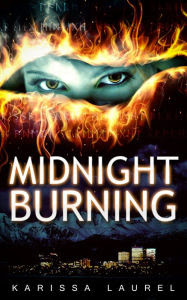 Solina Mundy lives a quiet life, running the family bakery in her small North Carolina hometown. But one night, she suffers a vivid nightmare in which a wolfish beast is devouring her twin brother, who lives in Alaska. The next morning, police notify her that Mani is dead. Driven to learn the truth, Solina heads for the Land of the Midnight Sun. Once there, she begins to suspect Mani’s friends know more about his death than they’ve let on. Skyla, an ex-Marine, is the only one willing to help her.

As Solina and Skyla delve into the mystery surrounding Mani’s death, Solina is stunned to learn that her own life is tied to Mani’s friends, his death, and the fate of the entire world. If she can’t learn to control her newfound gifts and keep her friends safe, a long-lost dominion over mortals will rise again, and everything she knows will fall into darkness.

Midnight Burning is a look at mythology, which I know very little about.    My lack of knowledge did not hinder my understanding of the story.    Karissa Laurel did a great job explaining the Gods and how the rankings went without making it boring.   She gave just enough information for the unknowing reader to get enough understanding to follow the rest of the story.     I ended the book thinking that I definitely need to check out more mythological books.

I have to be careful while writing this review as I really want to give away more than I should thus possibly giving away spoilers, I will be careful so please keep reading.    Solina is not a complicated woman, at least in the beginning.   She lives at home, works with her family in their bakery, and does not travel.   When her twin brother ends up murdered in Alaska everything changes for her.     She cannot put his death behind her; she has to know what actually happen to him.    As she learns more about what happened to her brother, she comes into herself.  She finds her true talents, finds friends, and finds out about a world that she never knew thought was real.

Midnight Burning is part of a series.   This is the first one and definitely worth checking out.    It does not end abruptly, but does leave unanswered questions.   I will hope that Karissa Laurel does not keep us waiting long for more.