Q&A with Val Brelinski, author of THE GIRL WHO SLEPT WITH GOD 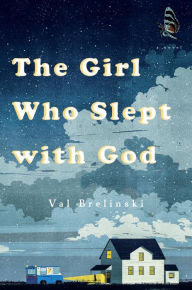 Set in Arco, Idaho, in 1970, THE GIRL WHO SLEPT WITH GOD tells the story of three sisters: moral-minded Grace, gregarious and strong-willed Jory, and young Frances. Their father, Oren, is a respected member of the community and science professor at the local college. Yet their mother’s depression and Grace’s religious fervor threaten the seemingly perfect family, whose world is upended when Grace returns from a missionary trip to Mexico and discovers she’s pregnant with—she believes—the child of God.

Distraught, Oren sends Jory and Grace to an isolated home at the edge of the town. There, they prepare for the much-awaited arrival of the baby while building a makeshift family that includes an elderly eccentric neighbor and a tattooed social outcast who drives an ice cream truck.
Book Links
Amazon | Barnes and Noble | Goodreads

ADVANCE PRAISE FOR THE GIRL WHO SLEPT WITH GOD
“Val Brelinski manages to make a foreign world utterly familiar with prose that’s heartfelt, provocative, and wistful. A striking debut.”
—Kaui Hart Hemmings, author of The Descendants
“The Girl Who Slept With God is a lushly detailed and immensely compelling portrait of adolescence, Idaho, sisterhood, the 1970s, and the painful, precious mystery of family. Any reader who has ever sought to love someone beyond her understanding will relish this lovely book.”
—Eleanor Henderson, author of Ten Thousand Saints
“The Girl Who Slept with God is a deeply moving and beautiful novel that challenges our notions about faith, family and community. Val Brelinski is a gorgeous writer—compassionate and spare, generous and insightful—and this novel will stay with me for a long time. I loved it.”
—Molly Antopol, author of The UnAmericans
“What is it about the stark snows and broiling summers of Idaho that make an evangelical life seem both so compelling and so alien? Brelinski’s gorgeously textured debut novel reveals the love and the pain of growing up in a community at war with the worldly, and thus the world. Inventive and dynamic, The Girl Who Slept With God put me constantly in mind of Housekeeping, but rubbed roughly against life as we live it, with drugs and high school and “A Whiter Shade of Pale.” The questions in these pages are, above all, moral ones: what can we do when our duty toward our God-fearing family contradicts our duty toward God? And what if both those duties contradict our duty toward ourselves? Twinning grace and humor with startling psychological depth, Brelinski’s debut novel is bold, sometimes unnerving, and chock full of the moments, insights, and beauty we read for.”
—Scott Hutchins, author of A Working Theory of Love
“The Girl Who Slept With God is a gorgeously harrowing examination of a family facing perils so great everything they know about faith and love is challenged. Val Brelinski is a writer of uncommon precision and empathy, and this novel makes for a brilliant and commanding debut.”
—Laura van den Berg, author of The Isle of Youth and Find Me