Meet Me in Abeline: A Cupid's Bow Short Story by Melissa Storm 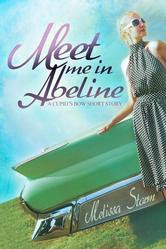 James Morgan never really believed in love. That is, until he laid eyes on Deborah Walker at the local soda fountain. He surprises himself by inviting her out for an impromptu night on the town, and she shocks him even more by agreeing. As the night progresses, the two share their past histories and secret dreams, and James realizes that she is the perfect woman for him. The only problem is that he ships off to Korea the next morning. Fulfilling his duty is non-negotiable to James, even if fighting for his country will ultimately break both of their hearts.

Deborah promises to wait for him, but two years is a long time to put her life on hold, especially for a man she only knew for one day. When Rip Rockwell returns from the war and James does not, Rip proposes marriage to Deborah. She agrees and they build a beautiful life together until his death fifty years later. Through it all, though, she can never quite forget her first love. She retires to Abeline, expecting to live out the rest of her days in peace. So imagine her surprise when James Morgan moves in next door…

Is it ever too late to give love a second chance? James and Deborah are about to find out.

Meet Me in Abeline is maybe the shortest novella I have ever read.   It was quick, fun, and to the point.  Yet, it had a story.   In just a few pages I was able to care about James and Deborah.   I was invested in what was happening.    Most importantly I needed them to be okay.   The story did not go as I expected.   Most war time stories go with the guy going to war, the woman waiting for them to return.   That was not quite, but kind of, how this went.    Read the book and check it out.

Melissa Storm is a newer author to me.   I have devoured quite a few of her books in the last couple months and know that whether it is a full fledge novel or a wonderful novella I will be entertained from the very beginning to the very end.     I certainly recommend checking out all of her books, including this one Meet Me in Abeline.
Book Links
Amazon   |   Kobo   |   iTunes   |   Barnes and Noble   |   Goodreads


As of December 1, 2009, According to The Federal Trade Commission (FTC),  product reviewers on blogs must disclose whether they received products for free or received payment for their review.
The books I review on this site ( A Soccer Mom's Book Blog) are sent to us by publishers, authors or downloaded from Netgalley. .This is a very common practice.  I never take payments for these reviews and all the reviews on this site are our own thoughts and feelings and are not influenced