A Second Chance (The Publicist Book 4) by Christina George 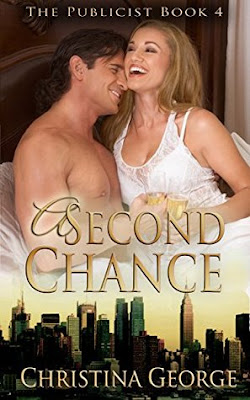 Mac Ellis is never down for long but this time is proving to be a little more challenging. It’s been almost two years since he and Kate split up and Mac’s still wrestling with the guilt of breaking her heart.

Mac Ellis is a legend both in and out of the bedroom and when an amazing opportunity comes his way to head up a publishing company, Mac grabs it and restarts his career. As luck would have it, he and Kate wind up vying for the same title: A book that promises to be the biggest book of the year, maybe of a career.

Smart, sexy, and beautiful Sydney Montgomery is a top CIA operative. Some at the agency call her a savant, but the world, if they knew, would call her Wonder Women, because she brought down what could have been one of the biggest terrorist threats the country would have ever seen. Now Sydney is telling her story and Mac wants to publish her book, but Sydney has a secret and when Mac meets her, he realizes she is not at all what he expected.

Because love the second time around is always sweeter...

A Second Chance is exactly what Mac needs and deserves.   This is his story.   Mac Ellis has gotten a lot of what he deserved.   In his defense he was dealt a raw deal when his daughter dies shortly after her birth and his marriage starts to fall apart.     His past has caught up with him in this book.   He gets a book deal, meets the author, and has the feeling that he knows her.  As he continues to work with her he realizes that he really does know her.  He knows her very well.   The author is his first love.

The Publicist series is one of my favorite.  I have read all four book, listened to the first two, and am always anxious for the next to be released.    While I have loved the series, A Second Chance closes out the series for me.  I am good with letting it go.   Everyone has found their happy place in their lives.    When Christina asked me if I was #TeamNick or #TeamMac I was always #TeamMac.    I hated his life choices, but needed him to be settled.

Christina George has done a great job with the entire series.   I cannot imagine how hard it is to keep writing after you thought you were done with a set of characters.    She has done a perfect job tying this story up.  Ending it with a peak into everyone’s lives, showing how everyone has settled down and is living life.

I definitely recommend checking out this series.