Spotlight for From Ashes to Song by Hilary Hauck

From Ashes to Song  by
Hilary Hauck 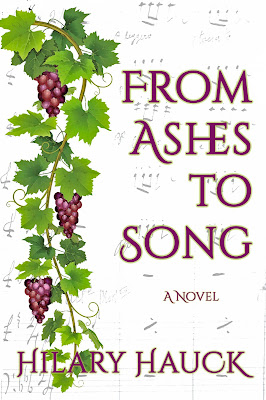 Italy, 1911. Pietro's life on the family vineyard is idyllic. He has at last captured the melody of the grape harvest on his clarinet and can't wait to share his composition with his grandfather, but before he can play, news arrives of a deadly disease sweeping the countryside. They have no choice but to burn the vineyard to stop its spread. The loss is too much for Pietro's grandfather, and by morning Pietro has lost two of the most precious things in his life-his grandfather and the vineyard. All he has left is his music, but a disastrous performance at his grandfather's funeral suggests that music, too, is now beyond his reach.

Excerpt From Ashes to Song

Assunta had reconciled her heart to the fact that Nandy had married another woman in America. Mary, her name was. She’d even borne his child—may they both rest in peace. She would not remain bitter about it. He’d been far from home, alone, and he’d already paid the worst price by losing them both

What she was having a harder time accepting was how he’d let Beatrice dig her seductive claws into him when he had returned to Italy.

“I would have come straight to you,” he’d said. “But I was too embarrassed. I didn’t know how to tell you about Mary.”

They could put this all behind them soon. By the end of the day, she and Nandy would be married as they’d intended eight years earlier, and they would travel a world away from the clutches of Beatrice.

Assunta’s wedding dress was an elegant yellow, not bright like a sunflower, more like a rose that grew on a balcony overlooking the piazza in Verona.

Mamma had surprised her with the fabric the same day Nandy had shown up to propose. “Pretty, isn’t it?” she’d asked. “I came across it at the market one time when your father was still alive. It’s been tucked hidden away all this time.”

Mamma had spent the ensuing weeks industriously planning and incessantly cleaning, appearing wholly confident that Assunta’s life had always meant to take this direction, despite Papà’s decree. Mamma even had the style of Assunta’s dress decided, and being so sure of her plan, she had very nearly forgotten to take Assunta to the dressmakers with her.

“You always look out for me,” Assunta had told her. “I don’t know what I’ll do without you.”

“You’ll do just fine, that’s how you’ll do” Mamma had taken the fabric from the dressmaker’s hands and adjusted the folds. “Wider pleats, this wide, all the way down the front to the hem.”

Assunta would be eternally grateful to her mother, but for all the love in the world—and she’d never break her mother’s heart by telling her this—it was high time she started to make decisions for herself.

She planned to start small. She might decide to have morning coffee before making the beds and sweeping the floor. It’d be up to her whether they had pasta or rice or minestra on what day of the week. And to think, no more mornings spent kneading the dough to make gnocchi for her brother, Vito, to sell in his shop. Perhaps she’d make them to sell elsewhere, and if she did, it would not be when and how her brother decided. She’d make sure her gnocchi looked as good as they tasted, and she wouldn’t use the plain tubs her brother used. She’d choose wooden or copper bowls, oval like the gnocchi themselves, and worthy in their own right of being on show.

She’d sell her homemade tagliatelle, and once a week, she’d make pasta al forno and serve it hot mid-morning, none of which Vito had agreed to do. Then again, she barely made a lira on the work she did for him, so it was probably just as well.

Yes, this marriage and the journey ahead of them was the launch of a new and everlasting chapter, one where she would run the home, care for her husband, for their children. The final piece of the puzzle that was this life.

“Here, they’re real silk,” Mamma held up a garland of white flowers. “To pin to your veil. They can’t blemish. That’s my wish for you, a marriage with no blemish.”

Mamma’s intention might have been to ward off troubles. Still, the only blemish—the enormous blemish that everyone had so far avoided talking about these past weeks would be the wife and the girlfriend Nandy had had since he’d first proposed to Assunta.

“I couldn’t be happier.” Even to Assunta, her words sounded forced. “With the flowers, I mean, not—” Not what? His women? She wouldn’t say that out loud.

“Crying shame, your father, not being here.” Mamma had either taken Assunta’s hesitation as a moment of sorrow or was deliberately redirecting the subject.

Assunta resisted the urge to set her straight and point out that if Papà had been here, she wouldn’t be marrying Nandy at all, but there was little point opening that old wound today.

Despite her intention, Assunta spent the entire walk to church thinking about how, if Papà had let them marry eight years ago, Nandy would never have ended up with another wife and girlfriend in the first place. And following on from that thought, she reminded herself that she had forgiven him, and therefore those two women had no business being on her mind today. And yet they were.

Vito was waiting for them outside the church door, looking dashing though a little uncomfortable in a silk topper.

“Papà would have been proud to walk you down the aisle,” Mamma said.

“He wouldn’t be walking me to Nandy, though, would he?” Assunta said without thinking. There, she’d blown it. “Sorry,” she murmured.

If Mamma reacted to the paltry apology, Assunta didn’t see because her brother pulled her in for a swift kiss on both cheeks.

“You look beautiful.” Vito let go of Assunta just in time for her to glimpse Mamma pressing her handkerchief to her nose with uncharacteristic drama and disappear into the church.

Assunta lifted her veil, careful not to dislodge the silk flowers.

“I can’t see around corners, but as he’s the groom, I would presume so.

Another thing I can’t see around the corner is your future. It bothers me.”
“I can tell you the future—we’re getting married, and we’re going to live happily ever after.” Vito had chosen a fine time to cast his doubts. Well, if everyone intended to focus on what would hinder rather than nurture this marriage, she might as well not hold back. “Did Beatrice show up? Is she in there?”

“She wouldn’t dare, and you shouldn’t think of her. Not today, not ever again. As for your future, I have no doubt you’ll make a perfect home and a happy husband. It’s where you’re going that worries us all.”

America had always been the worry. Papà hadn’t doubted Nandy’s character so much as his destination. “We’re not the first to go. Besides, Nandy can provide well for us in America.”

Far from helping, her brother’s sudden change in tone and certainty unsettled her. Now she felt uncertain again. She should send Vito inside the church, have him explain that she needed a bit more time to think about this marriage, not pulling out necessarily, just needing a bit of time alone. But knowing her brother, he would do it his way. He’d call out their other siblings, Mamma too, and make everyone else wait in the pews while they decided her fate as a family.

No, she’d got herself into this. Nandy couldn’t be blamed for straying; he’d been a free man. Now Assunta needed to focus on how this was her time, and Nandy had always been the right man for her.

The organist switched to play the Wedding March. Assunta did not move. “Our home will be joyous with the sound of children,” she told Vito.
“We are supposed to walk, not talk when the music starts,” Vito said. Assunta felt the tug of his arm on hers but held still. This was meant to be.

It was time to take her place at Nandy’s side, the conclusion of a long path to a fulfilled adulthood.

“You want to leave?” Vito asked.

She didn’t look up to see if Nandy was there, nor to either side and into the faces of the congregation.

At the top of the aisle, she kept her eyes firmly on the stone floor. If Mamma was crying, Assunta would cry, too. If Mamma were stoic, Assunta would cry anyway because Mamma would be putting a brave face on the fact that this marriage meant a ticket to a life a world away.

She saw Nandy’s feet first. They were big. She should have checked them.

She was grateful for the veil that hid her smile at the memory of just a few months ago after Nandy had turned back up, but before he drummed up the courage to speak to her, Assunta had asked Mamma to find her another man to marry. One who hadn’t returned from his world travels, a widower to boot, and proceeded to walk out with another—Beatrice of all people—with not so much as a courtesy call to Assunta. She’d specified that the new version of husband Mamma was to find should not have smelly feet, nor a brood of ready-made children like the man her aunt had married.

Assunta kept her eyes down as Vito kissed her cheek. She clung tighter to his arm, but he pulled her fingers away from his sleeve. There was a moment of shuffling and silence, then Assunta let her brother go.

She knelt next to Nandy, and without greeting or welcome, the priest began his ritual. Someone in the congregation coughed, Assunta stiffened. Was this someone clearing their throat to speak, to call out that she couldn’t, after all, have him? Nobody spoke. The priest carried on.

Someone sneezed. A sneeze didn’t mean the start of an objection, but still, it made Assunta want to turn and look. She wouldn’t put it past Beatrice to show up. Or for someone else to say it was all a big mistake, that he was still married, that his other wife had not died after all. Assunta clasped her hands tight through the liturgies and rites, her white gloves bunching around the fingers. Then the priest asked if anyone knew any reason why the two people standing before him should not be joined in holy matrimony—Assunta was surely going to choke—but the priest was talking again. Did that mean nobody had spoken? He was talking about man and wife—they were truly married.

She turned to look at Nandy for the first time today. Kneeling, they were equal height, the extra few inches he had on her must be in the length of his legs. His profile was important, his brown-black mustache freshly oiled, chin jutting forward slightly, clearly focused on the solemnity of the service. If she thought hard enough, perhaps she could make him turn and look at her, but he kept his gaze firmly on the altar. He was taking this so seriously, reverent in the face of their future—a comforting sign.

They stood up and were permitted to kiss. At last, Nandy turned, his eyes like something that would melt solid bronze. He took her in his arms, turned her, and bent her backward so she’d have toppled to the ground if he hadn’t held her so tightly, and he kissed her like there was nobody watching.