Review for Letters Across the Sea by Genevieve Graham

Letters Across the Sea by  Genevieve Graham 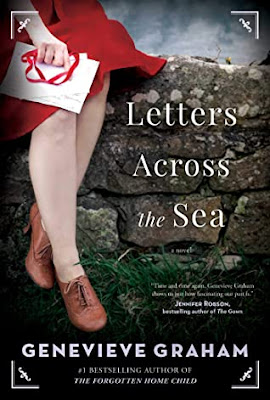 From Goodreads:  Inspired by a little-known chapter of World War II history, a young Protestant girl and her Jewish neighbour are caught up in the terrible wave of hate sweeping the globe on the eve of war in this powerful love story that’s perfect for fans of The Guernsey Literary and Potato Peel Pie Society.

If you’re reading this letter, that means I’m dead. I had obviously hoped to see you again, to explain in person, but fate had other plans.

At eighteen years old, Molly Ryan dreams of becoming a journalist, but instead she spends her days working any job she can to help her family through the Depression crippling her city. The one bright spot in her life is watching baseball with her best friend, Hannah Dreyfus, and sneaking glances at Hannah’s handsome older brother, Max.

But as the summer unfolds, more and more of Hitler’s hateful ideas cross the sea and “Swastika Clubs” and “No Jews Allowed” signs spring up around Toronto, a city already simmering with mass unemployment, protests, and unrest. When tensions between the Irish and Jewish communities erupt in a riot one smouldering day in August, Molly and Max are caught in the middle, with devastating consequences for both their families.

Six years later, the Depression has eased and Molly is a reporter at her local paper. But a new war is on the horizon, putting everyone she cares about most in peril. As letters trickle in from overseas, Molly is forced to confront what happened all those years ago, but is it too late to make things right?

From the desperate streets of Toronto to the embattled shores of Hong Kong, Letters Across the Sea is a poignant novel about the enduring power of love to cross dangerous divides even in the darkest of times—from the #1 bestselling author of The Forgotten Home Child

My Thoughts…I never even thought about WWII and Canada.   I knew nothing for their WWII history but now I am intrigued.   I want to learn more, read more, and meet more amazing people from history.

The divide between Jews and other races was not something I really thought about happening in North America.   I thought of that as a Europe thing, but in Canada the divide led to protests, riots, loss of friends, and distrust in communities.   I could feel the pain and fear that Molly and Max felt as their friends took sides, fights broke out, and a community was divided.  Even with all the WWII books I have read, I struggle with the idea that a choice of religion is a reason not to like someone.  Yet, this is entirely what the late 30’s early 40’s was about, all over the world.

Genevieve Graham told the story of what Max, his friends, and Molly’s brothers saw after enlisting in careful detail that brought the battlefields to life.    The horror, the injuries, and the loss of lives were unthinkable, yet these brave heroes did what they had to just to keep alive.  I liked that those who came home were able to tell their stories.

Letters Across the Sea is an amazing story giving an unique look at a time when everyone had an opinion and the world was at war.  I recommend picking up your own copy.