Review for The Secret Stealers by Jane Healey

The Secret Stealers by  Jane Healey 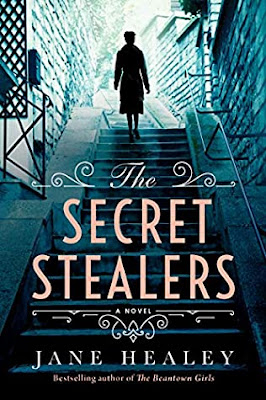 A female American spy in Nazi-occupied France finds purpose behind enemy lines in a novel of unparalleled danger, love, and daring by the Amazon Charts bestselling author of The Beantown Girls.

Anna Cavanaugh is a restless young widow and brilliant French teacher at a private school in Washington, DC. Everything changes when she’s recruited into the Office of Strategic Services by family friend and legendary WWI hero Major General William Donovan.

Donovan has faith in her—and in all his “glorious amateurs” who are becoming Anna’s fast friends: Maggie, Anna’s down-to-earth mentor; Irene, who’s struggling to find support from her husband for her clandestine life; and Julia, a cheerful OSS liaison. But the more Anna learns about the organization’s secret missions, the more she longs to be stationed abroad. Then comes the opportunity: go undercover as a spy in the French Resistance to help steal critical intelligence that could ultimately turn the tide of the war.

Dispatched behind enemy lines and in constant danger, Anna is filled with adrenaline, passion, and fear. She’s driven to make a difference—for her country and for herself. Whatever the risk, she’s willing to take it to help liberate France from the shadows of occupation and to free herself from the shadows of her former life.

My Thoughts…A young woman feels the need to do more than teach privileged students French at a private school.   When the opportunity comes, she jumps in with both feet.   There is no hesitation, just a need to do more.  Immediately, I knew that she would have a bigger part in the WWII war efforts.   She would do amazing things, see things I would never want to, and have experiences that terrify me.   Most of all I knew she would be a hero.   I was not disappointed with her story, her life, her drive at all.

The story of the OSS sending women right into war zones because women are questioned less due to men expecting less of them is not a new story, but Jane Healey told it in a new way to me.   I loved how detailed the story was.   I could picture the places that Anna was sent, hear the voices of the people she met, and feel her fear as she went places that many were trying to escape.    The story came alive as I read word after word unable to put the book down.

Whether you are a professional WWII reader (my favorite genre) or new to the genre this book will bring the war alive to you.   You will meet brave and amazing characters.  Learn wonderful and horrific things about what happen to people and places during the war.  Most of all you will be transported to a time and place that I am lucky to not have lived in but love to learn so much about.

**Thank you Ann-Marie Nieves at Get Red PR for a copy of the book via NetGalley in exchange for my honest thoughts.

Meet Jane Healey...  When my daughters were born, I left a career in high tech to become a freelance writer. My passion for historical fiction became my new career when my first novel THE SATURDAY EVENING GIRLS CLUB was published in 2017. With the release of THE BEANTOWN GIRLS in 2019, I continued to fulfill my dream of writing lesser known stories of women in history.

I live outside of Boston with my two teen daughters, two idiotic cats and one amazing husband. I like reading, running, cooking, going to the beach and drinking lots of coffee.

My upcoming novel THE SECRET STEALERS is based on the true stories of the women of the Office of Strategic Services, the precursor to the CIA, during World War II. It will be released in March 2021.