Review for Courage, My Love by Kristin Beck

Courage, My Love by  Kristin Beck 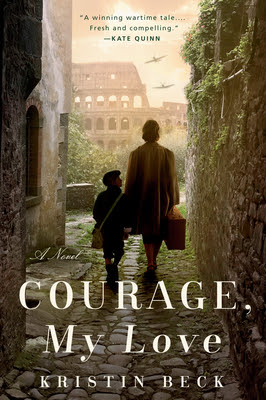 When the Nazi occupation of Rome begins, two courageous young women are plunged deep into the Italian Resistance to fight for their freedom in this captivating debut novel.

Lucia Colombo has had her doubts about fascism for years, but as a single mother in an increasingly unstable country, politics are for other people--she needs to focus on keeping herself and her son alive. Then the Italian government falls and the German occupation begins, and suddenly, Lucia finds that complacency is no longer an option.

Francesca Gallo has always been aware of injustice and suffering. A polio survivor who lost her father when he was arrested for his anti-fascist politics, she came to Rome with her fiancé to start a new life. But when the Germans invade and her fiancé is taken by the Nazis, Francesca decides she has only one option: to fight back.

As Lucia and Francesca are pulled deeper into the struggle against the Nazi occupation, both women learn to resist alongside the partisans to drive the Germans from Rome. But as winter sets in, the occupation tightens its grip on the city, and the resistance is in constant danger.

In the darkest days, Francesca and Lucia face their pasts, find the courage to love, and maintain hope for a future that is finally free.

My Thoughts…No one can ever say that WWII, or any war, is anything but horrific.   The ways that people are forced to live, the lives lost, and the countries destroyed are nothing less that horrific.   But out of these wars come some amazing friendships.   In Courage, My Love I chose to focus on the friendship of Lucia and Francesca.    They are two strong, fearless women who work together with the resistance to fight the Germans.    As the war moves on their losses add up and their strength grows.   The Allies are coming, and they must be ready.

The research that Kristin Beck put into this book had to be immense.   She took a time in life when people were living in fear of being captured or killed and brought it to life.  I could picture the ghetto as the soldiers rounded up the people living there.   The sounds of artillery being fired and planes flying over headed were sounds that I heard as I read her book.    I could see the Resistance hiding, running down alleys, and doing their dangerous work all while trying to keep themselves alive.  Courage, My Love is a book that came alive to me as I read it.

I love WWII and learning about that era.   Kristin Beck did a wonderful job in telling a story while teaching her reader the history of the time.  I recommend Courage, My Love to any WWII readers, historical fiction readers, or those interested in losing themselves in a wonderful story of friendship and strength. 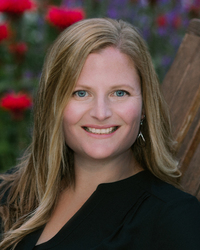 Meet Kristin Beck… Kristin Beck first learned about World War II from her grandmother, who served as a Canadian army nurse, fell in love with an American soldier in Belgium, and married him shortly after VE Day. Kristin thus grew up hearing stories about the war, and has been captivated by the often unsung roles of women in history ever since. A former teacher, she holds a Bachelor of Arts in English from the University of Washington and a Master’s in Teaching from Western Washington University. Kristin lives in the Pacific Northwest with her husband and children.
Posted by A Soccer Mom's Book Blog at 6:00 AM