Spotlight for The Darkest Glare by Chip Jacobs 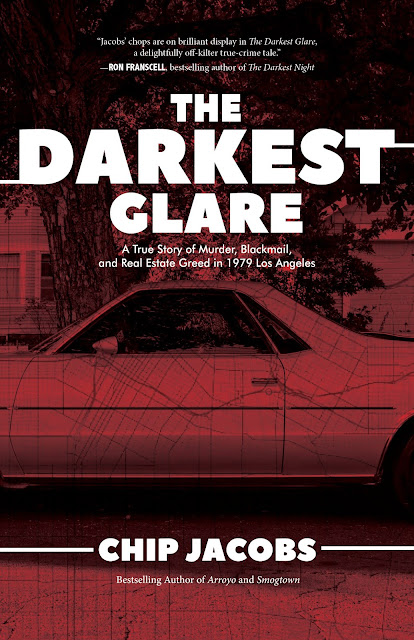 In 1979 the City of Angels had its fair share of devils. Howard Garrett was one of them. His contractor's license bought him an entrée into a Space Matters, a real estate development company run out of a hip mansion on the edge of LA's Miracle Mile district. The company's owners, debonair, slick-talking Richard Kasparov and self-conscious, nerdy Jerry Schneiderman, were L.A.'s Young Turks of interior architecture. When Richard interviewed the quiet, buzzard-faced Howard, he figured he'd found the perfect supervisor to oversee construction for a firm hungry to expand. What neither he nor his partner Jerry knew was that by hiring Howard, they'd unloosed a monster into their midst. In The Darkest Glare: A True Story of Murder, Blackmail and Real Estate Greed in 1979 Los Angeles (Rare Bird Books; ISBN 978-1644281918; on sale March 9, 2021; $18.00), author and journalist Chip Jacobs recounts a spectacular, noir true-crime saga from one of the most murderous times in American history. It's 1979 and future NBA stars Magic Johnson and Larry Bird are meeting on the court for the first time, Laverne & Shirley is the most watched show on TV, and the Los Angeles murder rate is the highest in recorded history. Even before Howard Garrett entered Richard and Jerry's lives, he had managed to slither away from a series of brutal crimes unprosecuted. But if Howard was the violent one of the trio, Richard was its resident grifter. As the firm expanded, Richard figured out ways to bleed the company dry for his own gain, including by hitting up Howard to put up his credit line in service of the company. When Richard's grift is exposed, Jerry cuts all ties to him while a - by now - enraged Howard loses everything. Using his steel blue El Camino to stalk his victims and X-ray glower to intimidate everyone, Howard unleashes his blood thirsty vengeance and decides to create a murder-for-hire corporation employing a motley crew of junkies and bottom-scrapers. The first targets: the owners of Space Matters.But Howard's band of would be assassins bungled through his scheme time and again in scenes more reminiscent of The Three Stooges than The Godfather. It took almost a dozen tries to kill the first Space Matters partner, Richard. Jerry - the surviving partner and unlikely hero of the story - blackmailed and threatened, finds himself in an odyssey of disguises, getting not-so-legal, legal advice from his lawyer while surreptitiously meeting in a graveyard, seeking protection from a charismatic, ex-Israeli mercenary, and being used as bait in a LAPD-orchestrated showdown at the La Brea Tar Pits.  Whether its stumblebum killers or a mass murder averted by a kid watching Laverne & Shirley, you'll never read about bloodlust like this. Or see Southern California the same way. Chip Jacobs conducted hundreds of hours of interviews and reviewed thousands of pages in Howard Garrett's case to connect the dots. The resulting book is a feast for true crime lovers as well as for lovers of Los Angeles noir. The Darkest Glare is vintage true crime at its finest.As a bonus, The Darkest Glare includes an original true crime short also by Chip Jacobs, "Paul & Chuck". "Paul & Chuck" is the truly terrifying and weird story of crusading Los Angeles attorney Paul Morantz who in the late 1970s went to battle against one of the most dangerous and violent cults America has ever seen: Synanon. It's story that's guaranteed to make your skin crawl!
Add to your MUST-READ list on Goodreads
Purchase your own copy on Amazon or Barnes and Noble
About the Author: 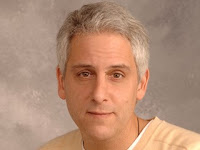 Chip Jacobs is an author and journalist. His fiction debut, Arroyo, about two parallel lives gravitating around Pasadena, California's Colorado Street Bridge, was a Los Angeles Times bestseller. His other books include the biography Strange As It Seems: the Impossible Life of Gordon Zahler, and the bestselling Smogtown: the Lung-Burning History of Pollution, and its sequel about China, The People's Republic of Chemicals, the latter two with William J. Kelly. His reporting has appeared in the Los Angeles Times, the Los Angeles Daily News, The New York Times, LA Weekly, CNN, and the Pasadena Weekly, among others. Jacobs, a graduate of the University of Southern California, is the recipient of numerous writing awards. He is at work on his follow up novel, and several non-fiction projects.
Posted by A Soccer Mom's Book Blog at 6:00 PM