Review for An Unexpected Peril by Deanna Raybourn

An Unexpected Peril by Deanna Raybourn 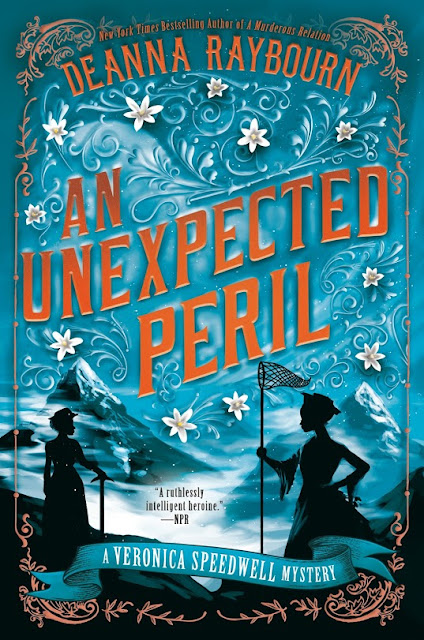 From Goodreads…A princess is missing, and a peace treaty is on the verge of collapse in this new Veronica Speedwell adventure from the New York Times bestselling and Edgar Award-nominated author Deanna Raybourn.

January 1889. As the newest member of the Curiosity Club—an elite society of brilliant, intrepid women—Veronica Speedwell is excited to put her many skills to good use. As she assembles a memorial exhibition for pioneering mountain climber Alice Baker-Greene, Veronica discovers evidence that the recent death was not a tragic climbing accident but murder. Veronica and her natural historian beau, Stoker, tell the patron of the exhibit, Princess Gisela of Alpenwald, of their findings. With Europe on the verge of war, Gisela's chancellor, Count von Rechstein, does not want to make waves—and before Veronica and Stoker can figure out their next move, the princess disappears.

Having noted Veronica's resemblance to the princess, von Rechstein begs her to pose as Gisela for the sake of the peace treaty that brought the princess to England. Veronica reluctantly agrees to the scheme. She and Stoker must work together to keep the treaty intact while navigating unwelcome advances, assassination attempts, and Veronica's own family—the royalty who has never claimed her.

My Thoughts… An Unexpected Peril is the sixth book in the Veronica Speedwell series.   I am entirely hooked on this series.  In each book Stoker and Veronica get pulled into a new mystery and adventure.   They reconnect with past characters but also meet new and interesting characters.   I love trying to put the pieces together as they solve crimes, work through mysteries, and still find time to build their relationship.

This book tells the story of Princess Gisela and her village of Alpenwald.   The area is known for their mountain climbing and when a climber dies it is realized that it was not accidental.   Of course, Veronica cannot leave it at that.   She must find out who would want her dead.   Things never go exactly as planned for Stoker and Veronica but somehow they always solve their case, meet interesting people, and get tangled up in unique circumstances.

**Thank you Tara O’Connor at Berkley for a copy of the book via NetGalley in exchange for my honest review.

Meet Deanna Raybourn…New York Times and USA Today bestselling novelist Deanna Raybourn is a 6th-generation native Texan. She graduated with a double major in English and history from the University of Texas at San Antonio. Married to her college sweetheart and the mother of one, Raybourn makes her home in Virginia. Her novels have been nominated for numerous awards including two RT Reviewers’ Choice awards, the Agatha, two Dilys Winns, a Last Laugh, three du Mauriers, and most recently the 2019 Edgar Award for Best Novel. She launched a new Victorian mystery series with the 2015 release of A CURIOUS BEGINNING, featuring intrepid butterfly-hunter and amateur sleuth, Veronica Speedwell. Veronica returned in 2017's A Perilous Undertaking, and A Treacherous Curse, 2018. A Dangerous Collaboration was released in 2019, and book five, A Murderous Relation, was a March 2020 release. An Unexpected Peril, Veronica's sixth adventure, will be published in March 2021. In addition to further Veronica books, Deanna is writing a contemporary novel about four female assassins on the cusp of retirement.
Posted by A Soccer Mom's Book Blog at 6:00 AM