Review for Off the Wild Coast of Brittany by Juliet Blackwell

Off the Wild Coast of Brittany by  Juliet Blackwell 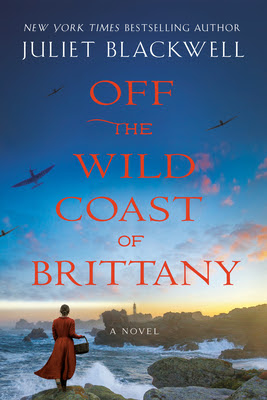 Natalie Morgen made a name for herself with a memoir about overcoming her harsh childhood after finding a new life in Paris. After falling in love with a classically trained chef, they moved together to his ancestral home, a tiny fishing village off the coast of Brittany.

But then Francois-Xavier breaks things off with her without warning, leaving her flat broke and in the middle of renovating the guesthouse they planned to open for business. Natalie's already struggling when her sister, Alex, shows up unannounced. The sisters form an unlikely partnership to save the guesthouse, reluctantly admitting their secrets to each other as they begin to heal the scars of their shared past.

But the property harbors hidden stories of its own. During World War II, every man of fighting age on the island fled to England to join the Free French forces. The women and children were left on their own...until three hundred German troops took up residence, living side-by-side with the French women on the tiny island for the next several years.

When Natalie and Alex unearth an old cookbook in a hidden cupboard, they find handwritten recipes that reveal old secrets. With the help of locals, the Morgen sisters begin to unravel the relationship between Violette, a young islander whose family ran the guesthouse during WWII, and Rainier, a German military customs official with a devastating secret of his own.

My Thoughts…A house on an island has brought the mystery of who lived there during WWII together with the present day.   As Natalie and her sister, Alex, work to remodel a house they find many hidden treasures and turn to the island’s residents to decipher them.  As Natalie and Alex work towards their future, solve some of the mysteries of the past, they must also come to understand what their own histories mean for themselves and be able to accept it.

Juliet Blackwell tells a story that pulled me in, kept me reading, and had me invested in Natalie, Alex and Violette.   I love the flashbacks to WWII just as much as I love the sisterhood between Alex and Natalie.   Their stories intertwine and come together perfectly telling a beautiful and enchanting story of family, friendship, and acceptance. 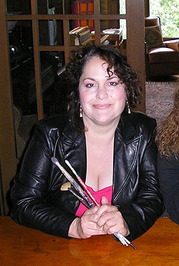 Meet Juliet Blackwell…Juliet Blackwell was born and raised in the San Francisco Bay Area, the youngest child of a jet pilot from New York and an editor from Texas. She graduated with a degree in Latin American Studies from University of California, Santa Cruz, and went on to earn Masters degrees in Anthropology and Social Work from the State University of New York, Albany.

While in graduate school she published several articles based on her research with immigrant families from Mexico and Viet Nam, as well as one full-length translation: Miguel León-Portilla's seminal work, Endangered Cultures. Juliet taught Medical Anthropology at SUNY-Albany, was producer for a BBC documentary about Vietnamese children left behind by US soldiers, and worked as an elementary school social worker in rural New York. Upon her return to California she became a professional artist and ran her own decorative painting, historical renovation, and domestic design studio for more than a decade.

In addition to mainstream novels, Juliet pens the New York Times Bestselling Witchcraft Mysteries and the Haunted Home Renovation series. As Hailey Lind she wrote the Agatha Award-nominated Art Lover's Mystery series. She is past president of Northern California Sisters in Crime and former board member of Mystery Writers of America.