Review for Eternal by Lisa Scottoline 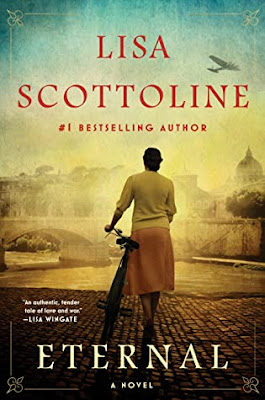 Over the course of her stellar and prolific career, #1 bestselling author Lisa Scottoline has sold over 30 million copies of her page-turning thrillers and beloved humorous essays.  Her novels have always explored themes of family, justice, and love and her masterpiece, ETERNAL (G.P. Putnam’s Sons; On Sale: March 23, 2021), is the culmination of a  lifetime of work: a  sweeping historical epic fueled by devastating true events. Named for Rome, the Eternal City, this moving novel lifted from the pages of history is the book that Scottoline was born to write. It  will be forever etched in the hearts and minds of readers, as will the powerful truth it asserts—what war destroys, only love can heal.

Set in Rome during the ventennio, the twenty years of Mussolini’s rise and fall, ETERNAL centers on Elisabetta, Marco, and Sandro, who grew up as the best of friends despite their differences. Elisabetta is a feisty beauty who dreams of becoming a novelist; Marco, a brash and athletic son in a family of professional cyclists; and Sandro, a Jewish mathematics prodigy, kindhearted and thoughtful, the son of a  lawyer and a  doctor. Their friendship blossoms to love, with both Sandro and Marco hoping to win Elisabetta's heart.

Now, their relationships are changing—as is the world around them. In the autumn of 1937, Mussolini asserts his power, aligning Italy's Fascists with Hitler's Nazis and changing the very laws that govern Rome.  As anti-Semitism takes legal root and World War II erupts, Sandro suddenly can’t finish his studies and Marco, who takes pride in his work at the local Fascist office and hopes to rise in the party, realizes that these laws are destroying his best friend, but isn’t sure where his loyalty lies. Elisabetta, abandoned by one parent and orphaned by the other, tries to make ends meet as her country crumbles around her.  The Nazis invade and occupy Rome, perpetrating new atrocities against the city's Jews, culminating in a final, horrific betrayal. Against this backdrop, the intertwined fates of Elisabetta, Marco, Sandro, and their families will be decided.

Unfolding over decades, ETERNAL is a  saga of loyalty and loss, family and food, love and hate—all set in one of the world's most beautiful cities at its darkest moment. Scottoline has been researching the Italian Holocaust since her undergraduate days when she took an intimate year-long seminar at the University of Pennsylvania taught by the late Philip Roth called “The Literature of the Holocaust,” studying the work of Primo Levi, among others.  Following that course, she knew that someday she’d write about these events.  Her background as an Italian-American, a lawyer, and an adjunct professor at the University of Pennsylvania Law School fueled her interest in the subject. After she conducted decades of research, including numerous trips to Italy, ETERNAL was born.

My Thoughts…I have been a fan of Lisa Scottoline for a long time.   With this jump into historical fiction, she has cemented herself one of my all-time favorite authors.   This is my favorite of hers so far.   World War II is such an amazing time.   The strength of the people who lived during, the horrors they had to endure, and the lives they came out living all have me in awe.   Lisa Scottoline tells the story of young love, best friends, and surviving all while bring history alive.   I devoured this book.

The setting of Rome was brought alive by Lisa’s words.   I could picture the ghetto that Sandro was forced to live in, the office building that Marco worked, and the restaurant that Elisabetta worked in.   The characters came alive as I learned about their lives and saw all that they were willing to do for each other during a time when just staying alive was hard enough.  I became invested in their well being and their happiness.

Everything about this book is phenomenal.   I love when an author steps out of their normal genres and hits a homerun writing in a new genre.   Lisa Scottoline did exactly that.

**Thank you Sydney Cohen at Penguin Random House for a NetGalley copy of the book in exchange for my honest review. 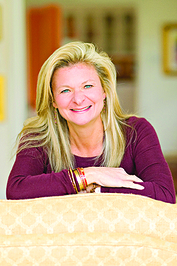 ABOUT THE AUTHOR… Lisa Scottoline is the #1 bestselling and Edgar Award–winning author of thirty-three novels. She has over thirty million copies of her books in print in the United States and has been published in thirty-five countries. Scottoline also writes a weekly column with her daughter, Francesca Serritella, for the Philadelphia Inquirer, which have been adapted into a series of memoirs. She has served as President of the Mystery Writers of America and has taught a course she developed, “Justice in Fiction,” at the University of Pennsylvania Law School, her alma mater. She lives in the Philadelphia area.  Visit:www.scottoline.com

A CONVERSATION WITH LISA SCOTTOLINE

Why did you write Eternal, and why now?

I have wanted to write this novel ever since my college days as an English major at the University of Pennsylvania, where I took a year-long seminar taught by the late Philip Roth. One semester was “The Literature of the Holocaust.”  He introduced us to the books of Primo Levi, an Italian Jewish chemist deported to Auschwitz during World War II, but survived to write the heartbreaking memoir If This Is a Man, published here as Survival in Auschwitz.  Mr. Roth thought Levi was one of the most talented writers the world has ever produced and that the Italian Holocaust wasn’t well-enough known, world-wide. When I  learned of a  singular horror that took place in the Jewish Ghetto of Rome in October, 1943, I  knew I had a  story that needed to be told.

How is ETERNAL like or unlike your previous novels?

Everything I ’ve ever written, whether series, standalone, fiction or nonfiction, has explored themes of family, justice, and love. I truly believe that Eternal is the culmination of a lifetime of my work. The novel is the epic story of a love triangle set against the ventennio, the twenty years of Mussolini's rise and fall. In the meantime, Mussolini and the Fascists are promulgating a barrage of discriminatory Race Laws against Jews like Sandro and his family, systematically stripping away their rights, even before Italy enters World War II. I also think Eternal is the first popular fiction novel covering the Italian Holocaust.

What were some of the specific locations in Italy you visited that informed the novel?  Did you speak to anyone that lived in Italy during that time period about their experience?

Rome struck me as the best location for the novel, since its so-called Ghetto is home to the oldest continuously existing Jewish Community in all of Western Civilization. And during my research, I learned about a horrific event that took place in the Ghetto in October 1943, which historians have termed the Gold of Rome. It was part of the Nazi’s plan to eradicate Rome’s Jews, but it wasn't well-known outside the scholarship, and it needed to be. I loved doing the research for the novel and visited all of the neighborhoods of Rome in which the scenes take place, and even traveled to Carpi to see the remnants of the transit camp that appears in the novel. Lots of details about the research can be found in the Author’s Note and on my website, along with videos filmed on location.