The Wicked City by Beatriz Williams 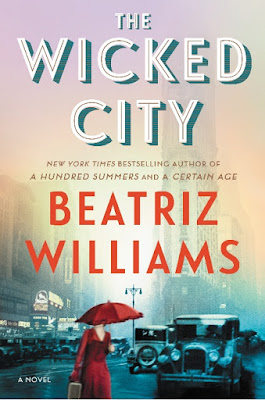 New York Times bestselling author Beatriz Williams recreates the New York City of A Certain Age in this deliciously spicy adventure that mixes past and present and centers on a Jazz Age love triangle involving a rugged Prohibition agent, a saucy redheaded flapper, and a debonair Princetonian from a wealthy family.

When she discovers her husband cheating, Ella Hawthorne impulsively moves out of their SoHo loft and into a small apartment in an old Greenwich Village building. Her surprisingly attractive new neighbor, Hector, warns her to stay out of the basement at night. Tenants have reported strange noises after midnight—laughter, clinking glasses, jazz piano—even though the space has been empty for decades. Back in the Roaring Twenties, the place hid a speakeasy.

In 1924, Geneva "Gin" Kelly, a smart-mouthed flapper from the hills of western Maryland, is a regular at this Village hideaway known as the Christopher Club. Caught up in a raid, Gin becomes entangled with Prohibition enforcement agent Oliver Anson, who persuades her to help him catch her stepfather Duke Kelly, one of Appalachia’s most notorious bootleggers.

Headstrong and independent, Gin is no weak-kneed fool. So how can she be falling in love with the taciturn, straight-arrow Revenue agent when she’s got Princeton boy Billy Marshall, the dashing son of society doyenne Theresa Marshall, begging to make an honest woman of her? While anything goes in the Roaring Twenties, Gin’s adventures will shake proper Manhattan society to its foundations, exposing secrets that shock even this free-spirited redhead—secrets that will echo from Park Avenue to the hollers of her Southern hometown.

As Ella discovers more about the basement speakeasy, she becomes inspired by the spirit of her exuberant predecessor, and decides to live with abandon in the wicked city too. . . .

The Wicked City is the first book in a new series by Beatriz Williams.    There is a dual timeline, 1942 and 1998.     The connection in the story is the building where Geneva Kelly visits a speakeasy and where Ella lives in an apartment.      Of course, there are other connections but this is where it all starts.

The 1942 story was told from Geneva’s point of view.   It was a time of prohibition, jazz, and speakeasies.    The details and descriptions were wonderful,   perfect to a reader who is not familiar with New York City during this time.   I was able to picture the time and the people of the Roaring 40’s.

The 1998 story was told by Ella.    She is recently separated from her cheating husband and moves into a building that feels like home.     Her story was a current time story.   The ideas, the jobs, and the relationships were more of what I was use to.     Ella is a strong character that never failed to stand up for herself and hold strong in those beliefs.

I found The Wicked City to be a fast paced reader that I could not put down.  There are so many twists and turns that I was constantly intrigued on what would happen next.    I am anxious for more of this series.     The Wicked City was left with questions unanswered.      There is more, a lot more, to Ella and Geneva’s story.

ABOUT THE AUTHOR:
A graduate of Stanford University with an MBA from Columbia, BEATRIZ WILLIAMS spent several years in New York and London hiding her early attempts at fiction, first on company laptops as a communications strategy consultant, and then as an at-home producer of small persons before her career as a writer took off. She lives with her husband and four children near the Connecticut shore.

Praise for The Wicked City:

“Williams deftly weaves together Ginger’s Jazz Age woes with Ella’s contemporary troubles, though Ginger steals the show. An otherworldly atmosphere, pulse-raising tension, and swoonworthy romance all provide a stellar foundation for what will become a series starring the dame-with-a-heart Ginger and her stalwart swain, Oliver Anson.”—Booklist

“The novel moves between the storylines smartly and quickly with powerful cliff-hangers and the two women leap off the page with a clarity and strength of purpose that is rare in stories. The connections forged between them across the decades is a journey of discovery for the reader.”—All About Romance