Disappearing from their dangerous life in Chicago, Ginny and her mother went from riches to rags by way of a new life in the sleepy, rural suburbs of New York. Under the illusion of safety, Ginny blossomed into a beautiful young woman with hopes and dreams for a future her mother was determined she would have.

Lucas Young, her best friend’s oldest brother, was the dashing hero in all of her dreams. The man she fantasized about sweeping her off her feet and giving her the happily ever after she had only heard about in her mother’s fairytales.

Sometimes, reality wasn’t what we wanted it to be, though.

What would happen when Ginny found out Lucas wasn’t her Prince Charming after all? Instead, he was a rough and tumble soldier in extremely tarnished armor who had a propensity to break her heart.

Maybe happily ever after wasn’t meant for everyone.

I was warned… Jessie Lane said it would end in a cliffhanger and I thought I was prepared.    I wasn’t. 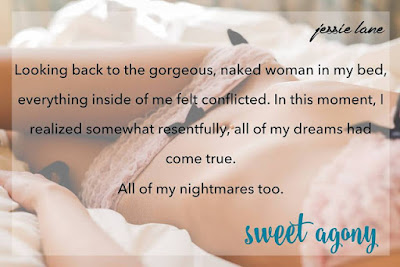 Excerpt:
The woman I loved had disappeared almost as if she had never existed in the first place. The only evidence she’d left behind where the broken, jagged and jaded pieces of what I use to call a heart.
Here I sat in a strip club, surrounded by beautiful women and plenty of other people, and I couldn’t give two shits. I was happy for Sullivan, but his happiness was making me remember what I’d lost. Sort of like rubbing salt into an open wound. It stung like a motherfucker and I wasn’t sure how much longer I could sit here and stomach all of Riley’s good fortune.
“Holy shit. If that chick wasn’t utterly wasted, she’d be a bombshell,” I heard Chase say from the other side of the table.
Well, people watching was better than musing over what I didn’t have, so I looked up in the direction that Chase was staring in and promptly felt my stomach drop to the vicinity of my feet.
Because there, across the large VIP area, was what I’d lost.
Now, she was found.
In a micro mini red dress, she was dancing sloppily to the music, her eyes glassy, indicating she was probably high and drunk, as some playboy in a fucking suit watched her with a displeased yet possessive gaze.
Maybe Miami was the lost and found for men who had epically fucked up their love lives.
A hand clapped down on my shoulder, and I looked over to see Riley looking at me in concern.
“You okay, man? Kara just said our party room in the back is ready, and you didn’t even hear her.”
Looking over his shoulder to where Kara stood, I apologized for not hearing her, and then looked back to Sullivan. “You all go ahead. I’ve got something I need to handle first.”
Riley’s eyebrows shot up. “You do?”
I nodded.
“You need back-up?” Chase asked.
Shaking my head, I gave them the truth. “My past is flashin’ her ass in a red dress across the room and strung out of her mind. I’m gonna go find out why, and then I’m gonna be her goddamn fortune teller and explain what her fucking future is.”
“And that is?” Kara asked, eyes full of curiosity, although a smile was on her face.
“Me.”

He broke her heart… now he has to pick up the pieces.

Lucas Young met the woman meant for him when they were just children. He spent years pushing the sweet, innocent Ginny away for one reason or another instead of claiming what was his, breaking her heart in the process.

Five years later, he runs into Ginny, only he no longer recognizes the person she has become. The good-hearted, free-spirited girl he loved is now a shell of who she used to be, living the sort of life she never wanted. And Lucas is driven to find out why.

However, uncovering Ginny’s secrets will prove to be dangerous for them both.

Will he be able to piece back the broken woman who used to love him with every fiber of her being? Or did he push her away for good? 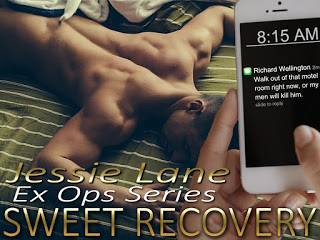 Perhaps it was foolish to jump so blindly back in love with a man who had shredded me into almost non-existence before, but I couldn’t help myself, not when it came to Lucas Young.
On one hand, he was my kryptonite. On the other, he was my Holy Grail.
The last thing I should want, yet the very thing I needed.
The literal, breathing contradiction of my life.
The only person who could destroy me with a word and build me back up with no words at all. 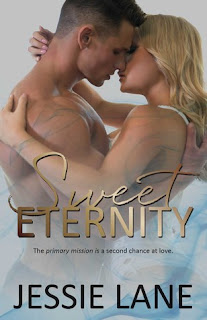 Roses are red, my life is blue, and the man I love is a fool.

Virginia Wellington has accepted her fate of being a pawn in her father’s criminal underworld games, especially if it keeps the people she loves safe. The problem is Lucas has discovered her secrets and the reason she walked away from him. Now he’s determined to save her, even if she doesn’t want to be saved.

Lucas Young now knows why the woman he’s loved since he was a boy disappeared from his life. It’s time he rescued his angel and showed her once and for all that by his side is exactly where she belongs.

YEA!!!   The final part to Ginny and Lucas’ story!!!   I am beyond excited.      Jessie  Lane is my favorite but like most readers I HATE HATE HATE when a book ends in a cliffhanger, which the first 2 books in this series did.   Except with this series the hated cliffhanger endings just increased the anticipation for the next book.      Sweet Eternity does NOT end in a cliffhanger.  Ginny and Lucas get their ending and all the excitement and drama that go with it. 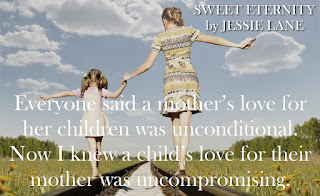 I love Ginny’s spunk.   She has had it all along, but sometimes it was hidden behind her fear and addictions.   In Sweet Eternity it really shows.    The spunk comes with the love that she has for Lucas.    She will do anything to protect him even if it means giving him up to keep him away from her father.      It was also amazing to see the love for her mother.    She could have really disliked her but she didn’t.     Ginny’s heart is huge and so willing to do what has to be done to keep those important to her safe.

Lucas’ team/brothers are some of my favorite characters.     These brothers are found in the other Ex-Ops books and it is always great to catch up with them and get a reminder at how sexy and amazing they are.     The term brother’s is not strong enough for the bond, love, and trust they have for each other.    These men, all Alpha’s, will go literally to the end of the world for each other.

As sad as I am that I will not be reading more of Lucas and Ginny’s story, Jessie Lane wrote the perfect ending to their story.     It isn’t really an ending, it is just the beginning for them.    I can’t wait for possible sneak peeks of them in future books.

Excerpt:
“I didn’t ask you to come storming back into my life. Nor did I ask you to shoot my fiancé, or try to save me from my father—”
“You didn’t ask me?” He shook his head in frustration. “You didn’t tell me. And you sure as shit didn’t give me an S.O.S. Here’s the thing, angel; I don’t need a bat signal to see you’re knee-deep in shit with no shovel to get yourself out of it.”
My frayed nerves snapped, and I lashed out at him … literally.
With a shriek of rage, I reached up with both hands and slapped them on his chest and abdomen, trying to push him off me. Still, he straddled my waist, effectively holding me down with little to no effort. If I didn’t get some space between us, I was going to lose my mind.
Lucas tried to grab both my hands, succeeding in capturing one, and then froze in place as I pointed an accusing finger in his face with the other.
“You’re still a sarcastic pain in the ass; you know that?” I tried to push him off with my free hand again, but he struck as fast as a snake, grabbing it and securing it against his body.
Leaning forward, he growled down at me, “That’s right, baby. I’m still the overbearing jackass I was when we were growing up. And you know what? You’re still the little girl trying to hide from all her big, bad problems. Looks like we haven’t changed a bit.”

She lives in Kentucky with her two little Rock Chicks in-the-making and her over protective alpha husband that she’s pretty sure is a latent grizzly bear shifter. She has a passionate love for reading and writing naughty romance, cliff hanging suspense, and out-of-this-world characters that demand your attention, or threaten to slap you around until you do pay attention to them.

She’s also a proud member of the Romance Writers of America (RWA).