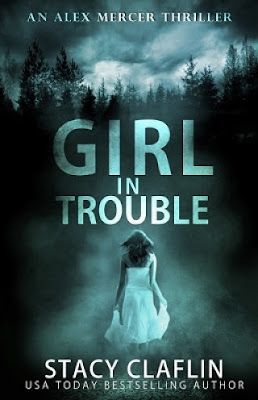 He gave up his daughter years ago, but now he’ll risk his life to save hers.

Alex Mercer is no stranger to kidnappings. The emotional scars still run deep from his sister’s disappearance years earlier. His daughter Ariana remains safe long after her adoption, and he cherishes the few times a year he gets to see her. The joy is palpable when he takes her on their first one-on-one outing. At least until he pauses to answer a text and Ariana disappears…

Wracked with guilt and determined to find answers, Alex teams up with an unlikely ally at the police department. As the clues reveal a pattern of missing girls, the kidnapping case becomes a race against time to save Ariana. What cost is Alex willing to pay to keep his daughter alive?

Girl in Trouble is the first book in a series of thrilling stand-alone novels spun off from the USA Today bestselling Gone Trilogy. If you like heart-pounding suspense, page-turning action, and characters you’ll never forget, then you’ll love Stacy Claflin’s engrossing new series.

The Gone Trilogy by Stacy Claflin was my introduction to her now to find out that she is continuing that series with a spin off series is incredible.    Girl in Trouble is definitely a standalone story but the characters will be familiar to those have read her Gone Series.

Girl in Trouble starts with Alex, Macy, and Zoey all grown up.  Living lives, working, and getting by.   Alex and Zoey had a child together and gave her to Zoey’s parents to raise.   Macy is married to Luke (sigh, I loved Luke) and living life after her kidnapping.     The unthinkable happens and Ariana, Alex and Zoey’s daughter, is kidnapped.

I cannot even imagine.   Living through a kidnapping once is enough but to have to do it again is truly a nightmare.     Stacy Claflin held nothing back.    She portrayed the characters as they would be in real life.   The public crucifies Alex for “letting” his daughter get kidnapped and jumps at ever thing he does to prove that he is the bad guy.     Zoey blames Alex but deep down understands that it happens and is not really anyone’s fault.   It was interesting to see how involved the police let Alex get.    I am not sure this is true to life but for this story it worked wonderfully.

The clues were there, if you choose to follow them you could probably almost figure out who took Ariana.   Yet, the ending will through you for a loop.     Definitely pick up a copy and be sure to go back and read the Gone Series also.