THE FIRE BY NIGHT by Teresa Messineo 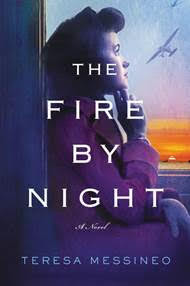 A powerful and evocative debut novel about two American military nurses during World War II that illuminates the unsung heroism of women who risked their lives in the fight—a riveting saga of friendship, valor, sacrifice, and survival combining the grit and selflessness of Band of Brothers with the emotional resonance of The Nightingale.

In war-torn France, Jo McMahon, an Italian-Irish girl from the tenements of Brooklyn, tends to six seriously wounded soldiers in a makeshift medical unit. Enemy bombs have destroyed her hospital convoy, and now Jo singlehandedly struggles to keep her patients and herself alive in a cramped and freezing tent close to German troops. There is a growing tenderness between her and one of her patients, a Scottish officer, but Jo’s heart is seared by the pain of all she has lost and seen. Nearing her breaking point, she fights to hold on to joyful memories of the past, to the times she shared with her best friend, Kay, whom she met in nursing school.

Half a world away in the Pacific, Kay is trapped in a squalid Japanese POW camp in Manila, one of thousands of Allied men, women, and children whose fates rest in the hands of a sadistic enemy. Far from the familiar safety of the small Pennsylvania coal town of her childhood, Kay clings to memories of her happy days posted in Hawaii, and the handsome flyer who swept her off her feet in the weeks before Pearl Harbor. Surrounded by cruelty and death, Kay battles to maintain her sanity and save lives as best she can . . . and live to see her beloved friend Jo once more.

When the conflict at last comes to an end, Jo and Kay discover that to achieve their own peace, they must find their place—and the hope of love—in a world that’s forever changed. With rich, superbly researched detail, Teresa Messineo’s thrilling novel brings to life the pain and uncertainty of war and the sustaining power of love and friendship, and illuminates the lives of the women who risked everything to save others during a horrifying time.

I am a huge fan of World War II yet very rarely do I find a book about women during this time especially nurses on the front lines, right next to the men.    This is an amazing book.    The realities of the dangers that these nurses faced while trying to save the men who were fighting was eye opening to me.

Jo and Kay are friends from nursing school and they both enlisted in the Army as nurses.   As chance would have it they are stationed in two entirely different worlds.    Kay is in the Phillipines and is “safe” until the Japanese attack.    Then she is forced into captivity until the end of the war.     Jo is sent to Europe  and left to care for 6 injured while waiting to be relocated to another area.

Kay and Jo tell their stories in alternating chapters.   There were times that I was more invested in one character than the other but I liked that they were not just telling the same events over and over.   Jo told her story in the time of the war and then what had happen with her life after the war.     Kay’s story was a lot about the nurses history and  her life in the camp.    Their stories did not overlap and their experiences were so different it was hard to imagine that they were part of the same war.

I felt like this was a realistic look at the war from a nurses point of view and how these nurses could have lasting effects after the war was over.      This is a book I will not forget and I cannot wait to recommend it to my fellow WWII readers.

“Messineo is at her best when describing the squalid environment and psychological mayhem, creating an All Quiet on the Western Front from American women's perspectives… Jo's and Kay's devastating military experiences ring true. A vibrant telling of the nurses' nightmares during a brutal war.”—Kirkus Reviews

“Meticulously researched…Messineo has an eye for accurate historical detail and skillfully portrays her characters’ inner emotions; this story will stay with readers long after they have finished the book.”—Library Journal

“Messineo’s writing style, in which scenes often play out without extensive explanation but are later elucidated, adds to the feel of wartime chaos…The novel’s strength lies in how well it conveys—mostly without sentimentality—the selflessness and bravery of nurses during the darkest hours….Engaging.”—Publishers Weekly

Teresa Messineo spent seven years researching the history behind THE FIRE BY NIGHT, her first novel. A graduate of DeSales University, her varied interests include homeschooling her four children, volunteering with the underprivileged, medicine, swing dancing and competitive athletics. She lives near Philadelphia with her family.

MORE PRAISE FOR THE FIRE BY NIGHT

“An epic story of love, loss and survival that weaves meticulous research together with the complexities of the human heart. This novel is not to be missed."
—Karen White, New York Times bestselling author of FLIGHT PATTERNS

“A luminous once-in-a-lifetime story of war, love, loss and the enduring grace of the human spirit. I can't remember the last time I was so deeply moved by a novel. You must read this book!”
—Lauren Willig, author of the Pink Carnation series and THE OTHER DAUGHTER

“THE FIRE BY NIGHT is quite simply historical fiction at its best: a genuine page-turner, with vivid language and rich, unforgettable characters. But more than that, it’s a startling anthem to the service and sacrifice of women in World War II.”
— David Gilham, author of THE CITY OF WOMEN

“With strong, sharp characters, explosive situations, marvelous detail, epic sweep, this fine first novel of war and friendship has it all.”— Laird Hunt, author of NEVERHOME