What Was Mine by Helen Klein Ross

I received What Was Mine as part of the SheReads community.   This is a community of book lovers that read a selection of books promoting our thoughts on them.   We receive the books in exchange for an honest review. 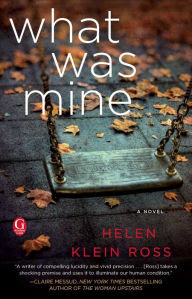 Simply told but deeply affecting, in the bestselling tradition of Alice McDermott and Tom Perrotta, this urgent novel unravels the heartrending yet unsentimental tale of a woman who kidnaps a baby in a superstore—and gets away with it for twenty-one years.

Lucy Wakefield is a seemingly ordinary woman who does something extraordinary in a desperate moment: she takes a baby girl from a shopping cart and raises her as her own. It’s a secret she manages to keep for over two decades—from her daughter, the babysitter who helped raise her, family, coworkers, and friends.

When Lucy’s now-grown daughter Mia discovers the devastating truth of her origins, she is overwhelmed by confusion and anger and determines not to speak again to the mother who raised her. She reaches out to her birth mother for a tearful reunion, and Lucy is forced to flee to China to avoid prosecution. What follows is a ripple effect that alters the lives of many and challenges our understanding of the very meaning of motherhood.

Author Helen Klein Ross, whose work has appeared in The New Yorker, weaves a powerful story of upheaval and resilience told from the alternating perspectives of Lucy, Mia, Mia’s birth mother, and others intimately involved in the kidnapping. What Was Mine is a compelling tale of motherhood and loss, of grief and hope, and the life-shattering effects of a single, irrevocable moment.

I was not sure I could read this book.    A child being kidnapped is a parent’s worst nightmare.   Yet, I could not stop reading What Was Mine.     It started innocently enough and then Lucy takes Mia.    I had a hard time accepting Lucy’s justification.   She talked herself into it being okay that she took another person’s baby just because she could not have one herself.     The one thing that redeemed Lucy to me, just a little, was that she took amazing care of Mia and raised her to be a wonderful young lady.     Lucy keeps Marilyn in her thoughts constantly, always thinking about the hell she must be going through in the lost of a her daughter.

While the book is not easy, I could not put it down.   When I had to stop reading to go on with life I continued to think about the story.   I found myself sneaking and reading just one more chapter, page, or paragraph.  I liked that the paragraphs were labeled with who was telling their side of the story and that the chapters were usually short and easy to read through.      It was also interesting that so many people told their story.    There was no part of the story left untold.

I have to say the ending surprised me.   I am not sure what I expected but that was not it.     It is a satisfying ending, just not an expected ending.

I recommend checking this book out.   It is not a story for everyone but it is a story that will stay with you long after you are finished reading it.