The Edge of Lost by Kristina McMorris 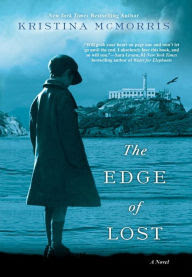 On a cold night in October 1937, searchlights cut through the darkness around Alcatraz. A prison guard’s only daughter—one of the youngest civilians who lives on the island—has gone missing. Tending the warden’s greenhouse, convicted bank robber Tommy Capello waits anxiously. Only he knows the truth about the little girl’s whereabouts, and that both of their lives depend on the search’s outcome.

Almost two decades earlier and thousands of miles away, a young boy named Shanley Keagan ekes out a living as an aspiring vaudevillian in Dublin pubs. Talented and shrewd, Shan dreams of shedding his dingy existence and finding his real father in America. The chance finally comes to cross the Atlantic, but when tragedy strikes, Shan must summon all his ingenuity to forge a new life in a volatile and foreign world.

Skillfully weaving these two stories, Kristina McMorris delivers a compelling novel that moves from Ireland to New York to San Francisco Bay. As her finely crafted characters discover the true nature of loyalty, sacrifice, and betrayal, they are forced to confront the lies we tell—and believe—in order to survive.

Within the wonderful pages of The Edge of Lost I found myself wondering how a young boy could be done wrong so many times and still come out with such a strong sense of self worth and a true heart.     Shanley (Tommy or Shan)’s integrity never wavered, his kindness was shown in everything he did, and his sense of family was true.     Even as a young lad, before coming to America, he had the cards stacked against him with an uncle who was a drunk and abusive.   Yet, he arrived and showed what a great person he was.   He respect authority, worked hard, and stayed true to what he knew was the right thing.   Shanley was a character that spoke to me.

A fun aspect of this story was the history it shared.   From the streets of New York with the self segregated neighborhoods, the immigrants settling in, the crime, and prohibition it was brought alive within the words from Kristina McMorris.      Shan travels to other places and they are also shared with the reader in ways that make them feel like they are right there with them.

The Edge of Lost is a book that has so much to offer.   There are well developed characters, wonderful description of Dublin, New York, and another place, and so much more.     I recommend checking it out ASAP.

“Will grab your heart on page one and won’t let go until the end—and if you’re like me, not even then. I absolutely love this book, and so will you.”
— Sara Gruen, #1 New York Times bestselling author of Water for Elephants

“Compelling, resonant and deeply moving, The Edge of Lost is an absorbing tale of deceit and self-deception, survival and second chances, the ties that bind and the lure of the unknown.”
— Christina Baker Kline, #1 New York Times bestselling author of Orphan Train

“In The Edge of Lost Kristina McMorris takes us on a thrilling ride . . . I found myself thoroughly immersed in her richly evocative settings, just as I was captivated by the pure humanity of her characters. A wonderful read!”
— David Gillham, New York Times bestselling author of City of Women

“A beautifully told story about a young man’s journey through adversity and loss with an exhilarating ending that I couldn’t put down and stayed up well past my bedtime to finish.”
— Charles Belfoure, New York Times bestselling author of The Paris Architect

“With prose as lyrical as the music woven through its narrative, and boasting impeccably observed historical details, The Edge of Lost is a thoroughly mesmerizing novel. I adore everything that Kristina McMorris writes and this book is no exception.”
— Jennifer Robson, international bestselling author ofSomewhere in France

“The Edge of Lost takes readers on an enthralling journey . . . right up to a tense, edge-of-your-seat ending that left me breathless. An absorbing, addictive read.”
— Beatriz Williams, New York Times bestselling author of The Secret Life of Violet Grant
Posted by A Soccer Mom's Book Blog at 5:00 AM