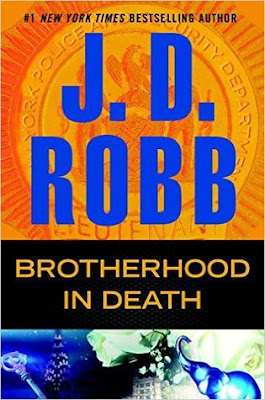 Dennis Mira just had two unpleasant surprises. First he learned that his cousin Edward was secretly meeting with a real estate agent about their late grandfather’s magnificent West Village brownstone, despite the promise they both made to keep it in the family. Then, when he went to the house to confront Edward about it, he got a blunt object to the back of the head.

Luckily Dennis is married to Charlotte Mira, the NYPSD’s top profiler and a good friend of Lieutenant Eve Dallas. When the two arrive on the scene, he explains that the last thing he saw was Edward in a chair, bruised and bloody. When he came to, his cousin was gone. With the mess cleaned up and the security disks removed, there’s nothing left behind but a few traces for forensics to analyze.

As a former lawyer, judge, and senator, Edward Mira mingled with the elite and crossed paths with criminals, making enemies on a regular basis. Like so many politicians, he also made some very close friends behind closed—and locked—doors. But a badge and a billionaire husband can get you into places others can’t go, and Eve intends to shine some light on the dirty deals and dark motives behind the disappearance of a powerful man, the family discord over a multimillion-dollar piece of real estate . . . and a new case that no one saw coming.

While the characters are always the same within the pages of a In Death book, J.D. Robb manages to change up the plots enough to keep the reader thoroughly entertained.       I know what to expect within the story.    The story or Roarke and Eve with their forever love, steamy sex, and battles of relationship/marriage rules.      Add to them Peabody and McNabb with their touchie feelie time, working together, and solving murders one clue at a time.      Then there is the murder which is always entertaining and keeps me guessing at who did it and how they will be caught.

With Brotherhood in Death I got to know the Mira family better.   Dr. Charlotte (love the name) Mira has been in all the In Death books with her profiling and support of Eve and the NY Police.   Her husband Dr. Dennis Mira has been mentioned but not really explored in past book so I enjoyed the look into their lives and learn more about them.     Dennis is a great support character and it was heartwarming to see how perfect he was for his wife.

The race against time, the clues, and the murders are all part of the draw to this series.     J.D. Robb did it again.   With 42 books in this series you would think it would be getting difficult to keep it going yet I loved this one just as much as the first one.     I recommend checking out this series, which can be read out of order or just one at a time.

J. D. Robb/Nora Roberts is the bestselling author of more than 200 novels with more than 500 million copies of her books in print worldwide.  Every Nora Roberts and J. D. Robb title released in 2015 hit the New York Times bestseller list, keeping up a streak started in 1999. You can find Robb on the web at www.jdrobb.com or join the discussion on Facebook (jdrobbauthor) with her 133,000+ fans.
Posted by A Soccer Mom's Book Blog at 5:00 AM