I received a complimentary copy from Loren Jaggers, Senior Publicist at Berkley Publishing Group/New American Library in exchange from a honest review. 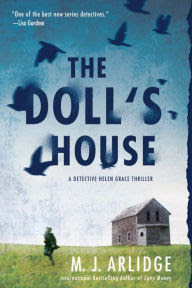 Ruby wakes up in a strange room. Her captor calmly explains that no one is looking for her. No one wants her. Except him.

When the body of a woman is found buried on a secluded beach, Detective Helen Grace is called to the scene. She knows right away that the killer is no amateur. The woman has been dead for years, and no one has even reported her missing. But why would they? She’s still sending text messages to her family.

Helen is convinced that a criminal mastermind is at work: someone very smart, very careful, and worst of all, very patient. But as she struggles to piece together the killer’s motive, time is running out for a victim who is still alive...

I have become such a HUGE Helen Grace fan.      This is the third book in this series and each book can be read as a standalone story.   Although reading them in order just enhances the stories.

The Doll’s House is a little tamer (if you can call being kidnapped and held in a small cell tame) than the other books in this series.    There wasn’t as much frightening text with the pages.   Not to say that the kidnapper wasn’t scary, I would not have wanted to live or deal with him, but it was not frightening to me.     I had a hard time relating to the woman, Ruby, that he had kidnapped.     I felt for her, wanted her to be found alive, but I just couldn’t feel her fear.    What I loved about Ruby was her strength.    She never gave up; even when she thought she was giving up she was plotting her escape.   She knew not to believe what her captor told her, but knew enough to go along with his story.

Helen Grace is my hero.   With a tough case she was still able to hold her own against those who were trying to knock her down.    She held tight to her beliefs.  When she got a lead she followed it until she knew it would not lead her in the right direction and then quickly found another lead to chase.     The secondary characters, Emilia, Jake, and Charlie are all strong characters and as the series continues the reader gets to learn more and more about them.

I love the short chapter format as the reading moves along quickly.     I recommend checking out The Doll’s House and the rest of this series.

Check out my thoughts on the previous books in this series...