Published February 2, 2016 by Berkley
Thank you Lauren Burnstein, publicist,  from Berkley & NAL, Penguin Random House a c opy of Casualities in exchange for an honest review. 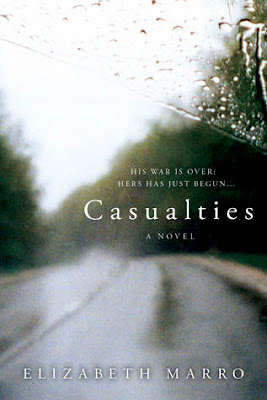 A heartbreaking and insightful debut novel about the wars we fight overseas, at home, and within our own hearts.

As an executive for one of the most successful military defense contractors in the country, Ruth Nolan should have been thrilled when her troubled son, Robbie, chose to join the marines. But she wasn’t. She was terrified.

So, when he returns home to San Diego after his second tour in Iraq, apparently unscathed, it feels like a chance to start over and make things right—until a scandal at work tears her away from their reunion. By the next morning, Robbie is gone. A note arrives for Ruth in the mail a few days later saying, “I’m sorry for everything. It’s not your fault. I love you.”

Without a backward glance, Ruth packs up Robbie’s ashes and drives east, heading away from her guilt and regret. But the closer she gets to the coast she was born on, the more evident it becomes that she won’t outrun her demons—eventually, she’ll have to face them and confront the painful truth about her past, her choices, the war, and her son.

I am intrigued by war and what it does to the people who fight in it and the people who are left behind by those who fight.    Casualties had both views.     Robbie comes home from war troubled.    He doesn’t come home to his mother instead he puts off seeing her.    Ruth misses Robbie so much and just wants to see him.     When he finally comes home circumstances at her work make it impossible for her to spend the time she wants with him.    Then Robbie is gone and Ruth is devastated.

Casualties is the story of how Ruth handles Robbie being gone.    She runs.   She runs far and without leaving work with her friends or co-workers.    I felt for Ruth.    I am not sure that she handled everything how she should have but how can she have known what would happen?    When she meets Casey I was scared for her.    He seemed creepy to me.  I could not trust him, I could not believe that she would go with him, and I was really worried.    As the story continued I could see how much they needed each other.   They both were running from things, keeping secrets, and wrestling with the future.

I picked up Casualties and thought it was a book about Robbie returning from war, yet it was more the story of his mother.     It still showed what a difficult time a family can have dealing with a war that loved ones are fighting.

Marro explores the challenging terrain of mother-child relationships, marked as they are with hopes, missed opportunities, regrets, and in the end, the need for release and acceptance. As a civilian exploring the world of the military and defense industries, she often felt like she “did not have a right to go there.” But in piecing together Ruth’s story, Marro was forced to move past that feeling of “otherness,” and succeeds in offering a fresh perspective on the challenge of moving forward—even when you are a casualty of circumstances. CASUALTIES was a finalist for the 2014 San Diego Book Awards Association Contestunder the category of unpublished novel.

What others are saying:

“Marro’s gorgeous debut is about war, grief, guilt, and grappling with the truths you don't expect, and finally taking the risk and acknowledging the ones that you do. Moving and full of heart.”—Caroline Leavitt, New York Times bestselling author of Is This Tomorrow and Pictures of You

“With its gripping plot and seasoned prose, it is hard to imagine that Casualties is Elizabeth Marro’s debut novel.  She writes of a mother’s worst nightmare, and offers no easy answers.  By the end of her novel we care for her characters, and hope that each can find the elusive redemption they so desire.”—Alan Russell, bestselling author of Burning Man

“Conflicting human needs, difficult choices, missed opportunities, and the random luck of the draw challenge the true-to-life, complicated characters in Elizabeth Morro’s page-turning novel. This is an important story set against the drama of today’s volatile world that asks moral questions yet, ultimately, resides in the heart.” —Judy Reeves, Author of Wild Women, Wild Voices

“There’s an emotional jolt early in the pages of Elizabeth Marro’s debut novel Casualties that reminds us not all battle scars start on the battlefield. The bell-like tolls of this tragic event will reverberate throughout the rest of this heartbreaking novel as Ruth and Casey, two strangers broken by grief and regret, reluctantly join together on a cross-country road trip. Elizabeth Marro made me care about these two people so much that by the end of the novel I’d forgotten they were fictional characters and I was ready to call them up to see how they were doing and if they’d finally found their way toward peace and forgiveness.  That’s the mark of some strong storytelling!”—David Abrams, author of Fobbit