Devoted in Death by J.D. Robb 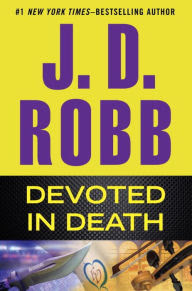 When Lieutenant Eve Dallas examines a body in a downtown Manhattan alleyway, the victim’s injuries are so extensive that she almost misses the clue. Carved into the skin is the shape of a heart—and initials inside reading E and D . . .

Ella-Loo and her boyfriend, Darryl, had been separated while Darryl was a guest of the state of Oklahoma, and now that his sentence has been served they don’t ever intend to part again. Ella-Loo’s got dreams. And Darryl believes there are better ways to achieve your dreams than working for them. So they hit the road, and when their car breaks down in Arkansas, they make plans to take someone else’s. Then things get messy and they wind up killing someone—an experience that stokes a fierce, wild desire in Ella-Loo. A desire for Darryl. And a desire to kill again.

As they cross state lines on their way to New York to find the life they think they deserve, they will leave a trail of evil behind them. But now they’ve landed in the jurisdiction of Lieutenant Dallas and her team at the New York Police and Security Department. And with her husband, Roarke, at her side, she has every intention of hunting them down and giving them what they truly deserve . . .

If you have not read the in Death series by J.D. Robb this is the perfect chance to jump on into the series.    You can start this series at any point, they do not have to be read in order.   The characters are reoccurring but each book has its own storyline.     The bonus of reading them in order is you get more of the progression of the relationships of the main characters, but it is easy to catch what is happening.    J.D. Robb does a great job of not wasting words with a ton of back story but giving enough for the reader to feel caught up.

Devoted in Death shows how in the the future New York Eve Dallas and her crew carry on with their work solving crimes for those that were wronged and can no longer share their voices.   I always find it interesting to see who will be the next victim and how Eve and her sexy hubby, Roarke, will work together to solve the crime.    Peabody and the rest of Eve’s work crew seem to work seamless together to solve the horrific crimes.    I enjoy the banter and the hard work the crew does while keeping as much integrity for the dead.

While this is set in 2060 and has some futuristic happenings, it is not sci-fi ish.    The happenings of 2060 are realistic, just more electronically controlled.    The cars can travel vertically, the protection available for police is more substantial,   the things computers can do and how their information shared is more advanced, and there is some slang that is not familiar to those of us in 2015.   Yet, the reader can relate to Eve’s world easily.

Again, if you have not read this series you are missing out.    I highly recommend checking out Devoted in Death and the rest of this series.