A Curious Beginning by Deanna Raybourn 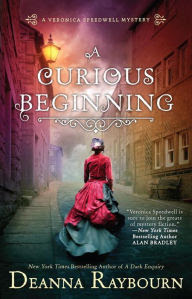 “With wicked intelligence, Deanna Raybourn has created a fresh and fascinating sleuth. Veronica Speedwell is sure to join the greats of mystery fiction. Impeccably plotted and meticulously researched, A CURIOUS BEGINNING will leave you, as it left me,
whimpering for more.”
—Alan Bradley, New York Times bestselling author of the Flavia de Luce series


As of December 1, 2009, According to The Federal Trade Commission (FTC),  product reviewers on blogs must disclose whether they received products for free or received payment for their review.
The books I review on this site ( A Soccer Mom's Book Blog) are sent to us by publishers, authors or downloaded from Netgalley. .This is a very common practice.  I never take payments for these reviews and all the reviews on this site are our own thoughts and feelings and are not influenced
Posted by A Soccer Mom's Book Blog at 5:00 AM