Review for The One You're With by Lauren K. Denton

The One You're With by  Lauren K. Denton 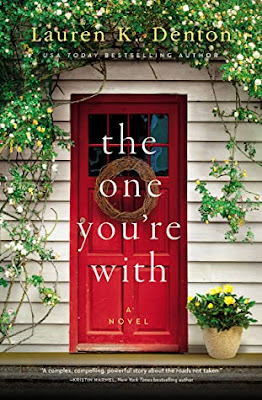 From Goodreads:  Written in Lauren K. Denton’s signature Southern style, The One You’re With tells a story of marriage, choices, and what a good life really looks like.

High-school sweethearts Mac and Edie Swan lead a seemingly picture-perfect life in the sleepy-sweet community of Oak Hill, near Mobile, Alabama. Edie is a respected interior designer, Mac is a beloved pediatrician, and they have two great kids and a historic home on tree-lined Linden Avenue. From the outside, the Swan family is the definition of “the good life.” And life is good—mostly. Until a young woman walks into Mac’s office one day. A young woman whose very existence threatens all Mac and Edie have built and all they think they know about each other.

Nineteen years after a summer apart, with a family and established lives and careers, the past that Mac and Edie thought they left behind has come back to greet them. For the first time, constants in their lives are called into question: their roles as parents, their reputation as upstanding members of the community, and the very foundations of their marriage. As they wade through the upheaval in both their family and professional lives, they must each examine choices they made long ago and chart a new course for their future.

My Thoughts…The perfect marriage is not always what it seems.  After settling into a happy life, Mac and Edie Swan have a wrench thrown into their lives.   It shakes their marriage, puts the family at risk of losing it all.  A young woman appears and shares a secret, a HUGE secret and it affects everyone.

I found The One You’re With an easy read.  The story moved at a good pace that kept me entertained but did not skip any important parts.   I got to know the characters and understand their thoughts.   I loved how real they were.   Their reactions, feelings, and personalities are how people in my life would react if put in the same position.   The pain, the love, and the respect for each other was strong and showed the love they have for each other.

Edie was my favorite character.  She was put in an extremely difficult position and instead of letting it push her under, she pushed through found strength that she did not even know she possessed and kept her family together.    As a mom I could relate and understand her pain, her reactions, and her love for those important to her.

The One You’re With is a book of family dynamics and messiness but also of strength and love of a family.

**Thank you NetGalley for a copy of the book in exchange for my honest review. 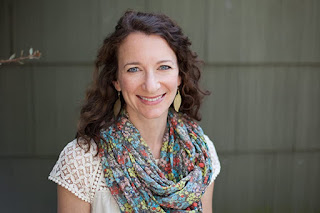 Meet Laura K. Denton…Born and raised in Mobile, Alabama, Lauren now lives with her husband and two daughters in Homewood, just outside Birmingham. In addition to her fiction, she writes a monthly newspaper column about life, faith, and how funny (and hard) it is to be a parent. On any given day, she’d rather be at the beach with her family and a stack of books. Her first two novels, The Hideaway (2017) and Hurricane Season (2018), both became USA Today bestsellers, with The Hideaway also a Wall Street Journal and Amazon Charts bestseller. WORLD Magazine stated that her third novel Glory Road (2019) “exudes so much Southern charm that the scent of magnolias practically wafts from the pages.” Publishers Weekly gave her fourth novel The Summer House a starred review, and bestselling author Katherine Reay deemed it “the perfect summer read!”

But there’s always much more, isn’t there?…

I have a trunk in the basement that is full to the top with journals, most of them tattered and spiral-bound. My first journal was actually a diary, complete with little gold key. It had a puffy turquoise and pink cover, and I bought it at Bel Air Mall in Mobile. I have a vivid memory of sitting on a bench outside the pet store (malls used to have pet stores?!) and writing on that first crisp, pink page.

Somehow, the turquoise and pink journal grew to that trunk with 20+ journals stuffed inside. My journaling matured from puppies and birthday parties, to friends and boys, to college, new jobs, the joys of marriage, and the struggle of infertility. Through writing, I found a way to process thoughts and ideas, worries and problems. I don’t journal anymore about my day, but I do often write out prayers (when I have time to sit and actually have focused prayer time.) So I still process thoughts and worries through writing, it’s just directed at God instead of a diary…or it’s making up fictional worlds and allowing my characters to go through difficult situations and come out the other side smarter and stronger.

In the same way writing has already been with me, so has reading. If you talk to my dad, he’ll have you believe I was reading the newspaper when I was four years old. I have my doubts about that, but suffice it to say I’ve been a voracious reader since I was old enough to understand the mechanics of words strung together in sentences. From Scholastic Book Fairs in elementary school…to Ramona, Henry Huggins, and Runaway Ralph…to the entire Babysitters Club series, I was a reading kid. And reading kids tend to turn into reading adults.

My love affair with southern writing started with Pat Conroy, as it has for many people. Then I stumbled on Balls and Crossing Blood by Nanci Kincaid in the Haley Center bookstore at Auburn University. The books were shelved in “southern fiction,” a genre I didn’t know existed until then. I quickly realized that was my preferred shelf in that or any other bookstore.

After graduating from Auburn, I secured an internship, then a full-time job, at Southern Progress Corporation in Birmingham. Sometime in these after-college years, the idea of writing my own book began to take shape. I toyed with various storylines—all taking place in and around the South—but nothing came to fruition. And by “nothing came to fruition,” I mean I wrote anywhere from 20 to 40 pages, then gave up when a) I realized I had no idea where the story was going or b) the shiny newness wore off and it got hard.

I finally wrote my first full-length manuscript in 2011. I had a 2 1/2-year-old by then and I wrote two mornings a week while she was in preschool and during her afternoon naps. It took me about five months to write, and it really wasn’t very good, but a fire had been lit inside me and I knew I’d found my calling.

After putting that book away, I tried idea after idea, but nothing stuck. Finally, I asked myself what kind of book I wanted to read. I immediately thought of the Mobile area, specifically the eastern shore of Mobile Bay. And I thought of New Orleans, a city I’ve always loved. A bed and breakfast appeared, as did something about an eccentric grandmother. Slowly, a story began to take shape, as they do. But this time, all that practice—the fits and starts and the completed (albeit bad) book—gave me the perseverance and drive I needed to forge ahead with this one.

After ten months of writing THE HIDEAWAY, six months of revising, about ten months of querying, and one very gracious fellow author passing my query on to an editor friend of hers, I had serious interest from Thomas Nelson (a division of HarperCollins). Soon after, I signed on to work with my super-agent Karen Solem, and after a few more months of waiting, I signed a two-book deal with Thomas Nelson.

When I’m not writing or editing, I’m going to the grocery store, playing with my two daughters and new puppy Ruby, reading, exercising, sweeping the kitchen floor again, listening to good music with my husband, and waiting impatiently for our next trip to the beach.