Feature for The Final Girl Support Group by Grady Hendrix 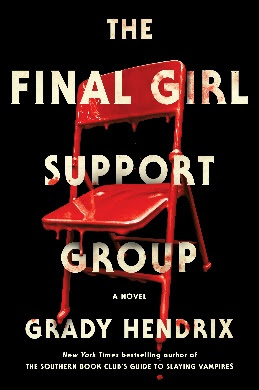 A fast-paced, thrilling horror novel that follows a group of heroines to die for, from the brilliant New York Times bestselling author of The Southern Book Club’s Guide to Slaying Vampires.

In horror movies, the final girl is the one who’s left standing when the credits roll. The one who fought back, defeated the killer, and avenged her friends. The one who emerges bloodied but victorious. But after the sirens fade and the audience moves on, what happens to her?

Lynnette Tarkington is a real-life final girl who survived a massacre twenty-two years ago, and it has defined every day of her life since. And she’s not alone. For more than a decade she’s been meeting with five other actual final girls and their therapist in a support group for those who survived the unthinkable, putting their lives back together, piece by piece. That is until one of the women misses a meeting and Lynnette’s worst fears are realized—someone knows about the group and is determined to take their lives apart again, piece by piece.

But the thing about these final girls is that they have each other now, and no matter how bad the odds, how dark the night, how sharp the knife, they will never, ever give up.

Purchase at Amazon or Barnes and Noble

If you want to contact him then send him an email to: grady@gradyhendrix.com

Grady Hendrix writes fiction, also called "lies," and he writes non-fiction, which people sometimes accidentally pay him for. He is the author of Horrorstör, the only novel about a haunted Scandinavian furniture store you'll ever need. It has been translated into 14 languages and is being turned into a movie from the people who made quality films like 1917 and Black Swan. Foolishly, they are paying Grady to write it. He is busy inserting a whole lot of tutus into it right now.

His novel My Best Friend's Exorcism, about demonic possession, friendship, exorcism, and the Eighties, is basically Beaches meets The Exorcist and it caused the Wall Street Journal to call him "a national treasure" and received rave reviews from everyone from Kirkus to Southern Living. Surprisingly, this is still not enough for him to earn his mother’s love.

Refusing to stop trying to prove himself to his family, he also wrote Paperbacks from Hell, a history of the horror paperback boom in the Seventies and Eighties. It is so popular it won a Stoker Award, and while you may not know what that is, trust me when I say that it is a big, big deal that gets Grady 20% off all purchases at the Franklin Mint. His next novel was We Sold Our Souls, a heavy metal take on the Faust legend, which hit bookstores in 2018 and got selected as one of the best books of 2018 by Library Journal, the Chicago Public library, and, finally, his mom. It’s also one of Locus’s recommended novels of 2018 and earned him an article in the Los Angeles Review of Books that makes him sound like some kind of smart person or something. He’s not.

His latest novel is the New York Times bestseller, The Southern Book Club’s Guide to Slaying Vampires, which is being turned into a TV series by Amazon right now because they own everything. In a surprise twist, this book is actually about a Southern vampire getting clubbed to death with books by the band, Slayer.

Grady Hendrix used to be a journalist, which means that he was completely irrelevant and could be killed and turned into food at any time. He is one of the founders of the New York Asian Film Festival, but he is not responsible for the bad parts of it. He is also not Asian. For years he was a regular film critic for the New York Sun but then it went out of business. He has written for Playboy Magazine, Slate, The Village Voice, the New York Post, Film Comment, and Variety. He has a hard time making up his mind.

There is a science fiction book called Occupy Space that he is the author of, and also a fantasy book called Satan Loves You which he wrote as well. Along with his BFF from high school, Katie Crouch, he is the co-author of the YA series, The Magnolia League. He co-authored Dirt Candy: A Cookbook, the first graphic novel cookbook in America, with his wife and Ryan Dunlavey. It's now in its seventh printing which means that at least 24 people have bought a copy. His fiction has appeared in Strange Horizons, Pseudopod, and the anthology, The Mad Scientist's Guide to World Domination.

He is very, very beautiful, but if you ever meet him, please do not let this make you uncomfortable. He does not judge.

The New Yorker once ran a short profile of him, and this means that when the time comes and they are lining people up for the Space Arks he will be guaranteed a seat ahead of you.