Spotlight for A Very Fumbling Merry Christmas by Eva Haining 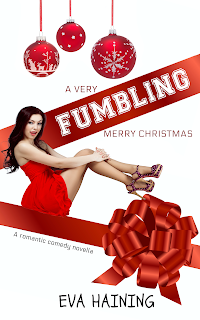 With the holidays looming, Faith and Hunter begin the festive season with a bang.
Join the new Mr. & Mrs. Vaughn as they embark on their first Christmas together, and nothing says Christmas like a secret Santa wager! Back to their old tricks, Faith and Hunter attempt to best each other when it comes to gift giving.
When their best friends want in on the wager, be ready for some fumbling, holiday shenanigans!
A holiday, romantic comedy novella.

“I didn’t get to tell you about my great idea yet. Hunter totally stole my thunder.” She grabs my hand and drags me over to the couch. I try to adjust my pants, but there’s no hiding the tripod I’m sporting right now.

“I can see why you chose Hunter to pop your cherry, girl. You’re lucky that monster didn’t split you in two.”

“Stop checking out my husband’s cock, Zee!” I love that Faith’s tone is jokey but with a possessive undercurrent.

“In my defense, it’s kind of hard to miss right now.” Coop’s brow furrows, but he keeps his mouth shut, which is so unlike him. Has he been replaced with an alien imposter? This guy has got it bad.

“Secret Santa!” Faith blurts out. She does that sometimes—shouts one or two words that really should be part of a coherent thought. I’ve gotten used to reminding her that I can’t actually read her mind.

“You’re going to have to elaborate on that thought, love.” I chuckle as she realizes we have no idea what she’s talking about.

“Yeah. So, I was thinking you and I could have a little wager.” The second I hear the word, I know I’m in for a crazy December.

“Another wager? You know how the last one turned out.”

“Exactly! I got the man of my dreams, and I won the wager. You cashed in my V-Card. You really punched it, stamped it, humped it to within an inch of its life.” Coop and Zee snigger as Faith goes off on one of her tangents.

“My favorite part of Christmas was never big or expensive gifts. It was the junk I got in my stocking. The silly games or some little trinket that ‘Santa’ knew I liked. I think it would be fun to have a Secret Santa wager. From now until Christmas Eve, we see which one of us can find the most ridiculous, funny gift for each other. What do you think?”

God, I love her sense of humor. This is actually a really good idea. It will certainly make the yuletide interesting. Not that it could ever be dull with Faith around. I hold out my hand to shake on it.

“You have yourself a deal, Mrs. Vaughn.”

“Oh, hold up!” Zee interjects. “We want in on that wager.” Coop looks as surprised as me.

“Come on. We could use some fun! If we’re all going to Aspen together, we should all be in on this wager. They got to have so much fun with their last one. Why shouldn’t we have some laughs?”

“I thought you weren’t sure if you wanted to keep me around until Christmas.”

“Don’t be a drama queen, Coop. Let’s do it, please?” One look at her pouty lips, and he’s a goner. They both turn to us expectantly, seeking entrance to another of Faith’s hair-brained plans.

“Wasn’t my idea. Not my call. What do you think, Faith? It’s your hair-brained scheme. Does this plan have room for two more?”

“I’d have gladly helped with the first plan if given the chance.” Coop thinks he’s being funny, but I want to throat punch him right about now.

“Say that again, and your Christmas present from me will be a shallow grave.” Faith is practically bouncing, she’s so excited at the prospect of a new game.

“Okay, okay. We can make this work. It’s going to be even better with all four of us. First, we need some ground rules.”

“First of all, there’s a hundred dollar spend limit for any one gift. Second, you can only gift once a day. Rule three, this is anonymous in the spirit of Secret Santa. We don’t have to pick names out of a hat or anything. You’re free to gift to whomever you choose. On Christmas Eve, we’ll reveal who gave each of the gifts. Sound good?”

Coop immediately chimes in with the same thought as me. “Are we allowed dirty gifts?” Faith looks to me with mischief dancing in her eyes like sugar plum fairies before wiggling her eyebrows suggestively.

“Anything goes!” She’s going to be the death of me.

“Are you sure about that? Coop has a pretty twisted sense of humor.”

“It’ll be fun. Yes, anything goes.” Then, I see the light go on in Zee’s eyes. She’s already thinking up something dirty.

“We need to add another rule. Whatever gift you receive, you have to use it.” I suddenly feel old as fuck.

“Are you all remembering that I’m an old man pushing forty?”

“All the more fun,” Faith teases. I should’ve kept my mouth shut. Coop is going to crucify me.

“Okay, old man river. I’m going to be in my thirties next year. Is this what I have to look forward to?”

“I could still take you down on and off the field, Danford!”

“I just let you think that. I wouldn’t want you to bust a hip trying to keep up with me.”

“You’re right. I wouldn’t want to injure myself walking to the closet to get my Hall of Fame jacket. You don’t have that problem.” Verbal sparring with Coop is one of my favorite pastimes. Only the three Fs give me more pleasure—Faith, fucking, and football.

Coop flips me the bird before grabbing four shot glasses from the kitchen and a bottle of tequila from my not-so-secret liquor cabinet. Handing us each a shot glass, he fills them to the rim.

“To our festive wager. May Secret Santa bring you everything you want this Christmas, and maybe some stuff you don’t. To us… the naughty and the nice!” 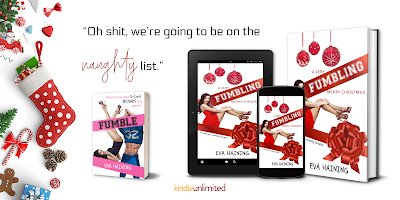 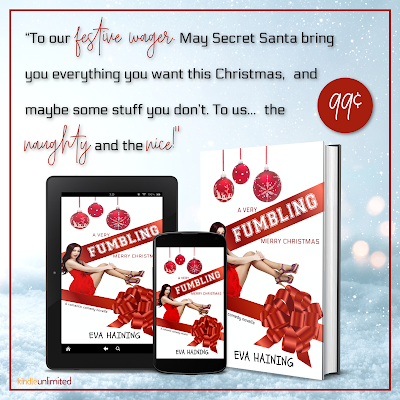 I'm happiest when wandering through the uncharted territory of my imagination. You'll find me curled up with my laptop, browsing the books at the local library, or enjoying the smell of a new book, taking great delight in cracking the spine and writing in the margins!

Eva is a native Scot but lives in Texas with her husband, two kids, and a whizzy little fur baby with the most ridiculous ears. She first fell in love with British literature while majoring in Linguistics, 17th Century Poetry, and Shakespeare at University. She is an avid reader and lifelong notebook hoarder. In 2014, she finally put her extensive collection to good use and started writing her first novel. Now writing in three sub-genres of romance, Eva is currently working on some exciting new projects for 2021. 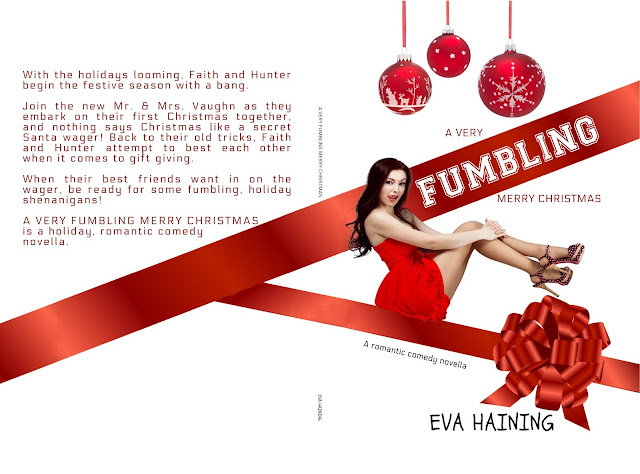