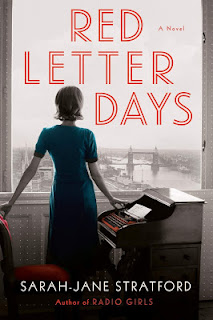 A striking novel from the acclaimed author of Radio Girls about two daring women who escape McCarthy-era Hollywood for London, where they find creative freedom and fight the injustices of the Red Scare.
Nineteen-fifties America is bright and full of promise, and Phoebe Adler, a New Yorker brimming with talent and ambition, is forging her way as the rarest of things: a female television writer in Hollywood. But fears of a growing Red Menace cloud the optimism, egged on by the hate-mongering of Senator McCarthy. A blacklist is created to cast out communist sympathizers, smashing careers and ruining lives. When Phoebe finds herself caught in the hysteria’s web, she flees to London.

Together Phoebe and Hannah successfully fight unfair bias and sexism, but danger still looms in this supposed sanctuary. And when their families and friends—their very lives—are threatened, they will have to make impossible choices.
My Thoughts…
Hollywood during the 1950s was a dangerous place to be.    Writers, directors, and actors were all being watched.   There were accusations of communism being written into productions to corrupt America.    Some of those blacklisted fled to other countries hoping to be able to continue working.    This is the story of Phoebe Adler who was blacklisted, subpoenaed and fled to London hoping to find a way to make a living.
I was not very familiar with this era in Hollywood but was intrigued at how quickly people pointed fingers just to save themselves and how quickly the American Government accepted those names without real proof and let others off the hook.  I was ashamed at how many Americans’ accepted this for the truth not bothering to find out what the whole story was.    I guess a time shortly after a war can change your outlook on life and your neighbors.
Phoebe was brave to step out on her own, in a different world than she was used to, and without any support from her friends.   I love how she took chances, weighed her options, and managed to still be okay.   This was not the life she wanted, and she knew she had to be cautious but she still lived, loved, and made something of herself.     The people she met in London were willing to help her, protect her, and guide her on ways to keep herself safe and I love that she was accepted into their family of blacklisters. 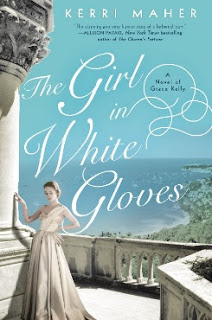 About the book
Grace knows what people see. She’s the Cinderella story. An icon of glamor and elegance frozen in dazzling Technicolor. The picture of perfection. The girl in white gloves.

But behind the lens, beyond the panoramic views of glistening Mediterranean azure, she knows the truth. The sacrifices it takes for an unappreciated girl from Philadelphia to defy her family and become the reigning queen of the screen. The heartbreaking reasons she trades Hollywood for a crown. The loneliness of being a princess in a fairy tale kingdom that is all too real.
Hardest of all for her adoring fans and loyal subjects to comprehend, is the harsh reality that to be the most envied woman in the world does not mean she is the happiest. Starved for affection and purpose, facing a labyrinth of romantic and social expectations with more twists and turns than Monaco’s infamous winding roads, Grace must find her own way to fulfillment. But what she risks—her art, her family, her marriage—she may never get back.
My Thoughts…
I say Grace Kelly and what comes to mind?   The Princess Grace Kelly is what I think of.  A woman who has the world available to her, living a charmed life, and wanting for nothing.   After reading The Girl in White Gloves I see a young girl trying to make it in a world that is stacked against her.    Everyone in her life is trying to mold her into what they want her to be and she is trying to find her own way.
While I realize this is fiction, there is much history within the story.   The famous actors and actresses that worked alongside Grace Kelly are real, their relationships are real, and their stories are important.   I loved how many of the names I knew but realized quickly how little I truly knew about the actors and actresses.   It was interesting how Kerri Maher was able to give some history on almost everyone in Grace’s life and how history makes the actor important in the shaping of Hollywood.
The Girl in White Gloves tells the story of a young girl who wants nothing more than to make everyone around her happy and to be accepted for who she is.    She is lonely, she is unhappy, and she needs to perform.   She performs on stage, on TV, and in movies but more she performs in her everyday life trying to be what everyone expects her to be.    I hated that most people did not realize that they were not being encouraging or helpful with their criticism but were beating a beautiful, talented young girl down.    Grace was strong enough to continue with her dreams, follow her heart, and make her life successful.
This is a wonderful historical fiction book about a person that everyone knows of but very few knew.   I loved getting to know Grace Kelly and learn about her amazing life. 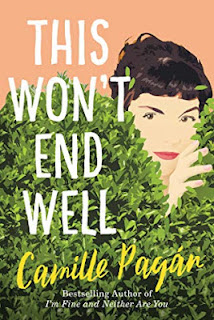 No new people: that’s Annie Mercer’s vow. It’s bad enough that her boss sabotaged her chemistry career and her best friend tried to cure her with crystals. But after her fiancé, Jon, asks for space while he’s gallivanting around Paris, Annie decides she needs space too—from everyone.

Yet when Harper moves in next door, Annie can’t help but train a watchful eye on the glamorous but fragile young woman. And if keeping Harper safe requires teaming up with Mo, a maddeningly optimistic amateur detective, who is she to mind her own business?

Soon Annie has let not one but two new people into her life. Then Jon reappears—and he wants her to join him in France. She’s pretty sure letting anyone get close won’t end well. So she must decide: Is another shot at happiness worth the risk?
My Thoughts…
Annie Mercer is a little bit of a geek with her love of science and as her life falls apart around her, she finds herself looking for a job, wondering if the wedding is going to happen, and helping her mom stay safe.   Then she meets Harper, after swearing off new people, and things start to change.
Annie must make decisions.   Does she follow her heart or her head?   Should she give her fiancé, Jon, a second chance?    What about the new person in her life that makes her laugh, smile, and have fun?   Annie is so real as she works through her life, she makes decisions, and has second doubts about those decisions.     I loved seeing her take chances, step back and reconsider, and most of all find out what she really needs.
Camille Pagan writes a book that lets the readers connect with the characters, follow them on a real-life journey, and cheer them on at every choice they make.    I am a fan of her writing and look forward to more from Camille.
Posted by A Soccer Mom's Book Blog at 6:00 AM