REVIEW of One Fatal Mistake by Tom Hunt 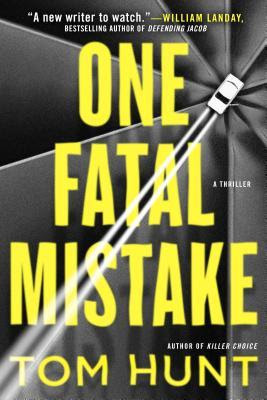 Her son accidentally kills a man.
They cover it up.
Then everything goes wrong.

When eighteen-year-old Joshua Mayo takes a man's life in a horrible accident, he leaves the scene without reporting the crime to the police. He hopes to put the awful night behind him and move on with his life. But, of course, he ends up telling his mother, Karen, what happened.

Karen has raised Joshua on her own in Cedar Rapids, Iowa--and she'd thought they'd finally made it. He was doing well in school and was only months from starting college. After hearing his dark confession, she is forced to make a choice no parent should have to make, one that draws them both into a web of deceit that will change their lives forever--if they make it out alive....

One Fatal Mistake is my first Tom Hunt book.    I wasn’t sure what I was getting into when I picked it up and I was hoping for the best.   While some of the choices that the characters make and the way things come together had me going yea… that would never happen, I couldn’t stop reading.   I was so enthralled with the story and caught up on the drama of Josh, Karen, and the rest of the characters that I just couldn’t put the book down.

There are thrills, suspense, teenage fear, and horrendous choices made by all involved.    While this is a thriller, I would say it isn’t as much a thriller as I expected.   I was able to predict how the story would go for the most part but I still couldn’t stop reading.   I was hooked from the beginning to the end and am excited to read more from Tom Hunt.


Purchase your own copy at Amazon or Barnes and Noble

**Thank you Lauren Burnstein at Berkley, Penguin Random House for a copy of the book in exchange for an honest review.

As of December 1, 2009, According to The Federal Trade Commission (FTC), product reviewers on blogs must disclose whether they received products for free or received payment for their review. The books I review on this site (A SOCCER MOM'S BOOK BLOG) are sent to me by publishers, authors or downloaded from Netgalley. This is a very common practice. I never take payments for these reviews and all the reviews on this site are my own thoughts and feelings and are not influenced.