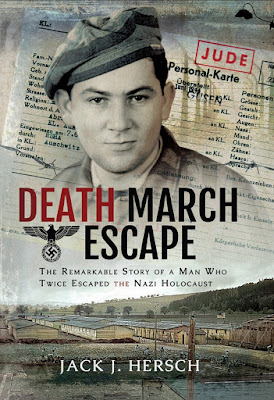 Surviving one Nazi death march is amazing, surviving two is astonishing. But escaping from both is nothing short of a miracle. Jack Hersch grew up hearing the stories of how his father, Dave Hersch, twice escaped the brutal death marches forced on concentration camp prisoners by the Nazis at the end of World War II. What he didn’t know about his father’s experience was the incredible confluence of luck, fate, and will to survive that made Dave unique in the history of the Holocaust, which is illuminated in DEATH MARCH ESCAPE: The Remarkable Story of a Man Who Twice Escaped From the Holocaust (includes 40 photos and four maps, published by Frontline Books; January 19, 2019).

A few years after his father died in 2001, a cousin in Israel informed Jack that a mysterious photo of his father had surfaced—on the website for Mauthausen Concentration Camp. Unlike many of the brutal depictions of concentration camp survivors recorded by Allied troops, this picture was a headshot of Dave as a smiling teenager modeling contemporary clothes. Where did this photo come from, and how did Mauthausen’s museum acquire it?

The answer to this mystery would take dedicated detective work and require Jack to confront the unflinching truth about the most nightmarish concentration camp in all of World War II—so very different from the colorful escape stories his father related every Passover. To learn how that photo was tied to Dave’s courageous struggle for survival, Jack would walk in his father’s footsteps, face the horrific reality of the Mauthausen and Gusen concentration camps where Dave was held, and stand on the roads where his father made his incalculably daring bids for freedom.

More than a memoir, biography, or history, DEATH MARCH ESCAPE is a page-turning account of what it takes to survive with your soul intact and to never surrender. It’s a love letter from a son as he captures the true meaning of heroism and a warning for anyone who would ignore the brutal lessons of history.

I love to learn more about WWII and am always looking for more books to read.  Usually, I read fiction books with the history of that era weaved into the story.   This is a firsthand look at a man’s journey in life through WWII and the Nazi rule.

Death March Escape is a personal story that shares the facts of two men.   One man lived through WWII, lived in concentration camps, walked death marches, and shares the story with his son.    The other man is the son, who after his father passes away decides to visit the areas where his father lived during WWII; he visits the concentration camps and walks the paths that his father did.      I was more interested in the father’s story but the son seemed to keep the spotlight more on his thoughts, his worries, and his travels.    Even when sharing his father’s story he talks of what he was feeling and what he thought his father meant in telling his story.

This is a unique and detailed story that shares what it was like living through the Nazi’s rule.  How a person in a concentration camp was treated, what their thoughts were when they were being kept in a camp, and how it was shared with their families.    If you are a WWII enthusiast, if you are curious as to what real people lived through under Nazi rule, and if you are looking to enhance your concentration camp knowledge pick up your own copy of Death March Escape.   It is not an easy or quick read but it is interesting and told in a way that will keep your interest from the very beginning.

JACK J. HERSCH is an expert in the field of troubled and distressed companies. He is a strategic advisor to corporate management and investment institutions, has served as a corporate board member, and has guest lectured at the business schools of M.I.T., U.S.C., and U.C. Berkeley, among others. This is his first work of non-fiction.  deathmarchescape.com