REVIEW of The Extraordinary Life of Sam Hell by Robert Dugoni 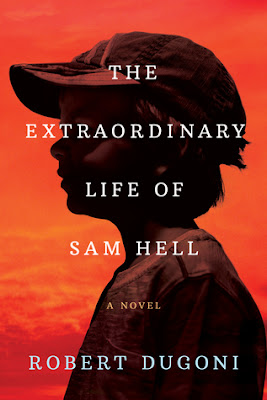 Sam Hill always saw the world through different eyes. Born with red pupils, he was called “Devil Boy” by his classmates; “God’s will” is what his mother called his ocular albinism. Her words were of little comfort, but Sam persevered, buoyed by his mother’s devout faith, his father’s practical wisdom, and his two other misfit friends.

Sam believed it was God who sent Ernie Cantwell, the only African American kid in his class, to be the friend he so desperately needed. And that it was God’s idea for Mickie Kennedy to storm into Our Lady of Mercy like a tornado, uprooting every rule Sam had been taught about boys and girls.

Forty years later, Sam, a small-town eye doctor, is no longer certain anything was by design—especially not the tragedy that caused him to turn his back on his friends, his hometown, and the life he’d always known. Running from the pain, eyes closed, served little purpose. Now, as he looks back on his life, Sam embarks on a journey that will take him halfway around the world. This time, his eyes are wide open—bringing into clear view what changed him, defined him, and made him so afraid, until he can finally see what truly matters.

The Extraordinary Life of Sam Hell is a book that tells the story of a young boy bullied in school, protected by his mother, made to be a man by his father, and loved by his true friends.     I found it unique that it was a story told by the main character in both the present time and the past.    The present time was telling the story of his youth so the reader was able to see how the past shaped the man he is today.

I loved how protective Sam’s mother was of him.    She didn’t shield him from life rather she stood up for him, showed up that although he was “special” he did not deserve to be treated differently, and loved him entirely unconditionally.      There were times I wanted him to stand up to her or for her to step back and let him live his life but I also am a big believer that if a parent doesn’t stand up for their child who will.  Mrs. Hill proved that to be true.    With all my raving on Mrs. Hill do not forget Mr. Hill.    He worked hard for his family, stood behind Sam’s choices, and stood up to his wife when it was needed.   He taught Sam to be a man and not to be coddled all the time.    Mr. Hill was not a hands-off father, he was a dad who loved, protected, and taught important life lessons to his son.

I felt like the most important people of the story were Mickie and Ernie.   These two were his first friends in school, the friends he kept through his entire life, and the friends that as an adult were still in his corner.    These are also the friends that Sam stood up for when things did not go their way, they were true friends.   No matter where life took them the three of them kept in contact and maintained their friendships.

This is my first Robert Dugoni book but definitely not my last.    I started The Extraordinary Life of Sam Hell one night and could not put it down.   It is a book that I look forward to recommending to my friends.

Purchase your copy on Amazon or Barnes and Noble