My Dear Hamilton: A Novel of Eliza Schuyler Hamilton 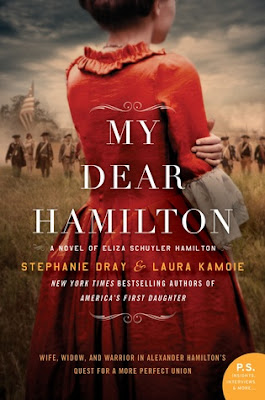 From the New York Times bestselling authors of America’s First Daughter comes the epic story of Eliza Schuyler Hamilton—a revolutionary woman who, like her new nation, struggled to define herself in the wake of war, betrayal, and tragedy. Haunting, moving, and beautifully written, Dray and Kamoie used thousands of letters and original sources to tell Eliza’s story as it’s never been told before—not just as the wronged wife at the center of a political sex scandal—but also as a founding mother who shaped an American legacy in her own right.

Coming of age on the perilous frontier of revolutionary New York, Elizabeth Schuyler champions the fight for independence. And when she meets Alexander Hamilton, Washington’s penniless but passionate aide-de-camp, she’s captivated by the young officer’s charisma and brilliance. They fall in love, despite Hamilton’s bastard birth and the uncertainties of war.

But the union they create—in their marriage and the new nation—is far from perfect. From glittering inaugural balls to bloody street riots, the Hamiltons are at the center of it all—including the political treachery of America’s first sex scandal, which forces Eliza to struggle through heartbreak and betrayal to find forgiveness.

PRAISE FOR MY DEAR HAMILTON
“My Dear Hamilton is a superbly written, meticulously researched homage to the birth of America as seen from the eyes of a woman who helped bring it to life. Eliza Schuyler Hamilton is much more than a Founding Father's wife; she's a passionate patriot who finds the strength to steer her tempestuous husband away from his own worst instincts even when he betrays her. At once a wartime drama, a woman's coming of age, and a lesson on politics that resonates in today's world, My Dear Hamilton is the book of the year.”
— Kate Quinn, USA Today bestselling author of The Alice Network

“Following their stunning success in America’s First Daughter, Stephanie Dray and Laura Kamoie have penned an unforgettable story of the woman behind Hamilton… MY DEAR HAMILTON is a masterpiece that is both intimate in detail and epic in scope—a triumph!”
—Pam Jenoff, New York Times bestselling author of The Orphan’s Tale

“Not since I read Erik Larson’s Dead Wake have I had such an edge-of-my-seat immersion into historical events. No study of Alexander Hamilton would be complete without reading this book and learning the true source of the great man’s strength—his wife.”
—Karen White, New York Times bestselling author of The Sound of Glass & The Forgotten Room

“Eliza Hamilton assumes her rightful place as one of America’s founding mothers as she guides first her husband and then her fledgling nation into the annals of history. My Dear Hamilton is historical fiction at its most addictive!”
—Stephanie Thornton, author of The Tiger Queens

“An incredible, surprising, and altogether lovely tribute to the woman who stood beside one of the most unknowable, irascible, energetic, and passionate men wo contributed to the foundation of this nation.”
—Lars Hedbor, author of The Path: Tales from a Revolution

“My Dear Hamilton is a fascinating work of historical fiction, beautifully crafted and richly detailed. If you think you already know Eliza Schuyler Hamilton, her role in the founding of our country, her marriage, and her heartbreak, you’ll marvel at the woman you meet in this compelling novel.”
—Jennifer Chiaverini, New York Times bestselling author of Mrs. Lincoln’s Dressmaker and Enchantress of Numbers

“From the first pages of My Dear Hamilton, the words ‘In the secret seethings of my discontented heart’ I was pulled in and swept away by this epic tale. Beautifully written and meticulously researched, this stunning novel captures the courage, strength, and kindness of the remarkable woman behind Alexander Hamilton. A fascinating read!”
—Ellen Marie Wiseman, international bestselling author of The Life She Was Given