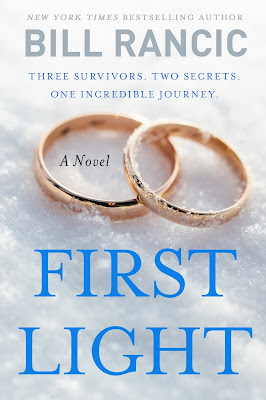 A father from Chicago takes a road trip to the city of Whitehorse, in Yukon Territory, with his wife and son. During the car ride, they reveal to the boy their harrowing experience surviving a horrific plane crash in the wilderness ten years before, which is how the boy, in fact, came to be born.

Set amid the deep, wild woods of the Yukon, First Light tells the story of Daniel Albrecht and Kerry Egan, young lovers leaving a work trip in Alaska to plan their wedding back home in Chicago. Not long into their trip, both engines of their plane catch fire and send them careening into a mountainside in the middle of a terrible snowstorm. Kerry is seriously injured in the accident, and it soon becomes clear that search-and-rescue teams aren’t going to find the survivors in time to save her. Daniel—the one person with survival experience amid the passengers—makes the courageous decision to find help and bring it back to the rest of the passengers, hoping against hope he might save the woman he loves. He leaves Kerry in the care of their coworker, Phil Velez, himself seriously injured in the crash, and takes off into the woods to find a town, a house with a telephone, a road. Something.

But Daniel’s choices are made all the more difficult by the presence of his boss, a stubborn man more interested in results than taking care of people. Only one man will come out of their trek alive, but it still may not be in time to save Kerry and the others back at the crash site, slowly dying from their injuries.

As the parents’ story draws to a close, the truth about the boy’s life, and the identity of his father, will at last be revealed.

First Light kind of had two story lines, one in the present where a mother and father were telling their son what brought them together and another in the past which was the story of how they ended up together.    I thought I could predict how the story would go.   There were parts I had right but there were many more that I was in awe of what these characters went through just to survive.

First Light is a warm, loving, story with a family that has a secret it has to share and a son who manages to embrace that secret and understand exactly how lucky he is to have such wonderful parents.

Thank you Elena Hershey, Senior Publicist at G. P. Putnam’s Sons ▪ Penguin Random House for a copy of the book in exchange for an honest review.

Purchase the book at Goodreads,   Amazon,   or Barnes and Noble.

“First Light is gripping from the very first page. It's a powerful novel of love, heroism, redemption, and ordinary people in extraordinary circumstances. But at its core it's a beautifully written story of the human heart emerging from the brink of darkness. Emotionally engaging from beginning to end, I had to keep reminding myself to breathe. This is a book to savor, and one that will linger in your heart long after you turn the last page.”—Karen White, New York Times bestselling author of Flight Patterns

“A captivating and harrowing debut. . . First Light is, at its core, a story of love and family, told within an engrossing page-turner about endurance and hope.”—Booklist

“A heartfelt, touching family story about love and sacrifice. . . The setting and events are vividly described, and the bone-chilling cold and despair of the passengers is palpable. . . Uplifting.”—RT Book Reviews

Bill Rancic burst onto the national scene as the first-ever winner of the NBC hit series The Apprentice. More than ten years later, he continues to wear many hats as a television producer, bestselling author, television personality, and restaurateur. Rancic currently spends his time speaking to corporations and organizations around the world on motivational and business topics; developing real estate as part of his multi-million-dollar enterprise in Chicago; co-owning RPM restaurant group, whose restaurants currently include RPM Steak in Chicago and RPM Italian with locations in Chicago and Washington, D.C.; and producing and appearing in several television programs, including those produced by him and Giuliana as part of You and I Productions, the production company they established in 2008. In addition, Rancic’s numerous philanthropic activities include building homes for victims of the 2010 earthquake in Haiti, and serving as an active board member for the Mercy Home for Boys and Girls in Chicago.

Rancic’s previous books include the New York Times bestselling business book You’re Hired: How To Succeed in Business and Life, which chronicles his successes, experiences, and proven advice, and the co-author with wife Giuliana of I Do, Now What? in which the two share their secrets to everlasting love. He is also the author of a young readers’ book, Beyond the Lemonade Stand, which seeks to educate and motivate young people worldwide about the value of money and how to leverage skills, talents, and abilities at an early age, with all proceeds from the book’s sale going to charity.

Bill and Giuliana, who married in 2007, live in Chicago and Los Angeles with their son, Duke.