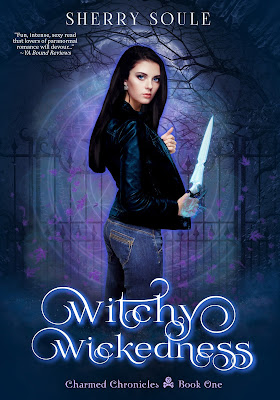 WITCHY WICKEDNESS (book 1)
Genre: Urban Fantasy / Horror / Romance / Humor
Age Group: young adult & teen & adult
Charmed Chronicles on Amazon: https://www.amazon.com/gp/product/B078H7SDZ9
•*¨*•.*.•*¨*•
For readers of Paranormalcy series by Kiersten White and fans of Buffy, the Vampire Slayer!
Ravenwood, California isn’t like other coastal towns. It’s a mystical place built over a gateway into Hell, with some extremely unusual residents. And Shiloh Trudell isn’t like other girls—she’s a teen witch who can sense the things that go bump in the night.
When Shiloh gets a visit from a shadowy demon threatening to steal her family’s spellbooks, her life quickly spirals into one of unending weirdness and danger. As if life isn’t complicated enough, she takes a job at the local haunted house, where she meets the sinfully hot Trent Donovan with massive amounts of swoon-inducing charm. With his insanely green eyes and a crooked smile, Shiloh can’t deny the red-hot chemistry between them.
Yet Shiloh’s forced to put romance on hold to embrace her destiny as guardian of the Charmed Chronicles. That is, if she can evade a kooky ghost on a revenge haunt, contain the scary dark power tainting her magick, and survive attacks by a pack of creeptastic demons first.
For poor Shiloh, life’s a real witch.
Will she gain the courage to face all the monsters in Ravenwood, and become the hero she was destined to be?

Wow!! What an amazing book. This is the first book in the Spellbound series and I cannot wait for more. Sherry Soule wrote a young adult book that grabbed me, a not so young adult, from the very beginning. I loved Shiloh. A true teenager, with self doubt and worries about not fitting in, and how she wanted to be like by her peers and respected by her parents. I did feel sorry for her due to her lack of good adult role models. Her parents were quite losers, a mother who ignored her and a father who only saw what he wanted to. Then she met Trent…oh Trent. As a teenager he is what every girl wants. Hot, bad boy, and unattached. I loved watching the two of them dance around each other while trying to figure out what the other was thinking or feeling. The memories came flooding back of my high school relationships.

The mystery and history of Fallen Oaks kept me having to read more. I needed to know if any other teenagers would go missing, would Trent and Shiloh fall in love and live happily ever after? The demons and witches are exactly what I enjoy reading about and this book was perfect. The plot twists and turns are what kept me going late into the night reading. With each twist and turn I was pulled in deeper and deeper.

I have to recommend this book to young adult readers and older reader alike. Book two cannot come soon enough.

Thank you Sherry Soule for a copy of the book for my honest opinion.

Purchase your own copy at AMAZON

Today author, Sherry Soule has some exciting news to share! The thrilling Charmed Chronicles has been updated and expanded.
•*¨*•.*.•*¨*•
Hold onto your holy water, folks.
From bestselling author Sherry Soule comes the heart-pounding, genre-defying tale of Shiloh, the snarky, teenage witch. Dive into her epic origin story with rogue demon slayers, über-cool magic, swoony love triangles, page-turning supernatural battles, and loads of toe-curling kisses.
This young adult urban fantasy series is a humble slice of awesomeness packed with more plot twists than a demon's intestines and more drama than the Kardashians. It's all kinds of creeptastic awesomesauce!
•*¨*•.*.•*¨*•
To help promote these new editions, Sherry is doing this guest post to share the news with fellow booklovers.
Sherry has put together four fun facts about her popular YA series. In this fun post, you can learn more about the supernatural mythology that makeups the eerie world of Ravenwood….

Shadow People are usually vague human shapes, completely black or dark in color, with no discernible facial features. Sometimes they appear as mere silhouettes, generally lacking any characteristics of gender.
However, there are many types of shadow beings; there are hooded shadows, cloaked ones, solid or wispy, and even smoky shapes. They dart into corners, through walls, into closets, or behind bushes, and buildings. Sometimes they simply fade into the dark recesses of the night. Lacking in the description is one common denominator unifying the many different types of Shadow People that enter our world—they are all thought to be “intensely dark.”
The Merriam-Webster dictionary defines paranormal as an adjective meaning “not scientifically explainable.”
Shadow People are ominous creatures that were once slaves of a band of fallen angels. When they rebelled, the Fallen hexed these creatures to spend eternity in a hell dimension. A few have found a way to slip through the gateway. The real worry is—what happens if they ALL escape?

One of my inspirations for the über spooky town in my YA series was the video game, “Silent Hill.” Readers of the Charmed Chronicles have often wondered if the town had a real-life counterpart, and if there was a particular town that inspired the haunted area, we’ve come to know and fear in the books…
Actually, there have been many speculations, and now here’s a place you can actually visit for REAL...
So, while researching the different elements of Ravenwood and looking for a foggy and woodland area, I came across Marin County in California. The popular SF Bay Area tourist spot planted the seed for what developed into what we’ve come to know as, Ravenwood. The coastal town is actually located in the Madrone Woodlands near Larkspur, California neighboring Muir Woods. (You need to use a Bing map to locate the region.) It was the ideal spot for the many different paranormals that populate this town…
Echoes of the tragic disappearances still plague the town. When the season passes and all the tourists leave, the haunting memory of past events once again shatter the peace of the inhabitants of Ravenwood...

Fun Fact #3
Werewolves and Lycans (shortened form of the word lycanthrope, which means shape-changer) are two completely different species. The terms are definitely NOT synonymous. The werewolf can only transform on a full moon, and they represent more of witchcraft and curse, unlike the lycan who can transform into a wolf at will. The lycan species are also considered shapeshifters, but can ONLY shift into wolves—not into other animals. Lycans are also capable of walking on their hindquarters, and are much more muscular than werewolves. Lycans and werewolves do share these qualities; they both have enhanced physical attributes, enhanced strength, reflexes, coordination, speed, and regenerative abilities. However, these traits seem to apply to lycans, even when in human form.
Furthermore, lycans can retain their human intelligence and personalities while transformed, whereas werewolves become pure animal, devoid of any memory regarding their actions once they shift. Silver is the lycans only weakness, as they seem to be violently allergic to it.

A Grimoire, or in some cases it’s called a Book of Shadows (BoS), is used to store magical information, like a textbook of magic spells, rituals, supernatural-related data, and invocations. Some grimoires can even be a sort of magical journal that keeps a record of a witch’s magical experiments and exploits.
Overall, a grimoire is used predominantly by Wiccans; however, this does not mean that those outside of Wicca can’t use a grimoire. Nor do you have to be in a coven, like the Blood Rose Circle or Generation Hex.
I used the grimoire concept in a different way in my YA series about a teenage witch, where the magical book is used more like that of a diary and contains prophecies, a demon index, and spells, which was written by her ancestors and passed down through the generations.