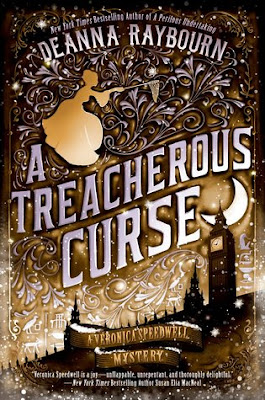 Members of an Egyptian expedition fall victim to an ancient mummy's curse in a thrilling Veronica Speedwell novel from the New York Times bestselling author of the Lady Julia Grey mysteries.

London, 1888. As colorful and unfettered as the butterflies she collects, Victorian adventuress Veronica Speedwell can’t resist the allure of an exotic mystery—particularly one involving her enigmatic colleague, Stoker. His former expedition partner has vanished from an archaeological dig with a priceless diadem unearthed from the newly discovered tomb of an Egyptian princess. This disappearance is just the latest in a string of unfortunate events that have plagued the controversial expedition, and rumors abound that the curse of the vengeful princess has been unleashed as the shadowy figure of Anubis himself stalks the streets of London.

But the perils of an ancient curse are not the only challenges Veronica must face as sordid details and malevolent enemies emerge from Stoker’s past. Caught in a tangle of conspiracies and threats—and thrust into the public eye by an enterprising new foe—Veronica must separate facts from fantasy to unravel a web of duplicity that threatens to cost Stoker everything. . . .

Oh Veronica Speedwell… I adore your stories.     Your wit, your fire, and your partner in crime Stoker always pull me in and make me forget everything while I enjoy your stories.      A Treacherous Curse is no exception.   I started the book with only a short time available to read and found myself looking for stolen moments where I could get more of the story.

The mystery that is given to the characters to solve kept me guessing at who was guilty.     I made guesses, changed my mind, and then changed it again.   I am proud to say that before the end I had a final guess and was at least partially correct.      The best part of me changing my mind was reading all the clues and following the path that Deanna Raybourn took the reader on.   There were so many twists and turns that I was never sure that I was following the correct path.

Thank you Loren Jaggers at Berkley for a copy of the book in exchange for an honest review.

Purchase your copy at AMAZON or BARNESAND NOBLE

Check out the first two books in this series

A Perilous Undertaking Book Two HERE
Posted by A Soccer Mom's Book Blog at 3:00 AM