Island of Glass (The Guardians Trilogy #3) by Nora Roberts 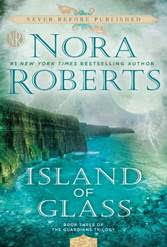 The final Guardians Trilogy novel from the #1 New York Timesbestselling author of Bay of Sighs and Stars of Fortune.

As the hunt for the Star of Ice leads the six guardians to Ireland, Doyle, the immortal, must face his tragic past. Three centuries ago, he closed off his heart, yet his warrior spirit is still drawn to the wild. And there’s no one more familiar with the wild than Riley—and the wolf within her…

An archaeologist, Riley is no stranger to the coast of Clare, but now she finds herself on unsure footing, targeted by the dark goddess who wants more than the stars, more than the blood of the guardians. While searching through Irish history for clues that will lead them to the final star and the mysterious Island of Glass, Riley must fight her practical nature and admit her sudden attraction to Doyle is more than just a fling. For it is his strength that will sustain her and give her the power to run towards love—and save them all…

Island of Glass is based primarily in Ireland on the Island of Clare.     The guardians travel to Bran’s home to make their home base while searching for the final and third star.     This location is tied to Doyle.   It is the place of his youth.   It is also the place where his young brother died and his life was never the same.    The location is mystical.     The cliffs, the crashing sea, the forest and gardens, and the house itself with towers, spiral staircases, and a library are all described with so much detail that as a reader I could picture it perfectly.

I have read the first two books in this series and Island of Glass continued this amazing story right where the others left off.      The story of Bran, Doyle, Riley, Sasha, Sawyer and Annika is continued perfectly.    I enjoyed their relationships with each other, both romantically and as friends.    I enjoyed how these 6 came together as strangers and formed friendships that were pushed to the limits and formed romantic relationships that seemed impossible at the beginning.      The respect, love, and sense of family was shared throughout the entire story.    Even when at odds over what the next step should be they never let anything get between them.     Each of the characters is unique yet together they work perfectly.     Their distinctive personalities lead towards building their friendships and finding the final star.

This series is wonderful.    The Guardians Trilogy does have to be read in order but they are fun reads.       I recommend picking up all three of the books.