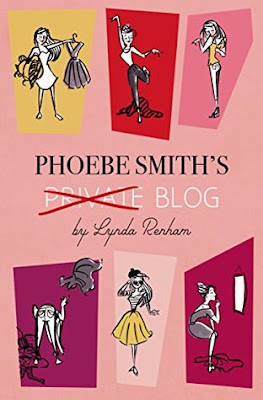 Fashion conscious Phoebe Smith wants only one thing: a date for the works party in six weeks’ time. She embarks on a journey to find her man and keeps a private blog of all her disastrous encounters. But when her four-year-old nephew gets into her account, Phoebe’s problems only just begin. With Tinder calamities, a male escort and a pork pie addiction, Phoebe tackles her biggest problem: the just too irritating Harry Bloom. Come with Phoebe on her search for the perfect man and see who will accompany her to the party in this hilarious romantic comedy novel.

Oh my… in true Lynda Renham style I was laughing out loud so many times while reading Phoebe Smith’s Private Blog.   Everything from the writings on the blog to the characters to the different locations Phoebe visits made me smile and laugh.      Phoebe starts a private blog which “brat face” manages to change to public while playing on her computer.    She tells her thoughts, her feelings, and her wishes on this blog much like you would a journal.    Then the whole world sees it.    It starts a motion again sexual harassment in the workplace, opens eyes to relationships, and points out some truths in family relationships.

The friendships in this story really stuck with me.   Whether dealing with the loss of a boyfriend, dating a married man, becoming pregnant, or having a private blog go public these friends stuck together.    The cheered each other on, consoled them when things didn’t go their way, and pushed them to be all they could be all without ever expecting anything in return.     I loved their impromptu get-togethers, whether at Phoebe’s apartment or at a bar/restaurant.     Phoebe and her friends were TRUE BLUE friends.

The relationship between Harry and Phoebe was my favorite.     She hated him without giving him a chance because of what she read about him on the internet.       Yet, every time she ran into him she liked him more and more.      Their relationship was slow, never easy, and so enjoyable to the reader.      I liked how Harry persisted on helping Phoebe when she was in need, a car jump, a date, or a meal.      I was definitely hoping that Phoebe would open her eyes are realize that Harry was a good guy before he gave up on her.

I definitely recommend picking up your own copy of Phoebe Smith’s Private Blog.